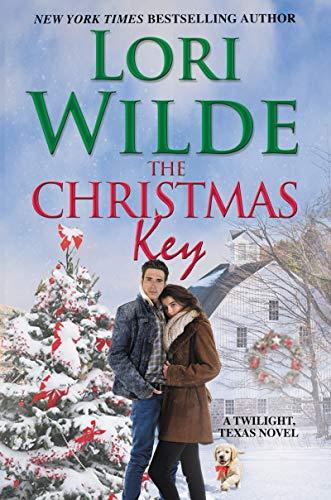 I missed my deadline, so I’m not sure if this will be published on Thanksgiving or after, but I certainly hope you’ve had a lovely day filled with love and many things to be thankful for.
I’ve been in El Paso for over a month, and am finally home after a quick detour in Olathe, Kansas (my mom’s hometown) for a family get-together to say good-bye.
We’ve had a bit of family drama—there’s always some, isn’t there?—but overall, everyone has been lovely and embracing, and we’re very grateful to have had the chance to visit with Mom’s siblings and cousins.
Of course, speaking of gratitude, I think if you’re reading this, you’re probably very grateful that some of your favorite writers are putting together great stories for us to read, yes?
So a few things to read now or look forward to in the next month or two…
For those of you looking for some Christmas reads, now that we’re into the season, here’s a good one.
Lori Wilde’s THE CHRISTMAS KEY continues the Twilight, Texas series, and Wilde brings her unique combination of romance, healing, and a touch of faith to these books.

There’s a legend in Twilight, Texas. If you sleep with a kismet cookie under your pillow on Christmas Eve, you will dream of your one true love.
She saw him in her dreams . . .
It’s impossible! Naomi Luther was standing face-to-face with the man she’d dreamed about over a year ago. Was it the magic of kismet Christmas cookies that brought him to her? Or is there an even greater force at work? All Naomi knows is she is falling, hard and fast, for the one man all good sense says she should not have.
She was his buddy’s sister . . .
Rebellious Mark Shepherd found order in the Marines but chaos on the battlefield. In a mission gone wrong, Mark is injured and one of his fellow soldiers loses his life. Haunted by guilt, he arrives in Twilight to keep a solemn promise. But when the Luthers mistake him for their handyman, he’s swept up in playing Santa to his buddy’s orphan son . . . and falling hard for Naomi’s irresistible bright spirit and sweet, sexy smile. But what will happen when she learns the truth?

The tension between Mark and Naomi is immediate and sexy, if unwelcome, but watching the characters untangle their messy, conflicted emotions is fun and touching. Kirkus (review here) called it “Another Twilight, Texas, Christmas romance filled with warmth, spirit, and healing,” and I won’t argue. Wilde’s empathetic, compassionate look at PTSD and the sheltering embrace of Twilight is always worth a read, especially at Christmas.
Julia Quinn’s THE OTHER MISS BRIDGERTON: A Bridgertons Prequel came out this week, and what an interesting and fun departure for JQ–pirates!

She was in the wrong place...
Fiercely independent and adventurous, Poppy Bridgerton will only wed a suitor whose keen intellect and interests match her own. Sadly, none of the fools from her London season qualify. While visiting a friend on the Dorset coast, Poppy is pleasantly surprised to discover a smugglers’ hideaway tucked inside a cave. But her delight turns to dismay when two pirates kidnap her and take her aboard a ship, leaving her bound and gagged on the captain’s bed…
He found her at the wrong time...
Known to society as a rascal and reckless privateer, Captain Andrew James Rokesby actually transports essential goods and documents for the British government. Setting sail on a time-sensitive voyage to Portugal, he’s stunned to find a woman waiting for him in his cabin. Surely, his imagination is getting the better of him. But no, she is very real—and his duty to the Crown means he's stuck with her.
Can two wrongs make the most perfect right?
When Andrew learns that she is a Bridgerton, he knows he will likely have to wed her to avert a scandal—though Poppy has no idea that he is the son of an earl and neighbor to her aristocratic cousins in Kent. On the high seas, their war of words soon gives way to an intoxicating passion. But when Andrew’s secret is revealed, will his declaration of love be enough to capture her heart…?

JQ is known for witty banter, and Andrew and Poppy don’t disappoint. Their chemistry is immediate and obvious, and the fact that Andrew is clearly falling under Poppy’s unorthodox spell only ratchets the sexual tension higher. Quinn also weaves in tidbits about architecture and puzzle making, while focusing nearly entirely on Andrew and Poppy’s growing regard, then love, for each other. (Kirkus–review here–gave it a star.)
I loved it.
And since we’re talking pirates, I found Shana Galen’s THE PIRATE TAKES A BRIDE in my library’s Overdrive audio collection, so I took a listen. (I think this is the new & revised version.)

Ashley Brittany is living a nightmare. She’s been mistakenly married to the one man she despises. Months ago, Lord Nicholas took her virtue then scorned her. Now, Ashley will do anything to have her revenge...anything but expose her ugly secret.
Nick Martingale has a secret, too: he’s Captain Robin Hood, a pirate with a fearsome reputation. But when Nick learns his archenemy, the Barbary pirate Yussef, attacked innocents Nick has sworn to protect, he can think of nothing but vengeance.
Only one person stands in his way.
His wife.

I really liked it too. I love Galen and she does pirates pretty well too! Again, tons of chemistry, a swashbuckling plot—complete with a sea battle!—plus a sigh-worthy ending.
So enjoy friends! I feel incredibly thankful for so much these days, even while I’m very aware of some huge losses. Counting my blessings, and am very thankful for all of you!
#HappyReading #ThankfulForBooks
MORE FEATURES
POPULAR KIRKUS STARS