We talk to the creators of The Prince and the Pee 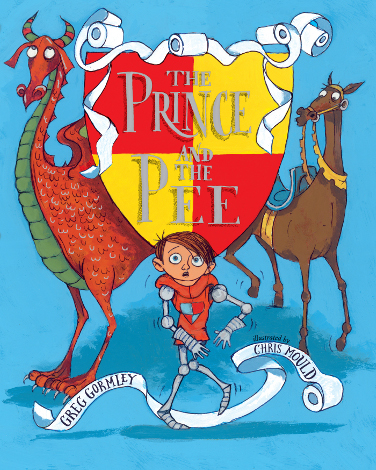 The titular character of Greg Gormley and Chris Mould’s The Prince and the Pee uses singular pronouns to pronounce the royal wee.

“They hadn’t gone very far when Prince Freddie felt a tingling,” writes Gormley, of Cambridge, England. “ ‘I need to pee,’ he said. Sir Rushington sighed. ‘Your Royal Highness, you should have gone before we left.’ ”

What Prince Freddie has done, before leaving vacation at the behest of Sir Rushington, his avuncular horse, is drink an entire pitcher of the lemoniest lemonade. En route to saving Castle Crumbly from a dragon attack, his earnest attempts at relief are thwarted by an ogre, a princess, and a long line of fairy tale favorites, congregating at the forest’s most popular tree latrine.

“We’ve all needed to go to the bathroom at some point when it was not appropriate,” says Mould, of Yorkshire, who charged at the chance to illustrate Gormley’s humorous text. “If you’ve got children, or you’ve just got pets, or if you’re like me and you’re getting old and you need to be near the toilet, it’s one of those universally funny ideas.”

So, too, is the juxtaposition of Prince Freddie’s blunt desperation with Sir Rushington’s well-heeled cool:

“For a long time, I’ve wanted to have that kind of partnership,” Gormley says, “—a Jeeves and Wooster or a Vakera and Mowgli, where one is obviously the more parochial character, but the relationship is maybe a bit more avuncular. I wanted one of them to have that high voice that sometimes can sound archaic but, in this instance, is perfect.”

Despite the fact that their country is far smaller than our own, Gormley and Mould have never met. An attempt at international three-way calling on the occasion of our interview proved disastrous; so they have never, to my knowledge, spoken by phone. Yet, they proved a perfect partnership for the project and have many kind things to say about one another’s work.

For example: Mould’s playful acrylic illustrations manage to be both gothic and good-humored, which isn’t easy to achieve, says Gormley, who’s also an illustrator.

“There are illustrators that work in a gothic style,” he says, “who find it difficult, nigh on impossible, to translate that into picture books, because they can’t achieve the character and the sweetness that’s required. Chris is the go-to illustrator for that. He really marries the two perfectly. I’m looking at the book as we’re talking, and looks of desperation on Prince Freddie are just priceless.”

“I always like anything that’s silly and funny,” Mould says. “[You can] have fun with that, take it anywhere. The nice thing is that [The Prince and the Pee] has got some key traditional children’s book elements—there’s an ogre in there, there’s a dragon in there, there’s a castle—and, at the same time, there’s a fresh look at a fairy tale.”

Mould’s style is “all the things I loved and grew up with,” in art and literature, he says, “kind of mashed into one crazy sort of feel. It is very much gothic horror versus humor and lightheartedness with a bit of darkness.”

A sidesplitting, leg-crossing frolic for children and parents alike, Kirkus calls The Prince and the Pee,“Hap-pee-ly–ever-after reading fun.”