Halo: Not Your Standard Superhero Tale 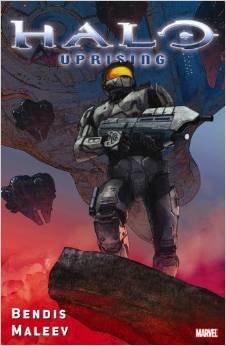 This week I wanted to go somewhere different—not always easy in a comic book world dominated by DC and Marvel. I’ve been reading a lot of their stuff though, and digging it. Still, I found myself wandering the aisles of my local Barnes & Noble looking for anything that wasn’t your standard superhero tale (gosh, go figure?). Much to my surprise, I found it in the pages of a Marvel published book, Halo: Uprising by Brian Michael Bendis and Alex Maleev.

Just now, I started to type, “I’ve never read a video game tie-in comic book before” and realized that’s completely untrue. One of my favorite, short-lived comic series published by DC in the mid-’80s was called Atari Force. The plot revolved around the kids of the original Atari Force Team leader, Martin Champion, who had searched the galaxy for habitable worlds for the human race to migrate to from a dying Earth. Being exposed to radiation during that journey caused Champion’s son to have certain powers and abilities allowing him to phase in and out of our dimension/reality. The stories of the original Atari Force were featured in mini-books shipped with certain Atari 2600 video games, and then later as a stand-alone comic series from DC, along with the sequel, which I collected. Atari Force was a great book! I often tell people about it, so why wouldn’t I give another book based on a comic a shot?

Which brings me back to the comic book aisle at B&N. But let’s be honest—it’s really more of a single shelf at the end of the isle. There, Halo stood out to me. I’m a fan of the video game and have played it since Bungie launched it with Halo: Combat Evolved. There’s just something about the Master Chief, and the war between Earth and The Covenant, that pulls you in and hooks you.

The events of Halo: Uprising take place between Halo 2 and Halo 3, and gives us a different point of view from the Halo universe normally dominated by the Master Chief. When the Covenant invade Earth, they don’t waste time, leveling city after city. Except for Cleveland. In Cleveland, they invade and gather hostages. Ruwan is the concierge at an upscale hotel. All he wants is to get out alive. Myras is a famous stylelight player. They are thrown together in their attempts to escape. And aboard a Covenant Forerunner, the Master Chief is captured and interrogated. He learns the Covenant are looking for something called The Key of Osanalan. When Ruwan hears that same name from the Covenant on Earth, he is shocked. He knows exactly what it is.

Can the Master Chief stop the Forerunner in time? Can Ruwan convince the USNC on Earth he knows what the Covenant are looking for before it’s too late?

This book is good, gritty military sci-fi. I like that they put us on Earth during the invasion, and let us see things through the eyes of someone other than the Master Chief. I think telling this story from solely the Chief’s point of view, the way they do in the games, wouldn’t have worked. It would have been too constricted and confining. By giving us Ruwan and Myras to identify with, the whole Halo universe opens up just a little.

The story also benefits from their presence due to the fact we know the Master Chief won’t die. No, he can’t die. He’s the Master Chief. Without him, there’s no Halo. But Ruan and Myras can be hurt. They can die. The people around them can be in real danger, which leaps off the pages as we watch the Covenant invade Earth. Having these points of view amps up the tension, and that’s a very good thing.

The art is dark and gritty—appropriate for war. The use of shadows is interesting, and contrasts the scenes with the Master Chief, which tend to feel brighter and filled with color. The book contains interviews with the artist and writer, and something stood out to me from Maleev, who said, “It’s very tricky as I have a character who is in armor the whole time. Conveying the emotions is heavily dependent on body language, surrounding supporting cast and environment.” I get that. It came through loud and clear. After reading that, I went back through and looked at those Master Chief scenes again, at the nuances and extra details added in. Very well done. Made me wonder what an Iron Man book might look like if Tony Stark never took the armor off, and we never got a glimpse inside the helmet. Another thought that came to mind was the iconic G.I. Joe #21, Silent Interlude. An entire issue from Snake-Eyes’ point of view. And, being a mute, there weren’t any word balloons or thought boxes. Everything was conveyed through the art.

Halo: Uprising collects issues 1-4 of the series with interviews, sketches, variant covers and more as extras. If you’re a fan of the game, or military sci-fi, you’ll enjoy this one.