Have Some Holly, Jolly YA 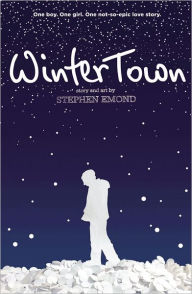 Every year, there are a bunch of new Christmas-themed hardcovers by bestselling adult-market authors—this year I’ve seen new or repackaged stocking-stuffer-sized books by Debbie Macomber, Jennifer Chiaverini, and Anne Perry. There are always a plethora of romance paperbacks, and the new picture books are so numerous that a stack of them would probably go to the moon and back.

see them in the YA section, though. They pop up occasionally, most recently* with last year’s My True Love Gave to Me: Twelve Holiday Stories (if you’re looking for a solid collection, this one got a starred review from Kirkus!), and there was also Let It Snow: Three Holiday Romances, which came out way back in 2008. As in the adult market, there are always some holiday-themed paperback releases—and I have tattered copies of R.L. Stine’s Silent Night and Silent Night 2 to prove it.

So, just for kicks, here are a few YA titles with ties—some more tenuous than others—to the Yuletide season:

The Theory of Everything, by J. J. Johnson

A girl struggling to make sense of the death of her best friend—among other things—gets a job at a Christmas tree farm. I loved this one for Sarah’s voice; for the lovely mix of sad and happy, serious and funny, thoughtful and snarky; and for the collage format, which includes tons of charts and diagrams and drawings and handwritten notes.

He-said/she-said about friendship, romance, and art: childhood friends Lucy and Evan are separated by divorce, and now only see each other at Christmas, when Lucy visits her father. Like The Theory of Everything, this story is interspersed with drawings—but in this case, they’re mostly comic book panels.

Confessions of the Sullivan Sisters, by Natalie Standiford

On Christmas day, the Sullivan matriarch tells the family that she is A) dying, has B) cut everyone out of her will, but C) will reinstate everyone if she gets an apology from the person who insulted her so horribly. The problem is, she doesn’t specify which family member is in the doghouse…and since everyone has something to be guilty about, everyone has to confess. Funny, charming, quirky, easy-going.

is one centered around the Strand Bookstore in New York City. Adorable, fun, funny, adventurous, and sweet.

Fingerprints of You, by Kristen-Paige Madonia

The first is a story about a girl who gets pregnant and sets off on a roadtrip to find the father she’s never met; the second is about a girl who goes to Paris with her father, finds the 200-year-old diary of another girl, becomes fascinated by her story, and desperate to know more. Neither of these is particularly about the holiday season, but both take place over Christmas break.

It's a Wonderful Death, by Sarah J. Schmitt

A Mean Girl Queen Bee type is accidentally reaped too early, and her time in the afterlife forces her to reconsider her life, her actions, and the possibility of redemption. The title alone merits inclusion on this list, but the storyline gives nods to A Christmas Carol as well as It’s a Wonderful Life.

Narrated by the new girl in town, this one is about a group of grocery store employees on Christmas Eve. Someone steals the money out of the charity box, and everyone working is stuck there until someone figures out who the culprit is…or confesses.

The Kirkus reviewer was none-too impressed with this o

ne, but as it’s a steampunk retelling of The Nutcracker, onto the list it goes.

About that Night, by Norah McClintock

A CHRISTMAS MURDER. Of the few titles on the list that I haven’t read yet, this is the one I’m planning on reading first—I love McClintock’s crime stories.

A girl is sent to spend Christmas with relatives at an inn in Maine. A HAUNTED INN IN MAINE.

Themed or not, do you have go-to YA books that you gift again and again? Let me know what they are!

*At least, this was the most recent one I could find—let me know if I missed something!