Let us not hope in vain. 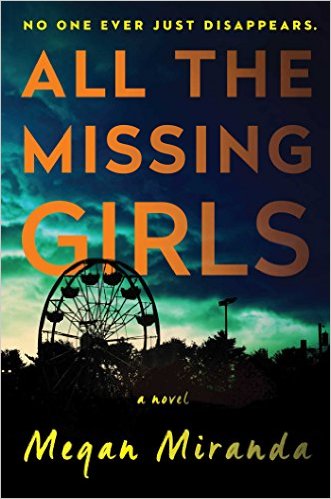 Just as the cheerful holidays were ramping up, I asked our editors to wax dyspeptic. What publishing trends do you hope disappear in 2017, I asked them, entirely aware that books appearing in 2017 have already gone to press. They answered the same question at the end of 2015, but given the unsettling events of this year, they got right on it this time around; responding felt cathartic. We’re running our editors’ thoughts at length this year because of the variety of their thoughts. My teensy hope for 2017, related to our fiction editor Laurie Muchnick’s response below, is to reduce the number of fiction books with “Daughter,” “Sister,” and “Wife” in the title, such as The Time Traveler’s Wife, a long-going trend that feels so hackneyed by now. Whatever your hopes for 2017, all of us are looking forward to evaluating and discovering books with you in the coming year. Happy New Year!—Claiborne Smith

I'd love to see an end to novels with the word "girl" in the title. When books sell as many copies as The Girl with the Dragon Tattoo, Gone Girl, and The Girl on the Train, publishers naturally jump to the conclusion that it's all about the girl. This year we got to the bare bones of the trend—Emma Cline's The Girls—but we also got The Girl from Venice, The German Girl, The American Girl, Tokyo Girl, The Girl from Summer Hill, The Girl from the Paradise Ballroom, The Girls in the Garden, The Lost Girls, All the Missing Girls, Radio Girls, and Sarong Party Girls, among many, many more. How about some books about women in our post-Hillary world?

I’ve always loved political satire, from A Modest Proposal to the most recent Saturday Night Live parodies of the presidential debates. Few elections have provided more fodder, but now the stakes are too high, or maybe my own tender feelings are too raw, and the pickings are too easy. So, for the moment, I’m voting for less mockery and more calls to action. I’d love to see a conversational guide to effective organization and activism mixed with (since I can’t go cold turkey) Tom Tomorrow–style cartoons.

Not so much a trend but a now-entrenched industry practice: the “X meets y” elevator pitch. “The Handmaid's Tale meets Lord of the Flies”; “feminist Frankenstein meets Grey's Anatomy”; “The Thing About Jellyfish meets Counting by Sevens”—what do these mean, when you really look at them? A dystopian meditation on women's physical agency set on a desert island populated by marooned English choirboys? An overworked, overweening woman doctor reanimates Patrick Dempsey's corpse and then flees to the Arctic? A mildly obsessive grieving child is orphaned and adopted by a ragtag band of adult outsiders whom she then makes into a family for a heartwarming conclusion? Add them all up, and it's tempting simply to imagine that they are all “derivative meets derivative,” which doesn't strike me as any way to advance the literature. When I'm able to imagine a book's elevator pitch as I'm reading it, it's a very bad sign.On the other hand, it does make for a mildly enjoyable parlor game: imagine “In the Year of the Boar and Jackie Robinson meets The Hunger Games with a soupçon of I Am the Cheese as if Adam were really Percy Jackson” for a geeky good time.

Does the world need another 900-page biography of Adolf Hitler? Perhaps, but probably not—and I’d be willing to bet that 2017 brings one. Does the world need another book about the coming threat from China or the impending crash of the stock market? Perhaps, but given how poorly prognostications have been working lately, I’m not sure I really need to see it. Another 900-page Tolkien-esque worldbuilding novel? Another postmodern reinvention of the rules of plot, language, and logic, and in two dozen volumes? Another—shudder—teen vampire/werewolf/zombie/wizard romp? No, no, no. For me, if the promised politics of the day hold true, 2017 will be a year of hiding under a blanket and rereading classical histories of declining empires. So another translation of Herodotus, Xenophon, or Livy? Yes, please, even if it’s 900 pages long.

1. Any book in which the author whines about the plight of white Americans. Whiteness is alive and well in the U.S., and now we all have to live with the Donald. 2. Adult coloring books: I shouldn’t need to say any more. 3. Thick histories of European royalty. If there is a 20-page appendix featuring a character list and a complicated family tree, count me out.

Esoteric thrillers: Did someone even die? Were they killed by their own regret? How many people with borderline personality disorder can possibly live in one off-season tourist town? Are they ghosts? You never said.

Twin protagonists: One is good; one is evil (the left-handed one). One is Truth and one is Beauty. They have asymmetrical haircuts—worse if they are wise children who speak in a Victorian style.

Obvious sensual detail: Is a barroom redolent of juniper and pine? Does the microphone smell like a beer? Do your twins reek of freshly pressed pinafore? I suspect they do.

The words “tinny” and “nipple.” Let's stop "gaining purchase" and "secreting" things away.

LEAVE ELENA ALONE 2017:Yes, the Ferrante Fever runs deep, but I often feel a little wary when I see tenuous comparisons between “provocative,” family-centered sagas prominently featuring female friendships (and unfolding against curiously bucolic landscapes) and Elena Ferrante’s inimitable four-volume Italian epic. I don’t blame you for trying, but by making the assertion that your novel will be the next Neopolitan novel (or, likewise, My Struggle), you may be setting the bar a little too high.However, false promises aside, I’m all for more humanizing fiction and incisive, beautifully written sagas that face issues of race, class, and sexuality head on. Keep those coming!

In Kirkus’ Word on the Street interviews with publishers, agents, and librarians, one point that keeps coming up is how tired everyone is of vampire tales. Recently, I heard that a TV adaptation of Anne Rice’s Vampire Chronicles was in the works, so I reread the book that started it all: 1976’s Interview with the Vampire. I was struck by how fresh it must have seemed when it first came out. Rice, in her very first published work, drew on the hoary old Dracula mythology to create an utterly unique saga of passionate, angst-ridden immortals. Instead of merely aping what came before, she transformed an entire genre—and that’s a worthy goal for any writer working today. Hopefully, we’ll see less imitation and more inspiration in the coming year.

No more books about the real author of the plays attributed to William Shakespeare.  Countless volumes have explored the question of who wrote these monumental works. Some promote “the boy from Stratford” (as Charlie Chaplin, a doubter, called Shakespeare). But others present alternative candidates, including Sir Francis Bacon, Sir Walter Raleigh, Christopher Marlowe (who supposedly faked his inconvenient early death), and Edward de Vere, 17th Earl of Oxford—a popular choice, with the 2011 film Anonymous resoundingly backing him. What next? That the playwright was a theater-loving archangel, a sly Martian stagehand, or a venerable vampire who witnessed all the events chronicled in the histories? Making a persuasive case for any of these figures requires a powerful imagination, something that the boy from Stratford, according to literary critic Harold Bloom, certainly possessed.

There have been many books out recently about the assassination of JFK. Authors share “never before seen” evidence that the verdict was wrong. That the killer is still out there. That the killer is, in fact, not one but many individuals conspiring to end Kennedy’s life. The current political climate is so dense with conspiracies, treachery, dishonesty, and corruption that perhaps it’s time now to move on from Kennedy’s assassination (which doesn’t mean forgetting or minimizing its impact) and look to the future to prevent the governmental and social hiccups to come.