A Historical Romance with a Dose of Badassery 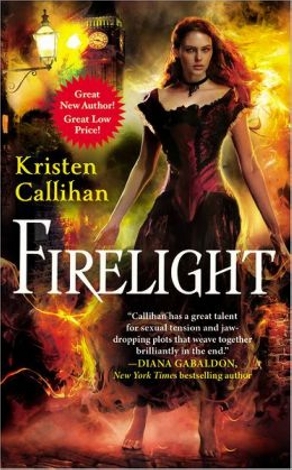 Right now, and I hope for a bit longer, Firelight by Kristen Callihan is on sale digitally for $1.99. I bought it last week, thinking that, after reading the comments from all the readers who loved it, I should have read it already. I love layered historicals—in any time period: Victorian, Regency, Georgian, whatever—and I like fierce women. Most reviews said this book had both, plus paranormal elements. It's a mix of historical, fantasy, paranormal and general ass-kicking.

Y'all. It was so good. I feel like a complete tool that I didn't read it sooner.

What charmed me initially was the very conventional historical aspects of the story. In the beginning, the heroine, Miranda, is cornered in an alley by two street thugs after being followed by a man who is fascinated with her. Miranda likes to fence—as in with swords, not turning over stolen goods; that's later—and her mysterious follower saw her sparring in the street at night. (As you do.) The mystery dude is stunned by her, specifically by the fact that she's not afraid.

Some years later, he reappears in her life by arranging to marry her—and by "arranging," he pretty much purchased her from her (morally and financially) bankrupt father.

So on the surface, it's an arranged marriage for mostly financial reasons, between a mysterious dude and a young woman with a secret to hide—and neither his mystery nor her secret are very obvious from the beginning. It could be any dark, gothic historical at that point. Their secrets could have been anything. He's got an ex-wife hidden in his attic, maybe. She's hiding 16 million pigeons from a drug smuggler. (As you do.)

Except that the hero, Archer, wears a mask and half of London society thinks he's a killer or possibly the actual devil. He's probably not—but he is hiding something. And Miranda has a rather hot secret to keep from him, and everyone. So in addition to the conventional historical parts, the arranged marriages between strangers and the questions of how society interacts with them and vice versa, there's a paranormal mystery layered on top. The paranormal elements are hinted at, but aren't fully deployed until much, much later in the story, well after I'd begun to sympathize with Archer and Miranda.

I confess that, for awhile now, I've been tired of paranormal romance. I've been over vampires or were'd out in my romance reading for a good while, and it took either characters I was already invested in or a story that was hugely unique for me to try a new paranormal. This book was the perfect antidote to my para-weariness. The historical elements were in the forefront of the story for so long that by the time the truly paranormal elements got there, I didn't care and was more curious about them than dreading them. The stakes were high enough that I needed to know what happened, and I knew how Miranda and Archer's respective secrets and abilities might motivate their actions, so I couldn't stop reading.

The paranormal elements in this book were, for me, like sneaking something unexpected into an otherwise terrific casserole. And it wasn't just the blending of elements that made me so happy. Callihan has some skill when it comes to revealing in pieces the hidden sides of her characters: enough to keep me curious but not enough that I can guess. There were a lot of things I didn't guess in this book—and that was the best surprise of all.

Have you read Firelight? It's still on sale at these retailers:

And have you read the rest of the series? Should I go get them right now, right away, what am I waiting for?

Sarah Wendell is the co-creator, editor and mastermind of the popular romance blog Smart Bitches, Trashy Books. She loves talking with romance readers, and hopes you'll share your new favorite romance reading recommendations. You can find her on Twitter or on her couch, most likely with her eyeglasses turned toward a book.