Hope in the Time of Parasite 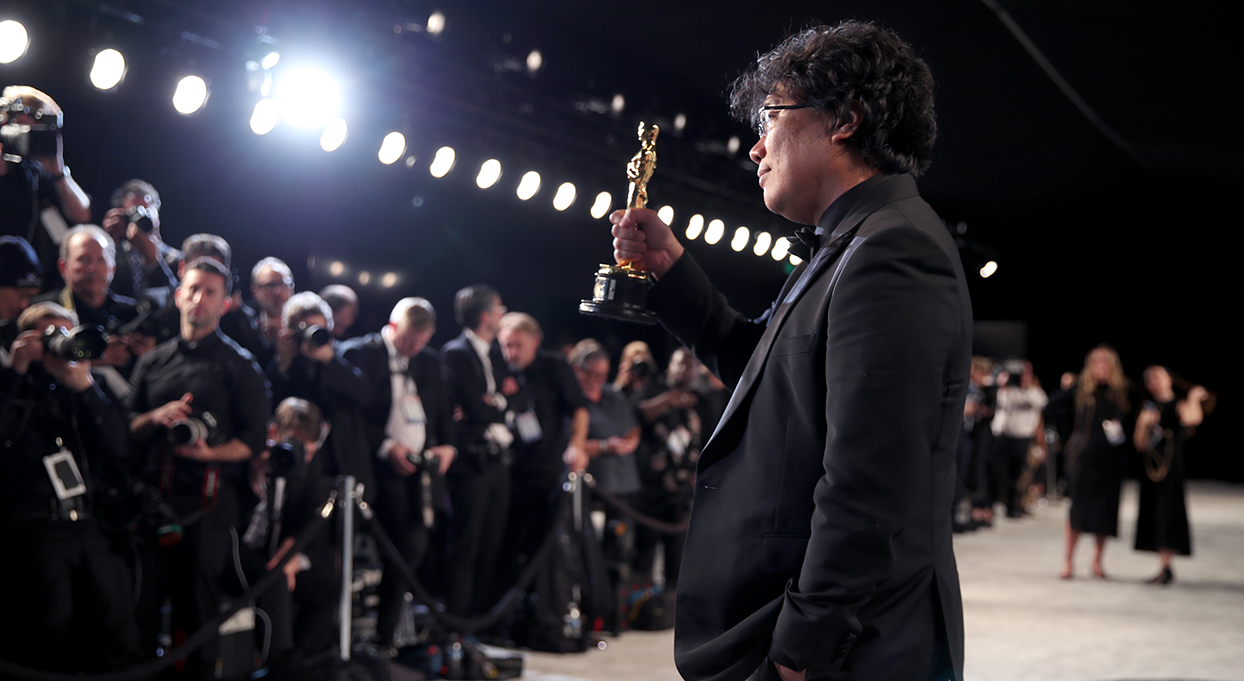 Like much of the world, I could have passed out when filmmaker Bong Joon Ho walked up to the Academy Awards stage not once, not twice, but four times to collect his well-earned Oscars for Parasite. The humility of Bong’s speeches touched me, because they felt familiar to the lessons my Korean immigrant parents taught me when receiving praise: Don’t brag. Don’t hold your head high. Do give credit to your superiors and elders. (In other words: Don’t go acting all American.) I’m not even a Korean national, but Parasite’s fete feels like a collective win for all of us—in America, in the world—of Korean descent.

#Korea, or so Twitter tells me, is trending. Parasite is mentioned with the same breathiness as K-pop sensation BTS or Psy, he of “Gangnam Style” fame. When Bong’s win for Best Original Screenplay was announced, the camera panned immediately to a wildly clapping Sandra Oh, who is also of Korean ancestry. I love her, can’t get enough of her, but when I stopped to think about it, the shot felt a bit like a non sequitur. As if Martin Scorsese had won, and the camera cut randomly to Giada De Laurentiis, eating a bowl of spaghetti.

The Parasite moment is being called “seismic,” “history-making.” Headlines tout, Change Is Coming. So long, #OscarsSoWhite. People on social media are speculating about the “trickle-down” effect the film’s wins will have on Hollywood and, by extension, the publishing industry.

How easy it would be to join in on all the yays and yahoos, the metaphorical tossing of hats into the air. Instead, I’m filled with anticipatory dread. Not because I didn’t think the accolades were merited (the cinematography alone stunned, not to speak of the film’s brilliant genre-blending and social commentary). Call it pessimistic realism, but I thought: Oh God. Don’t let this just be a lip-service diversity moment that’s over in a heartbeat.

I’ve been asked what Parasite means for Korean and Korean American storytellers. I’ll be honest: While I hope for the best, I’m also preparing myself for no change at all to the status quo.

We all remember the buzz that attended the release of the Crazy Rich Asians film adaptation. All Asian cast! Big Hollywood budget! Watershed moment! I was fangirling hard, as were all my Korean, Chinese, Singaporean, Vietnamese, Indian, and Pakistani American writer friends. (Talk about lack of diversity: Apparently I have no Japanese American writer friends.)

Our Great Asian Hope rested collectively on the success—or failure—of that film. I even felt like an unpatriotic jerk for panning the book’s literary merit in the Guardian back in 2013 (#awkward). I braved the crowds on opening night—in the theater, when I’m more of a Netflix-and-no-chill kind of viewer—to support the Cause.

It was over in a blip.

Don’t get me wrong. I’m grateful, even for the blip. And perhaps, behind the scenes, Crazy Rich somehow paved the path for Parasite. But the pessimist in me is worried. Two major films about Asians might be considered too many; perhaps our quota has already been met. And whether in Hollywood or in book publishing, the fact is, what’s brewing in the zeitgeist dictates what will or will not sell.

Amidst the praise for Parasite, there are naysayers rearing their heads, giving voice to the fears I’ve harbored since childhood. A female member of the Academy said in The Hollywood Reporter, “I don’t think foreign films should be nominated with the regular films” (italics mine).

Jon Miller, the conservative journalist tweeted, “A man named Bong Joon Ho wins #Oscar for best original screenplay over Once Upon a Time in Hollywood and 1917. Acceptance speech was: ‘GREAT HONOR. THANK YOU.’ Then he proceeds to give the rest of his speech in Korean. These people are the destruction of America.”

A man named Bong Joon Ho wins #Oscar for best original screenplay over Once Upon a Time in Hollywood and 1917.

Then he proceeds to give the rest of his speech in Korean.

These people are the destruction of America.

Part of me will always be the insecure Asian girl sitting in the second-grade classroom where no one, not even my teacher, could locate Korea on the pull-down map. And I was born and raised in Queens, New York—not Bumblebleep, Kansas.

When Seoul hosted the Summer Olympics in 1988, I felt an unbridled exuberance. My life would forever change! The kids would finally stop asking, “What’s Korea? Is that like…China/Japan?” (Back then, we were all one and the same.) Finally, I’d get to be regular.

But the change I so longed for did not materialize. The questions didn’t stop. Of course, I was still asked, “Where are you from? No, where are you really from?” Not long ago, I spoke at a book festival in Brooklyn where someone in the audience asked why I didn’t speak English with an accent.

As a Korean American writer—I’d argue, even as a hyphenated American writer—we still have to explain who we are and that our stories deserve attention. We still feel as if our voices only matter when our culture (and whatever is culture-adjacent) is reduced to a hashtag on social media. We still receive feedback in the publishing industry—even after the Crazy Rich moment—citing difficulties in finding a “wide readership” for stories like ours, or are told there’s no market for our books in X place because “[insert name of other Asian or Asian American writer here] didn’t sell well there,” so. And we’re still just expected to deal with it.

Korean American writer Marie Myung-Ok Lee, whose first YA novel, Finding My Voice, almost didn’t sell, tells me about being rejected by all the houses, “including one wherein they assured me they already had a book about Cambodia … by a white writer.”

Steph Cha, author of Your House Will Pay and other novels, puts it this way: “I don’t see the Parasite win as a win for Koreans or Korean Americans. It’s an examination of what it means to be human. And I think that’s a very positive thing.” She pauses, then quips, “Who knows what this will mean in the long term. Other than a few Korean American freelancers getting a few publications. Ha ha.”

(She’s referring to both of us separately being asked to write think pieces on Parasite.)

I’ll confess: Beneath my hardened cynical shell there is still a layer of optimistic mush. And I hope that this post-Parasite era will carve out more opportunities for writers like us—perennially, and not just for the blink of a media moment. (Never mind that stories such as mine bear a closer resemblance to My Big Fat Greek Wedding than Parasite.)

I’m hopeful that American readers and moviegoers alike will be able to get over the “one-inch subtitle barrier”—literal or otherwise.

I’m hopeful because Lee’s Finding My Voice, almost 30 years after its initial publication, is being reissued this year by Soho Press.

I’m hopeful because Parasite won its four Oscars—even among the “regular” nominees. Min Jin Lee, author of Pachinko, says it’s been “thrilling to witness Parasite’s global recognition.” I’m hopeful for the trickle-down message this sends to the public—haters be damned.

More than anything: I hope to prove myself wrong.

Patricia Park, author of the novel Re Jane, is a professor in the MFA Program at American University and writes for the New York Times, the Guardian, and others.