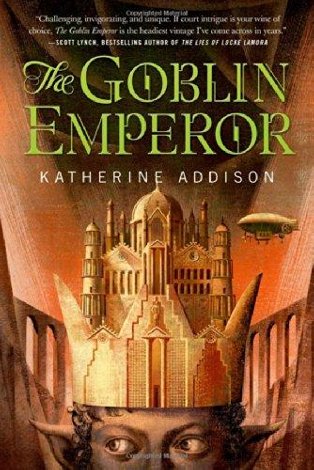 It is the week after November 8th—election day in the United States—and a day that shall for future generations represent a massive shift in American history and politics. In the wake of an election season full of bigoted rhetoric and the grim reality of a deeply divided country, something that I’ve been looking for is… hope.

The world may not be the place I thought it was a few days ago, but the science fiction and fantasy that I love and so desperately want to escape in shows me that there are ways out of the darkness. That there is hope, even when you think all is lost.

Here are science fiction and fantasy worlds, written by and featuring women, people of color, and LGBT voices. These are eleven stories that give me hope for the future—and I hope they will give you hope, too.

For the reader seeking an optimistic view regarding politics and leadership, try The Goblin Emperor by Katherine Addison. A young, ugly, goblin prince—the youngest and most despised of his siblings—inexplicably finds himself as the new emperor of the realm. With traitors, manipulators, and liars in his midst, Maia must navigate a realm of treachery and fear—but he does so with compassion and wisdom.

For the reader concerned with war and peace, try The Far Side of Evil by Sylvia Louise Engdahl. In this work of science fiction from 1971, a new graduate from the Federal Anthropological Service Academy is sent on her first mission: to observe and judge a distant planet, Toris, whose civilization is on the brink of nuclear war. The line between observation and interference is very clear—but in the face of a potential nuclear holocaust, Elena must do what is right.

For the reader looking for a classicalist-inspired speculative future rooted in history and Enlightenment, try Too Like the Lightning by Ada Palmer. Earth in the year 2424 is a radically different place than the Earth of 2016. Complete with flying cars and classic, golden age science fiction elements, this new Earth is rooted in philosophies from the age of Enlightenment, in the writings of Voltaire and Diderot. (I recommend reading this essay from Ada Palmer on writing SFF and hopeful futures.)

For the reader looking for the perfect blend of science and magic from the perspective of two outsiders before the apocalypse, try All the Birds in the Sky by Charlie Jane Anders. In a weird (really weird, but awesome weird) future Earth on the precipice of a natural apocalypse, two very different characters struggle to find their way: Patricia, a witch with magical powers and the ability to converse and control (in some ways) nature, and Laurence, a genius engineer on the precipice of a project that could save or damn humanity.

For the reader looking for pleasant, episodic SFF filled with characters who treat eachother with respect and competence in the workplace, try The Long Way to a Small, Angry Planet and A Closed and Common Orbit by Becky Chambers. A lot of the time, SFF can be bogged down in the grim and the gritty, with awful characters doing awful things to eachother (or good characters resorting to awful acts for the greater good). In Becky Chambers’ series, however, we see competent, intelligent characters supporting and working together to overcome problems—how often do you get to see that kind of teamwork in action?

For the reader looking for an advanced, alternate civilization that is peaceful, evolved, and made of awesome, try The Touchstone Trilogy by Andrea K Host. An Earth girl walks home one day and stumbles through a portal to a different planet—one whose inhabitants are Earthling-like in appearance, but whose society and technology is so far advanced from our own. Cassandra is a “stray”—one of the many displaced by the random gates opening between worlds, and in this epistolary-narrated trilogy, we follow her adventures.

For the reader looking for a hopeful reimagining of a historical atrocity, try Everfair by Nisi Shawl. A Neo-Victorian steampunk historical fantasy, Everfair examines Belgium’s colonization of the Congo and reimagines the event with steam-powered technology granted to the native peoples. A safe haven, the eponymous Everfair is purchased and becomes a home for not only the displaced and enslaved people of the Congo, but a respite for other slaves from America and Europe.

For the reader who wants to see a politician fight back and find a new future for herself and her beliefs, try Bloodline by Claudia Gray. Probably the best Star Wars novel I’ve ever read, Bloodline examines Senator Leia Organa’s fall from potential leader of the entire galaxy when she is outed as Darth Vader’s daughter, and the actions she takes to make sure that her people are prepared to fight against a new stirring evil in the form of the First Order. Leading up to the events of Star Wars: The Force Awakens, Claudia Gray’s take on Princess Leia—her strength, her competence, her grace in the face of bigotry and madness—is exactly the type of political hope I want to read about right now.