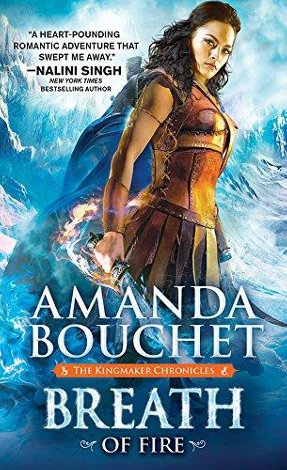 I’m writing from a very warm Orlando FL where I am attending a (non-book related) conference with my husband. Believe me when I say it feels surreal to be wandering around in shorts and sandals! I boarded the plane in Madison at 25 degrees with at least 4 inches of accumulated snow on the ground—and landed to a sunny 85.  (Not looking forward to the forecast of 11 when we get home on Friday.) At first giddy with the sun, my husband and I discussed the thought of moving to a warmer climate, but we agreed that right place for us is somewhere that has distinct seasons—even winter—so moving to the tropics is not in the cards. (However, we definitely see the appeal of January vacations!)

It occurs to me that some hot authors have books releasing in January, so I thought I’d mention them if you haven’t heard already.

First off is Amanda Bouchet’s Breath of Fire, the second in her Kingmaker Trilogy, which came out yesterday. The first, A Promise of Fire, was her remarkable debut, which landed on all sorts of Best of 2016 lists (including Kirkus’). I have to admit that after the first book, I was nervous to read the second, because really, it is so hard to live up to that, isn’t it? I am so pleased to say that the second was every bit as good as the first, and continued the mesmerizing story perfectly, while adding a bit more backstory to the world-building and explaining the Greek mythology tie-in in a way that makes even more sense. This is a terrific series that perfectly blends high fantasy with sexy, high stakes romance. You really should check it out if you haven’t discovered it already. Both books received Kirkus starred reviews, which give a bit more detail to the story and you should definitely read the first one before you start the second. (You’ll be able to follow the story of Book 2, but it will be more satisfying this way.)

Beatriz Williams (who may be my favorite writer right now) is releasing The Wicked City on Jan 17. I received an audio version from HarperCollins (thank you, HC!) and I really enjoyed the book, though this is clearly the start to a new series and a lot has yet to be explained. Still I love BW’s writing, and I thought her exploration of Prohibition NYC and rural Maryland through the eyes of Ginger, and her interesting connection to a possibly haunted building discovered by relatively modern-day Ella Gilbert (nee Schuyler) is set up in an intriguing way. I really enjoyed it (though the Kirkus reviewer wasn’t quite so keen). I also received an Overdrive copy of A Certain Age from my library the same week and simply loved it. “A Certain Age” refers to both the middle-age of the main character and the Jazz Age, and, in some ways, this may be Williams’ best book yet, even though it has very different tone and style than most of her work. (The Kirkus reviewer liked it too.)

As for the January releases I’ve put high on my own TBR/listened to pile, they include Patience Griffin’s It Happened In Scotland, a Christmas-themed addition to her highly popular Quilts & Kilts series that also released yesterday. “Christmas in the sleepy Scottish fishing village of Gandiegow this year is a time for quilting, patching up broken hearts, and rekindling an old flame….”

Kristan Higgins (finally!) has a new release at the end of this month (January 31), On Second Thought, another women’s fiction title (with high romantic elements, I expect) based in her fictional New York town, Cambry-on-Hudson that she established in If You Only Knew. The newest title also revolves around the complicated relationship between sisters. Can’t wait (since, honestly, haven’t we waited long enough?)!

Beverly Jenkins’ Breathless, the follow up to last year’s terrific Forbidden alsoreleases January 31: “A strong-willed beauty finds herself in the arms of the handsome drifter from her past, in this second book in the sizzling series set in the Old West.”  (It also received a Kirkus star.)

I hope to get audio of these last three titles, since I haven’t had the chance to read them yet, but one way or another I’ll be reporting back on them soon.

What are you reading or looking forward to this month?

(By the way, I did daily end-of-year giveaways on the Read-A-Romance Facebook page, and the last two titles I included were from Kristan Higgins – a choice of If You Only Knew or On Second Thought, after it releases – and three sets of A Promise of Fire and Breath of Fire. Those are open through tomorrow. You can find the Kristan Higgins drawing here and the Amanda Bouchet drawing here.)