The House Has Other Plans 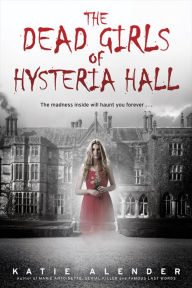 “Where are you going?” Dad asked.

“Of course we can. Where else would we stay?”

I stared at him in blank disbelief. “Um...how about anywhere that isn’t an abandoned mental hospital?”

One of the many reasons that Katie Alender’s horror stories are so enjoyable is that she knows the conventions of the genre—and so do her protagonists. they don’t exist in a horror-movie-free world, and they act accordingly. All of this KNOWING allows Alender to acknowledge and even use the tropes while also subverting them, which makes for a supremely entertaining reading experience. Maybe even more importantly, I’d argue that making her characters knowledgeable makes for a way scarier story—if the characters make smart choices, the reader doesn’t spend all of her time rolling her eyes at all of their boneheaded decisions. (Like, for example, GOING DOWN TO THE BASEMENT SOLO, or saying things like, “LET’S SPLIT UP.”)

And so, our heroine KNOWS that spending the night in an old mental institution—one that was rumored to be rife with mysterious deaths, abuse, and corruption, no less!—is a TERRIBLE idea, and that’s before she’s even positive that it’s haunted. When her parents refuse to leave—her father is so awful that he makes the stepfather from Wait Till Helen Comes look positively reasonable—she pretty much writes them off, and decides to escape on her own.

Sadly for her, the house has other plans.

Which brings us to the especially fun element in The Dead Girls of Hysteria Hall—Delia, our heroine, dies pretty early on in the story. After that, she discovers a whole set of new challenges and dangers, and when it comes time to do her heroine thing, she has to do it almost entirely behind the scenes, while interacting only minimally with the physical world.

Yes, there is some occasionally purple prose—“the pain in my chest expanded and crested, like a wave hitting the shore, while the tears burned my eyes like acid” is an especially good example—but lines like “I didn’t need some old-timey, know-it-all ghosts following me around dead-shaming me” are much more common. In other words, the vast majority of the book is told with Alender’s usual mash-up of smarts, scares, and humor. This book, like all of her other books, would make for a great miniseries. (Seriously, how has this not happened yet?)

Beyond all of the fun—I haven’t even mentioned the absolutely terrible-at-their-jobs ghost hunters or how idiom can be problematic when it comes to communicating with people from other eras—The Dead Girls of Hysteria Hall is a reminder that life isn’t always as long as we assume it’s going to be, and that it’s good to occasionally ask ourselves, “would I want those to be my last words?” It touches on our culture’s history of dismissing the voices of women—especially young women—and it shows how that dismissiveness isn’t a thing of the past, but is a modern-day frustration and yes, danger. Even with a dead heroine, though, and a story that deals with sexism and loss of one’s voice and with anger and loss and betrayal, it’s a story that’s ultimately about the power of love, forgiveness, and empathy.