The Accident Season and Other Tales of Distress 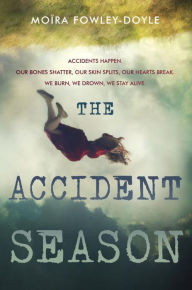 The accident season comes every October. That’s when Cara and her family become mysteriously prone to accidents: from small injuries to terribly tragic deaths and disappearances. They all miss Uncle Seth very much…they don’t exactly speak of their vanished stepfather.

In any case, the accident season is a fact of life and as such, every October, Cara, her mother, her sister, Alice, and her ex-stepbrother, Sam (who still lives with them), go to great lengths to prevent those accidents. The family cover themselves with layers and layers of clothing to avoid those small injuries. Drawers are locked, knives are put away, table edges are padded, and no one really uses the kitchen appliances that much.

This October is different though. This year, Cara’s best friend, Bea, tells them that this will be the worst accident season yet. Alice—who is spending a lot of time with Bea—seems too careless and constantly bruised; Cara’s feelings for Sam start to become unbearable; and then there is the question of Elsie.

Elsie, who appears in all of Cara’s photos, even those in which it is impossible for her to be there. Elsie, who used to be Cara’s best friend many years ago but who no one seems to have any real memory of. Elsie, who runs the secret booth at school and is always there until they start looking for her and now she’s nowhere to be found.

It’s hard to believe that The Accident Season by Moira Fowley-Doyle is a debut novel: it’s exquisitely written, beautifully portraying a picture of a family with far too many secrets and unspoken truths. So many that they shape reality itself. Is the accident season a real thing or a self-fulfilling prophecy? As the story progresses, and the secrets are unveiled, horrible truths come to light.

This is a book whose true storyline is better left unspoiled for the reader to discover its hidden depths. Suffice it to say that this is a story about lies we tell ourselves, lies we tell others, and the way that we sometimes protect our loved ones by hiding things from them.

So instead of delving too much into details, I will just say to read this excellent novel. Then go get these excellent read-alike novels:

We Were Liars by E. Lockhart. A story about a privileged group of kids and a powerful, rich family. A twisterific tale that explores the issues of memory, loss, friendship, and how privilege colors everything.

Charm & Strange by Stephanie Kuehn. A story about trauma with a brilliant structure and narrative that mimics the main narrator’s psychological state of mind as he tries to contain the wolf inside.

Jellicoe Road by Melina Marchetta. About a girl and her friends in the “now” interspersed with entries about another group of friends in the past. With a rich, extremely affecting and varied thematic core that includes threads of memory, lost innocence, young love. and more.

Imaginary Girls by Nova Ren Suma. Another unsettling psychological thriller that explores the bond between two sisters who share a twisted, co-dependent relationship. Add a ghostly submerged town and you have what feels like an episode of the Twilight Zone.

Bone Gap by Laura Ruby. A favorite book of 2015 and a story that delves into the difference between looking and seeing. It’s kind of like a subverted fairytale, examining beauty and the pernicious ways we look at and treat women.

Infandous by Elana K. Arnold. A concise, short novel about trauma and healing, looking at how there’s catharsis in the telling of stories and in the creating of art. It’s very discomfiting.

Liar by Justine Labalestier. Micah is a compulsive liar but she’s now about to tell you the absolute, complete truth about a murder. Most of the books and stories included here have unreliable narrators (catnip to me) but Liar is the most unreliable (I mean, it’s right there in the title), and it’s a complete delight.

“If You Were a Dinosaur My Love” by Rachel Swirsky. A Hugo-nominated short story that can be read online. The least said about it the better so that it keeps to its gut-punching momentum.

All of these traverse a Speculative Fiction line—although not all of them cross into it completely—to delve into hard topics while simultaneously being love letters to all types of relationships and the beautiful yet difficult bonds between people and, often, the healing power of storytelling.