The Prey of Gods by Nicky Drayden 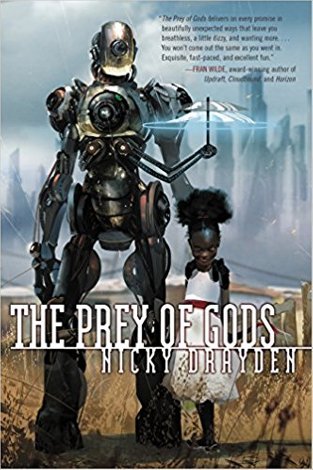 Nicky Drayden’s debut novel The Prey of Gods is a surprising cornucopia of genres and characters taking place in a futurist South Africa and with seemingly disparate, multi-layered storylines that slowly progress toward each other—just as the characters do. It’s a little bit surreal, a little bit weird, a lot of fun and wholly impressive.

It opens with childhood BFFs Muzi and Elkin discovering feelings for one another and having their first sexual experience after taking a new hallucinogenic drug that—unlocks? reveals?—their true selves. If you ever wanted to read a story featuring sex between a dolphin and a crab, this is your chance. Hey, I did say this was a bit surreal.

Just as this is happening: Muzi’s robot pal becomes sentient, an engineered virus spreads among a hoard of dik-dik, a pop star with Multiple Sclerosis takes the same drug and suddenly finds herself with powers she never knew she had, Muzi himself discovers he can control minds, a politician unlocks her true self just as she discovers her overbearing mother’s wishes for her are literally rooted on something else. Did I say this was a bit weird?

What brings it all together: an ancient demigoddess is sick and tired of not being powerful enough and decides to take charge and feed off the fear and pain of humans in order to regain her old powers. And THIS happens just as another demigoddess—a little Zulu girl who, in one clean swoop, loses everything she ever knew at the same time that she gains an enormous amount of power. Power enough to stop the brewing evil, to become the inspiration behind a robot uprising, to become the unwitting leader of a motley group of semi-powerful people fighting to save the world any way it takes (including a standoff in the middle of a pop concert and a trip to the otherworld). Fun, right?

The novel is framed in short chapters, each from one of these many characters’ viewpoint and it is all the more impressive that not only does all of this turn into a cohesive and whole ending, it also succeeds in beautifully developing this entire cast of characters. It really shows Nicky Drayden’s expertise as a short fiction writer, a format that needs to convey as much character development as possible in a very short number of words.

And here is my conflicted grumble with The Prey of Gods: I simultaneously think The Prey of Gods is great as it is and also needed more. More room to fully develop the world and the story, more room to let the characters connect with one another even more, more, more, more. I feel like there is the seed of an entire series contained in this one novel and well, I wanted more of it, because I truly loved the characters and the beautiful, hopeful connections they made with each other and with their true selves. In a world that is constantly bombarding me with evil and awful news, reading something so queer, so beautiful, so hopeful, so cool—well, do you wonder why I wanted more?