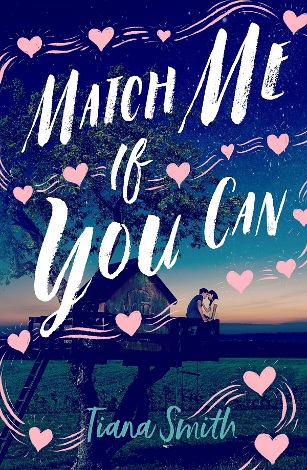 BOOK REPORT for Match Me If You Can by Tiana Smith

I don't reread blurbs before starting a book, trusting instead that Months Ago Me has stocked my TBR pile well. So I was a little confused when I saw this cover, which looks like it belongs to a pensive contemporary romance—like an Emery Lord book. (No shade to that subgenre, but that's just not what I've been in the mood for lately.) Once I realized what the premise was, however, it made perfect sense why it had appealed to me, but the cover threw me way off. At least the treehouse is significant to the story, even if it doesn't come into play until much later on.

With homecoming only two weeks away, overachiever Mia would love nothing more than to go with soccer stud Vince. And it just so happens that Mia's best friend, Robyn, could totally make it happen via her foolproof matchmaking service. Except Robyn refuses to set her up with Vince, insisting that Mia would be a better match with school slacker Logan. (UGH, as if!)

But what Robyn doesn't know won't hurt her, right? So all Mia has to do is secretly pull off matching herself up with Vince and he'll start falling for her! Which of course he will, since they're so obviously perfect for each other.

As an Old reading YA, I try to be very forgiving of teen protagonists making poor choices. They're being impulsive or immature? Well, DUH. And for most of the book, I was willing to cut Mia slack for having a one-track mind in trying to land Vince and being in emphatic denial about her blatant feelings for Logan. (I'm personally too old for that shizz, but godspeed.) But what made me decisively NOPE was how she treats her friends.

Other characters keep saying how Mia cares about her friends and always tries to do the right thing, but the whole inciting incident and very first major action that she takes is betraying her best friend's trust to arrange the match with Vince. That doesn't particularly strike me as caring about your friends and trying to do the right thing. Book, just because you tell me that's part of her personality doesn't make it true.

Mia isn't as close with Elena, but I'd consider them to be at least second-tier best friends. Due to spoiler-y dramz, they become estranged over the course of the novel. At one point, the guy that Mia likes tells her that he's interested in Elena, despite her being loud and crazy.* Mia's only reaction is about the romantic aspect, and not him insulting her friend to her face! Even if I was fighting with my best friend, if someone—anyone—were to diss them in front of me, you better believe that they and I are GOING TO HAVE SOME WORDS. (And this isn't just a hypothetical; I have actually done this in a fit of livid rage back in university. Not my finest moment of controlling my temper, but nobody comes for my best friends in my presence.) Later on, Mia even goes as far as wanting to set Elena's hair on fire. Even as comical hyperbole, that's a horrible thing to wish upon anybody, but especially your friend?! Over a boy?! I CANNOT WITH THIS. (A legit thought I had while reading: "Y'all need some Spice Girls in your lives.")

No, you might not get along with your friends 100% of the time. But if someone truly matters to you, I would hope that you'd ultimately have their back if you consider them to be a best friend. And I don't find that to be true with Mia.

*The language casually and frequently being thrown around ain't great either, but that's another discussion.

In terms of Breakfast Club archetypes, Mia is Claire, Logan is Bender, and Vince is whatever Jock Emilio Estevez's name is. (Andrew? I don't care.) It is extremely telegraphed who's really supposed to be with whom, which is not necessarily bad because YES OF COURSE romances shouldn't come out of nowhere. But having characters spell it out over and over isn't a substitute for actual groundwork. So the book has kissing and whatnot, but the chemistry didn't feel earned for me.

I also had issues with Logan* as a love interest. He just always happens to be there, like he's a flippin' horror movie villain. And SO. MUCH. SMIRKING. (Like, seriously. He once smirked twice in the span of half a page. Has anyone ever seen this kid with relaxed facial muscles?)

Then there's how Mia repeatedly turns Logan down, which does nothing to change his behavior. Even though she does have feelings for him deep down, he doesn't know that. That Lloyd Dobler persistence isn't actually romantic; it's going against someone's wishes to leave them the hell alone. Also, being rejected sucks. So why would you want to date someone who keeps rejecting you anyway? It's always possible that they might change their mind, but you should also respect their choices in the meantime instead of trying to wear them down into submission.

*Has there ever been a non-douchey Logan? Echolls and Huntzberger would say no.

If you've got a craving for '80s teen movies, this book has you covered: nerdy girl worrying about being ostracized for daring to date an out-of-her-league popular jock; disinterested parents; hardass principal; hallway brawl; households that still use landline phones; and an honest-to-goodness food fight. (Which just seems SO wasteful, and also that might have been the only meal of the day for a few of those students. Why would anyone think a food fight is a good idea?!?)

But as the 21 Jump Street films* have demonstrated, that '80s movie mentality doesn't apply anymore. It's cool to be nice now! And nerdy girls have been pairing up with hot jocks since at least Gabriella Montez and Troy Bolton. As much as I also love '80s teen flicks, they're excused for being outdated because they are outdated. A novel published in 2019 doesn't get that same leeway for leaning into the same tropes.

As for the writing, it's pretty easy to breeze through. Some storylines probably could have been tweaked, though. A major subplot wraps up a little past the halfway mark, so it was like 'what else is there left to do?'

And there was no shortage of questionable but definitely memorable metaphors in Mia's first-person narrative. The ones that I won't be forgetting anytime soon are "fruit cocktail of angst", and a description of her and Logan being incompatible polar opposites just like...the wrong sides of a magnet being pushed together. Polar opposites of a magnet attract, not repel. This metaphor is the literal opposite of how a magnet works. I get that Mia's still obtuse to her feelings in this instance, so it's supposed to be tongue-in-cheek that LOL EVEN SHE SAYS THEY SHOULD BE TOGETHER. But it only makes me think how the American education system has failed to teach her about magnets (which is also still a very real possibility, given who's in charge).

This book is also veryyyy bold to not only use the same setting as a pivotal scene in a recent YA juggernaut published well before it, but then mock the setting for being clichéd, too. (Let's just say it's a carnival attraction that shares the name of the sausage king of Chicago.) Obviously, iconic settings don't become off-limits to all other books forevermore. But if you're going to go for it, then The Wire rules apply: you come at the king, you best not miss. And miss it did.

*I'm lowkey kicking myself that I didn't think of this before my friend Tamara made the link, because it's so freaking apt.

I'm so fascinated by everything about Robyn's matchmaking service. How did she discover her talent for it? How does she determine a match? And how has no authority figure tried to intervene with her openly conducting business on school grounds?

Robyn herself is fairly lowkey and intriguing, to the point that I want to ask, "Robyn, what is your life?!" (A question that I'd also pose to both Rihanna and Swedish Robyn. Maybe Robyns are just enigmas?)

Mia dreams of becoming a journalist, which is a valiant ambition in these trying times for the industry. Only problem, though: nobody at this school seems to care about journalism—including those involved with the paper. Circulation is low and funding even lower, but that doesn't excuse why a high school would allow a gossip column about its student body to be in its publication. Which is not a slam on gossip columns at all. (Heck, I regularly read a gossip blog!) But a school-endorsed gossip column seems WILDLY irresponsible! Have we learned nothing from Gossip Girl?!?!

Then there's Mia as a journalist. In trying to find more excuses to hang around Vince, she signs up for the sports beat...and then promptly skips out on the first game she's covering with Logan, the paper's photographer, before the game even starts. (The only photos that Logan took before leaving were from the bleachers and of the crowd, which I know are exactly the type of shots I look for in a sports column.) Mia, Melissa Ludtke did not walk just so you could pass off a puff piece on your crush as a game recap! Not to mention what you did for your final article (slightly spoiler-y): you can't just hijack a newspaper column to write about your personal life! This isn't Never Been Kissed!

I get that you don't have an interest in sports aside from hot jocks. But as a journalist, you might have to write about things that you don't know or don't care very much about. So if you're into journalism, period, you should still take this assignment seriously. You have an opportunity. Embrace your inner B-Rabbit and DO NOT MISS YOUR CHANCE TO BLOW. But instead, you've chosen the path of Rory Gilmore*, patron saint of bad journalism in pop culture.

*A connection that my friend Poppy helped me make. Maybe I would have eventually made it on my own, but she helped me get there much faster.

Relationship Status: Unmatch Me If You Can

Honestly? I was ready to ditch this date before we even cracked open the menu, but I tried to keep an open mind and see it to the end. (How bad could it be? It's only one date, right?) Just when I'd think things might be turning a corner, I'd end up going back to silently digging my fingernails into my palms to pass the time. This book and I seemed like we could have hit it off based on our profiles, but the actual date proved that we're just fundamentally incompatible. THANK U, NEXT.

Match Me If You Can will be available on January 8th.