The X-Files, Doctor Who, and Thor...The Graphic Novels I'm Looking Forward To 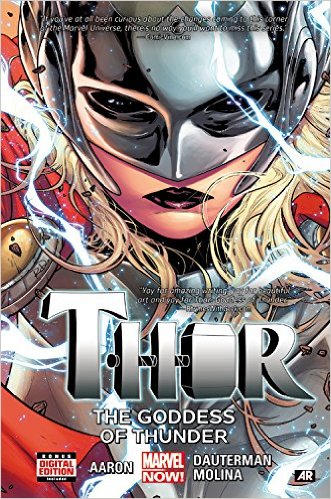 This week, I thought I’d take a look at some of the graphic novels I’m looking forward to in the next few months. I’ve already pre-ordered most of these….

Thor Vol 1: The Goddess of Thunder by Jason Aaron, illustrated by Russell Dauterman and Jorge Molina. The announcement that a major superhero in the Marvel Universe would be changing gender made a huge splash last year, and now the collection of the first 5 episodes of Thor: The Goddess of Thunder is nearly here. I’ve never been a huge fan of Thor, except when the Thunder God was replaced by Beta Ray Bill or Thunderstrike/Eric Masterson. But when the new hero who is found worthy to wield Mjolnir is a woman? I am so there.

Official Description: Mjolnir lies on the moon, unable to be lifted! The secrets of Original Sin have left the God of Thunder unworthy for the first time! But when Frost Giants invade Earth, a new hand will grasp the hammer—and a mysterious woman will take up the mantle of the mighty Thor! Who is this new Goddess of Thunder? Not even Odin knows...but she may be Earth's only hope against the Frost Giants! Get ready for a Thor like you've never seen before, as this all-new heroine takes Midgard by storm! Plus: the Odinson doesn't like that someone else is holding his hammer...and now it's Thor vs. Thor!

Back to the Future: Untold Tales and

Alternate Timelines by Bob Gale, John Barber, and Erik Burnham; illustrated by Dan Schoening, Brent Schoonover, and Marcelo Ferreira. Great Scott! Believe it or not, I saw the original Back to the Future at a drive-in theater. I loved it, as well as the sequels. I also caught the animated series that aired for a bit. But if I can’t have more movies, I’m willing to settle for a graphic novel furthering the adventures of Marty McFly and Doc Brown.

Official Description: Back to the Future creator/screenwriter Bob Gale returns with all-new tales from the twisting and turning timeline that made Back to the Future a, well…TIMELESS pop-culture phenomenon! Take a trip back to 1985 and be there when Doc Brown and Marty McFly first meet, and then jump even farther back, to 1945, to witness Doc’s involvement in the supersecret Manhattan Project. Collects issues #1–5.

Doctor Who: The Eighth Doctor: A Matter of Life and Death by George Mann, illustrated by Emma Vieceli and Hi-Fi. I remember a time when Doctor Who wasn’t on television except for reruns on the local PBS station. This was back in the day when a new, upstart fourth network was getting off the ground—FOX. In the ’90s, FOX took a lot of risks, and one of them was an attempt to reboot Doctor Who with a movie featuring

the regeneration of the Seventh Doctor, portrayed by Sylvester McCoy (one of the most violent deaths the Doctor has ever had), into the Eighth Doctor, portrayed by Paul McGann. McGann’s Doctor had an all-too-brief turn in the TARDIS, as the movie didn’t quite propel Doctor Who back into the minds and hearts of fans. That would come later—thank you, Mr. Davies. But, you can’t keep a good TimeLord down, and in this series from Titan Books, the Eighth Doctor finally gets an adventure, and I can’t wait to read it.

Black Magick Volume 1: Awakening by Greg Rucka and illustrated by Nicola Scott. I’m a sucker for a good urban fantasy, and based on what I’ve seen about the comics, this book from Image delivers. It’s actually categorized as occult/suspense/crime, but either way, it sounds amazing. I’m very excited

to check it out.

Official Description: Collecting the first five issues of the critically-acclaimed new series from creators Greg Rucka (Lazarus, Star Wars: Shattered Empire) and Nicola Scott (Secret Six, Earth-2). Rowan Black is a detective with the Portsmouth PD…and a witch, two aspects of her life she has struggled to keep separate. Now someone is targeting Rowan, someone who knows her secrets and means to expose her...or worse.

X-Files: Complete Season 10 Volume 1 by Joe Harris, illustrated by Carlos Valenzuela, Michael Walsh, and Matthew Dow Smith. I’m going to let you in on a poorly kept secret: I read a lot of the X-Files tie-in novels. I just loved the characters and the world, and when the show was over, I really didn’t want it to end. So, I read books. Like Antibodies, Ruins, and Goblins, to name a few. The trend of continuing a television show past cancellation in the comics is, in my humble opinion, fantastic. Buffy and Angel have done it quite well. Also Firefly and Dollhouse (I know it seems li

ke a Whedon thing), Xena, and Battlestar Galactica (the old version, not the reboot), to name a few. With the recent revival of The X-Files on television, this is a particularly great time to revisit what made the show great, so I’m really looking forward to this one.