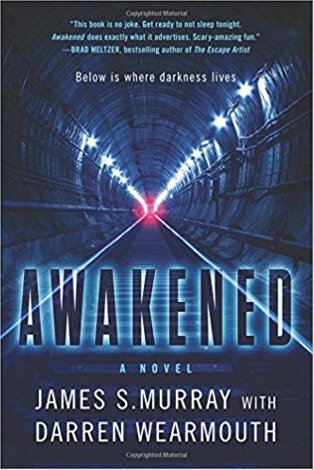 There’s something inherently creepy about subways.

I say this as a New Yorker (at least, I’ve lived in New York for the past eight years and have had to ride the subway everyday so I feel entitled to make this observation).  Forget the rats that dart across the subway tracks visible from the train platform, beneath the city streets entire unseen worlds exist. Depending on your imagination and inclinations, these worlds could be more whimsical a la Neil Gaiman’s Neverwhere, as tongue-in-cheek awesome as the Teenage Mutant Ninja Turtles, or something more along the lines of the horrific rat man of Creep or the serial killer on the Midnight Meat Train. I usually tend towards the latter--that's why Awakened was so appealing.

In a heroic effort from the MTA and New York City Mayor, Tom Cafferty, the Z train has just been extended to reach far beneath the Hudson, connecting Jersey City to New York City and establishing another major subterranean line and transportation-commerce hub (think: a sparkling brand new Penn Station halfway between Manhattan and Jersey). It is Mayor Tom Cafferty’s life’s work — pretty much costing him his marriage — but he stands proud, surrounded by press and the President of the United States, eagerly awaiting the inaugural Z train’s arrival to christen the line’s opening. But the train is a few minutes late… and then when it finally shows up, it is empty of passengers, and covered in blood.

Panic ensues. The President is whisked away into the central command fortress by his secret service agents, leaving everyone else trapped outside with whoever is responsible for the Attack. Everyone’s first thought is terrorism, of course, but when methane levels start to rise within the tunnels, that hypothesis is questioned.

Then comes the dark. And the real monsters.

Awakened is a taughtly written, brilliantly unexpected thriller from authorial duo James S. Murray and Darren Wearmouth. I already knew that the story would feature supernatural monsters as villains, but had modest, basic expectations: i.e. everyone thinks it's terrorists but then a four-armed lizard demon crawls out of the dank tunnel to Jersey and starts ripping people apart in a gleeful, bloody melee. That alone would have been 100% satisfaction.

But then, it gets better.

This isn’t just a story about a single monster attack. It’s not even, really, a story about how humans react to stress in small spaces, bringing out the best and ugliest in human nature. Certainly there’s a lot of that — we see the best of humanity in the form of Mayor Cafferty and MTA worker Diego Muñoz, our primary heroes (despite their flaws and backgrounds), rising to the occasion, while others like the President and his entourage are your typical selfish throw-everyone-to-the-monsters jerkfaces. From a writing perspective, Awakened is competent and methodical, building tension as the stakes continue to rise miles below the city, and while there isn’t much in the line of introspective development or nuance, it doesn’t really matter because the story is just so engaging.

Awakened hits the high notes of Douglas Preston & Lincoln Child’s Relic and Scott Snyder’s The Wake — two of my personal favorites in the monster-locked-room thriller category — but its scope actually extends much further. There are shadowy organizations, and deep-seeded conspiracies, and double-crosses, and infestations of demonic, whip-smart monsters.

Oh, and there's room for two more novels in the trilogy. I cannot wait.