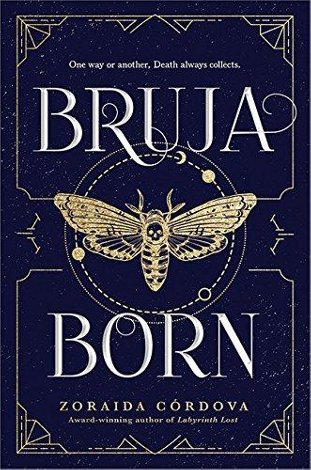 This is not a love story.

Lula Mortiz, heartbroken and almost dead, casts a spell to save the life of her beloved — and then has to deal with the consequences of her actions when the Lady de la Muerte herself gets involved.

But I am ahead of myself: Bruja Born is the outstanding sequel to Labyrinth Lost, which I had the pleasure to read and review last year for this column. Bruja Born takes place a few months after the events of the first book, following the Mortiz sisters in the aftermath of what happened in Los Lagos. Alex – the protagonist of Labyrinth Lost — is now an all-powerful Encantrix whose newfound powers are at once a source of great pride as well as a source of great hurt to those around her. Her sister Lula — the eldest Mortiz sister and a bruja with healing powers — is the main character here, someone still grappling with the emotional and physical wounds she suffered in Los Lagos.

Her sources of comfort are her family and her boyfriend, Maks. But Maks breaks up with her and then a bus crash happens — her classmates are all dead and Maks hangs by a thread. Using her powers and with the help of her sisters, Lula casts a Death-defying spell to bring Maks back. But that doesn’t go down well with Death personified when things get out of balance between the worlds of the living and the dead. In other words: it’s chaos.

What follows next is an Urban Fantasy YA novel that expands the world we first saw in Labyrinth Lost exponentially. We find out not only more about brujas, but also about other fantastical creatures and how their power connect or clash. While the politics of the worldbuilding are developed and we learn there is so much more to the world than we expected, the novel’s focus remains largely on the Mortiz sisters — their relationship, on the love and loyalty they have for each other — a love that knows no bounds. And this sometimes can become a problem: when you go so far for love, what are the consequences?

Just like in its predecessor, Bruja Born starts with a mistake, a mistake that has real, dark consequences: the death toll in this book is surreal and I for one, appreciated that the story went as far as it could in how it handled someone who literally faces-off with the personification of Death. There are no punches pulled, or stone left unturned.

By mixing all that with some of my literary catnips which include a Lady Death personified, sisters and family, Bruja Born catapulted itself to one of my favourite reads of the year so far. Now I can’t wait to read about Rose, the last Mortiz sister with her kick-ass power — and to find out what is up with their dad.