If You Could Read a Book a Day, These are the 31 Science Fiction & Fantasy Books You Should Read for July 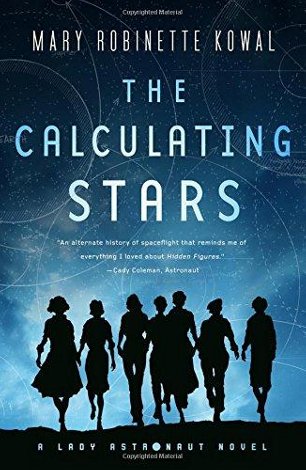 I am constantly in awe at the vast number of books that are published every month. July alone sees the publication of several hundred speculative fiction titles vying for your reading time. It can thus be a daunting task for readers to find their way to the best of them. That's where I come in. Every month, I sift through the vast number of speculative titles and pick out the ones that deserve your attention.

Here is the roundup for July. But be warned! I found so many worthwhile science fiction and fantasy books that you could literally read a brand new one every day of the month.

If you lean towards science fiction set in space, know that several space-based stories are available for you to devour. For starters, check out Mary Robinette Kowal's science fiction debut The Calculating Stars. It depicts an alternate history in which a 1950s meteor strike accelerates the need to develop the space program. Elma York is working in the background to put a man on the moon but sees no reason why she cannot be the first lady astronaut. There's also Prime Meridian by Silvia Moreno-Garcia, which shifts the focus to Mars. That's the ultimate travel destination for the story's main character. Amelia feels trapped by life in Mexico City, pulling in money as a rent-a-friend and by selling her blood to old folks hoping to rejuvenate themselves. Yet even her daily drudgery cannot block her from the alluring pull of the Red Planet. Meanwhile, in Emily Skrutskie's intriguing Hullmetal Girls, the path to a better life (or at least the money to buy one) may be volunteering to become a mechanically-enhanced soldier called a Scela. That's what Aisha Un-Haad decides to do to raise the money she needs for her brother's medical treatment. In the Fleet is where Aisha meets Key Tanaka, a Scela with only fuzzy memories of her former, well-to-do, pre-Scela life. Both women from disparate backgrounds must work together if they are to challenge the pending rebellion. Then there's Annex by Rich Larson, in which powerful invaders have taken away the adults. That leaves the young survivors to fend from themselves and they're ready to fight back. Here's another: Planetside by Michael Mammay, about a war hero named Colonel Carl Butler who is called out of semi-retirement, sent to a space station orbiting a battle-ravaged planet in the far reaches of space, and tasked with finding the missing son of a prominent councilor. His investigation leads to dead ends, intrigue, alien encounters and a trip down to the hostile planet. Also set in space, but reading at times like fantasy, is Empire of Silence by Christopher Ruocchio. Here, Hadrian Marlowe flees his father and a future as a torturer only to tread down a path that will lead him to becoming the man who saved a planet by killing billions.

Claire O'Dell's futuristic mystery A Study in Honor is not set in space but is no less thrilling. It's a gender-flipped re-imagining of Sir Arthur Conan Doyle's famous detective Sherlock Holmes. In near future Washington, D.C., Dr. Janet Watson, recently and honorably discharged from the Civil War, teams up with covert agent Sara Holmes to find a murderer targeting veterans. Meanwhile, in the dark future of Jay Schiffman's Game of the Gods, military commander Max Cone has had enough of war and politics and wants to leave it all behind. But when war breaks out, he becomes the leader every nation wants. One nation gives him a device that predicts the future; specifically, that Max will be responsible for the end of the world. To save his family and friends (not to mention the world), he leads a ragtag team of warriors to set things right.

On the fantasy side of the reading spectrum, seek out Spinning Silver by Naomi Novik. In this imaginative retelling of the Rumpelstiltskin fairy tale, Miryem sets out to collect the debts owed her family of moneylenders and along the way gains a reputation for figuratively turning silver into gold. This catches the attention of the king of the fey creatures, who demands that she literally turns silver into gold or risk being frozen solid. There's also Micah Yongo's Lost Gods, a dark fantasy in which a young assassin named Neythan finds himself hunted by his assassin brothers and sisters when he is framed for the murder of his closest friend. Neythan's journey will lead to him learning the true nature of his revered assassin brotherhood. The Book of Hidden Things by Francesco Dimitri, meanwhile, is a magic realism fantasy in which four old friends make a pact to meet once a year in the small Italian town they grew up in. This year, when one of them is a no-show, the others' search to find him leads to their discovering a mysterious book that promises to reveal dark secrets.

For fantasy adventure, take you pick! European Travel for the Monstrous Gentlewoman by Theodora Goss continues the adventures of the daughters of literature's mad scientists. This time around, Mary Jekyll and the other members of the so-called Athena Club must rescue Lucinda Van Helsing, who has been kidnapped and subjected to horrific experimentation. Speaking of adventure, allow me to introduce you to Constance Verity, adventurer extraordinaire, and her latest outing Constance Verity Saves the World by A. Lee Martinez. All Constance ever really wanted was to leave adventure behind, but just like Michel Corleone and the Mafia, they keep pulling her back in. Gail Carriger's tongue-in-cheek Competence is a Victorian England-inspired steampunk urban fantasy adventure in which rumors of a new kind of vampire attract the attention of the book's proper protagonist, Miss Primrose Tunstell. It also leads to encounters with pirates, a lovesick werecat and a scheme to steal helium to save her airship.

I said it before and I'll say it again: Short fiction rocks. July is stuffed so full of short fiction, you won't know where to start. I do. Start here: with The Year's Best Science Fiction: Thirty-Fifth Annual Collection edited by Gardner Dozois. This is the longest-running anthology series that, sadly, has come to an end with the recent passing of its esteemed editor. (We miss you, Gardner!) The reason this series has been running so long is Gardner's keen eye for science fiction stories that not only entertain and provoke thought, but also span the genre spectrum and remind you why you love reading in the first place. Another roundup of last year's best is Rich Horton's The Year's Best Science Fiction & Fantasy 2018 Edition. This one contains both science fiction and fantasy and like any anthology, is sure to lead you to new authors. If you're still looking for more short fiction (and you should be), check out Infinity's End edited by Jonatan Strahan, From the Depths: and Other Strange Tales of the Sea edited by Mike Ashley, The Final Frontier: Stories of Exploring Space, Colonizing the Universe, and First Contact edited by Neil Clarke, Steampunk International edited by Ian Whates, and 2001: An Odyssey in Words: Honouring the Centenary of Sir Arthur C. Clarke's Birth edited by Ian Whates & Tom Hunter.

Short fiction collections—that is, collections of stories written by the same author—includes Apocalypse Nyx by Kameron Hurley, The Promise of Space and Other Stories by James Patrick Kelly, Terror Is Our Business: Dana Roberts' Casebook of Horrors by Joe R. Lansdale & Kasey Lansdale, The Ghost Stories of M.R. James edited by Roger Luckhurst, and The Future Is Blue by Catherynne M. Valente. Pick up any one of these and see how imaginative writers can be.

There are small handful of short novels available individually, too. These include the Binti trilogy by Nnedi Okorafor (now published in hardcover editions—look for Binti, Binti: Home and Binti: The Night Masquerade), Unlocked: An Oral History of Haden's Syndrome by John Scalzi (prequel to the novels Lock In and Head On), and The Descent of Monsters by JY Yang. These are all perfect one-sitting reads for anyone who wants to be wowed by science fiction and fantasy.