Jude the Obscure, a Novel That's Anything But:

The novel that birthed a "machine of condemnation" 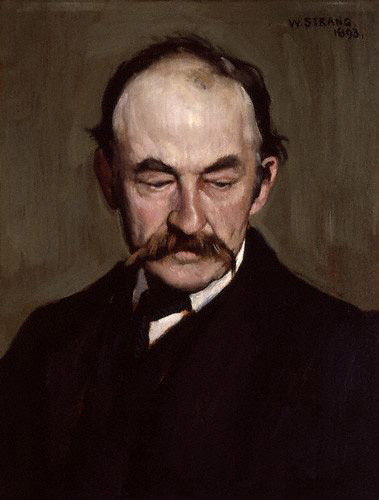 Thomas Hardy always imagined that he would be better known for his poems than his novels, which he grudgingly wrote, he said, simply to pay the bills. The facts were otherwise. He lived a long life, dying in 1928 at the age of 87, but had given up on writing those novels fully 33 years before—which did nothing to diminish either his reputation or the speculations on the parts of the contemporary press as to just when he would break the long silence and turn once again to fiction.

Hardy had reason to be unhappy with the media of his day, for when his last novel, Jude the Obscure, was published in 1895, a whole machine of condemnation went into motion. Hardy had committed two sins: he had depicted the physical interests of men and women without embarrassment or apology—and even though the Victorian era was far less prudish than is popularly imagined, there was such a thing as pushing realism too far, mild though the result seems to us readers 120 years later. F

or another, he had dared depict people who were unhappy enough in marri age to do something about it.

The idea that premarital and extramarital hanky-panky, bigamy, and divorce might be taking place out in the provinces stirred editorialists to action, with some calling Jude smut, others merely a potboiler. Even Hardy’s friend and fellow novelist Edmund Gosse was moved to wonder about Hardy’s gritty depiction of rural life: “What has Providence done to Mr. Hardy,” Gosse asked, “that he should rise up in the arable land of Wessex and shake his fist at his creator?”

Therein lay another rub, for class and religion also figure into Hardy’s scheme. Jude Fawley just happens to have been born without title or spare change. That doesn’t keep the quiet, studious boy from longing to learn Greek, Latin, and Hebrew with an eye to a ministry out in the countryside. “Once there I shall so advance, with the assistance I shall there get, that my present knowledge will appear to me but as childish ignorance,” says Jude of his plan to storm the citadel of some university or another after scraping up the tuition. “I must save money, and I will; and one of those colleges shall open its doors to me—shall welcome whom now it would spurn, if I wait twenty years for the welcome.”

Improbably, and not without opposition, Jude works his way into a university very much like Oxford. It’s not long afterward, though, that he is trapped into marriage by a woman who hasn’t really reckoned on the odds of theology leading to wealth. Saints, of course, aren’t supposed to be seducible. Jude loves another, Arabella loves herself, Sue loves—well, that’s the meat of the story, the stuff that got critics so upset back in the day, not just because saintly Jude and the ladies messed around, but because they dared act as if they were the masters of their own bodies and even of their own fates. It was a shocking, scandalous thought, and once the dust had settled, Hardy abandoned writing the novels that brought him renown.