Love, Hate and Other Filters by Samira Ahmed 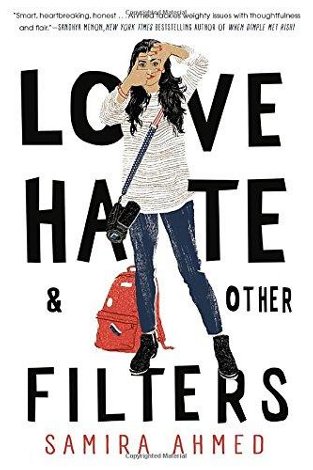 BOOK REPORT for Love, Hate and Other Filters by Samira Ahmed

Cover Story: Get Ready For Your Close Up

Cover Story: Get Ready For Your Close Up

This cover is really eye-catching in a simplistic, bold way. I love the cartoon Maya! It doesn’t make the title the easiest to read, but I doubt the designer assumes you’re looking anywhere other than the figure in the middle.

Here is what concerns Maya Aziz right now: working up the courage to tell her parents that she wants to go to NYU to study film; whether or not a little rumor going around about Phil and his girlfriend breaking up is actually true; how to avoid becoming engaged to a desi boy her parents approve of before she’s graduated high school.

In short, Maya is a regular American girl, living in the type of small, Midwestern town where you’ve actually met your mayor, who just also happens to have Indian immigrant parents who have raised her in a Muslim household. When an attack happens at a government building not far from where she lives and the suspected bomber shares her last name, Maya suddenly finds out how much some people can really suck.

If I became a friend of Maya’s I’d have to be comfortable with being on camera, and I’ve seen myself—I’m pretty awkward. Luckily she’s surrounded by natural, outgoing people to pick up the slack I will surely provide. Maya’s journey is about how to be brave and honest about what she wants—and shout out to her awesome friend, Violet, who pushed her and supported her in this in equal measures.

Maya often uses her camera as a social crutch when she feels like she’s in the hot seat, and I got her urge to do so, though I wanted (from my adult perspective) to reach out and push the camera down once and a while; because, Maya, when things are getting a little heavy, that usually means they’re pretty important moments you’ll want to experience in full 3D (and I don’t mean the type where you have to wear uncomfortable glasses).

Maya meets Kareem, an appropriate Indian boy who is actually kind of awesome, at a relative’s wedding. He enjoys making her blush, he’s got killer eyes, and knows exactly what to say to her parents to make them swoon over him. But then there’s Phil, her crush for what feels like forever—the football star, the guy who makes everyone feel special even when he’s just making small talk, the one who suddenly seems to get Maya more than anyone else. Maya had some great, intense-eye-contact-y moments with a certain fella that had me lightly fanning myself.

Samira Ahmed grew up never seeing herself in books, and this was her opportunity to change that for future teenagers who may look or feel or think like her. One day maybe this will be so commonplace that it won’t need to be pointed out as something special, as there will be representation for all types—because this was just a book! A relatable, thoughtful contemporary story about a high school girl who’s just trying to figure out her place in the world, and happens to be Muslim, too. I’ve seen some comments on the fact that Maya doesn’t focus on her religion much at all in the book, and that is true, but like with any religion, you’ll have those who are very devout and those who kinda just grew up in it, following it mainly because their parents want them to. Basically, it felt like a realistic situation many teens probably find themselves in (I know I did).

Ahmed also has a pretty light touch; despite some heavy topics, this was a breeze to read and I devoured most of it in a day. Is it going to set the teen-book world on fire like The Hate U Give? No; it’s definitely not as complex as that, but, you know what? That’s okay. I don’t think anyone is asking a Kasie West book to start world peace, and nor should they. Sometimes you just want a light but meaningful contemporary read.

The beautifully colored outfits, the food, the dancing. What’s not to enjoy? (Well, except for the family matchmaking.)

Maya has a complicated relationship with her parents, who are traditional and wish she would be a good, obedient daughter who never stepped out of line. What parent doesn’t want that, amirite? And while they aren’t, like, monsters or anything, Maya’s aunt Hina is the perfect “cool Aunt” that every teenager deserves for when they just need to vent or need a safe place to crash after a romantic fondue date with an older guy.

While I was pleasantly (and sadly? I guess I was just expecting this to be a very scary cautionary tale) surprised by how cool most of Maya’s neighbors were, this isn’t a story without its share of conflict and hate. As a hopefully decent person myself, I just do not understand how someone can look into the face of another human and say such hurtful things.

I’ve seen you around class, Book, and I like how you speak your mind. College is about opening yourself up to new experiences, so if you asked me out for coffee, I’d be totally into learning more about you.

Love, Hate and Other Filters is available January 16.