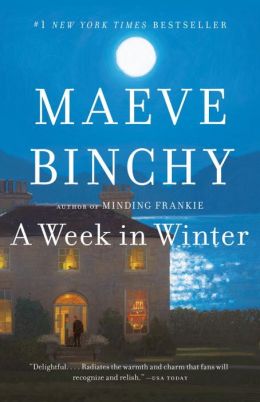 Whether you’re actually Irish or not, right about now is a perfect time to read an Irish romance or two, and there are some great ones out there.

story collections that were also, in many ways, about Ireland. Her career spanned 30 years: her first book, Light A Penny Candle, was published in 1982 and her final novel, A Week in Winter, was published posthumously in 2012. Most romance readers will likely have read a Binchy or two, but if you haven’t, be warned: Not every romance ends with a happily-ever-after in her stories.

Nora Roberts is The Queen of Romance, especially romantic suspense, but some people feel that her best-ever books are her Irish romances, even better if they’re alos paranormals. (Well, and—ahem—there is also Roarke. Who is Irish. Even if that is technically JD Robb....) Two great trilogy picks to celebrate Ireland this month are The Gallaghers of Ardmore (Jewels of the Sun, Tears of the Moon and Heart of the Sea) and the recently concluded Cousins O’Dwyer series (Dark Witch, Shadow Spell and Blood Magick). You basically can’t go wrong with Nora, especially when she transports us to Ireland.

If you’re looking for a few good Irish historicals, check out the MacEgan Brothers series by Michelle Willingham. You’ll find a few slaves, a number of Vikings and lots of warriors, with a bit of taming and surrendering going on. Oh, and pleasuring. There’s a lot of pleasuring, even though it’s only mentioned in one title. ;o)

s was a sexy, touching Golden Age romance I’d recommend) and I am very intrigued by her title Conor’s Way, which won a Rita. The hero is an injured prize fighter who fled Ireland after losing everything during the potato famine, and is now enlisted to help the spinster heroine, who’s raising three adopted daughters while trying to save her plantation home from a carpetbagger after the Civil War. Doesn’t that sound great?!

Finally, Tessa Bailey is an author I’ve been hearing great things about, and her 2014 title Unfixable takes place in Dublin. When American heroine Willa wins a trip to Ireland, the timing is perfect, since she needs some time and distance to find herself after a messy, painful breakup. She winds up in the Claymore Inn, the family business Formula One racer Shane Claymore wants to be rid of so he can get back to the circuit. Despite a shaky start, the two angry, wounded young people connect, but neither is looking for love, and may let a chance at happiness slip by when pride and fear get in the way. (The title is YA and seems to include the angst and tug-of-war emotions that the genre is famous for. I haven’t decided if I’m a fan of that or not, but Bailey has been so highly rec’ed that I’m willing to give her a try. Shane sounds Irish sexy and the romance volatile, so it might win me over just for that.)

What about you? Any Irish-themed books you love, or authors you’d recommend? Please share!

And, as the snow melts in Wisconsin, may the sun truly be warm upon your face this St. Patrick’s Day.