These Violent Delights by Victoria Namkung 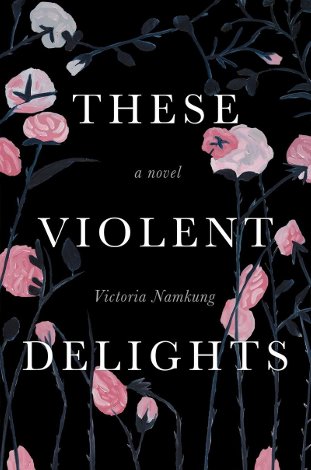 BOOK REPORT for These Violent Delights by Victoria Namkung

Cover Story: A Rose By Any Other Name

Trigger Warning: This book contains depictions of suicide and descriptions of sexual abuse of teenaged minors. Please tread carefully if you are sensitive on these topics.

Cover Story: A Rose By Any Other Name

I love this. The dark background gives the garden of roses a sinister vibe. The English teacher in question called all of his victims “a rare rose” so this cover is both pretty and accurate.

At Windemere School for Girls, there’s a predator hidden in plain sight. He has great ratings on RateMyTeacher.com, the faculty adores him, and half the girls at school have a crush on him.

Caryn Rodgers is long done with Windemere, but her internship at the Los Angeles Daily—right within spitting distance of her idol, Jane March, investigative reporter—combined with lots of therapy both have given her the courage to talk about what happened to her. She sends Jane a personal essay detailing how her English teacher claimed he fell in love with her and how the entire experience has colored her life, and Jane persuades the paper to publish it.

Immediately Caryn is thrown into the spotlight, finding support and vitriol in equal measure. When others start to come forward, Windemere realizes this is one scandal they may not be able to sweep under the rug. Caryn didn’t set out to create what the internet is calling a “witch-hunt” but as even more sinister details emerge, she realizes what she’s actually longing for is Justice with a capital J.

Caryn could use another friend, but I don’t know if she’d let me, since she pushes away even her BFF and roommate, Grace, when things get tough. Between her domineering and absentee father and her critical Korean mom (she trusts that some of you will know what that means), girl is a MESS. I was so glad to hear she was in therapy. She could use a big giant hug too, and I have been told I have a good shoulder to lay your head on.

Jane is a no-nonsense reporter who basically lives at her desk. She’s an admirable lady, but we’d never have a chance to hang out because at the beginning of the story she would never meet me for drinks on a work night (and that’s every night). Through her interactions with Caryn and the other Roses, plus her tête-à-têtes with an ex-coworker, she does soften up, but, really, she could use a hug too for reasons that will eventually become clear.

A man in his mid-thirties preying on fifteen-year-olds, telling them he blushes whenever they come around because they’re so beautiful he can’t control himself, promising to leave his wife and children and run away with them? Meeting them at a McDonald’s to drive them to a secluded make-out spot so he can “teach” them about their sexuality? Pretty much the definition of swoonUNworthy. This guy is a slimeball extraordinaire and the fact that he can flip to serial-killer cold in a heartbeat when things don’t go his way is that much more chilling.

This book feels quite topical amidst all of the allegations of sexual abuse coming out of Hollywood right now. The women in this book are bravely stepping forward after Caryn’s essay without any real proof besides their own words and it’s both terrifying and empowering. The chapters alternate between Caryn, Jane, and two other Roses: Eva, a mother of twins who never told a soul about her relationship with Copeland, and Sasha, an emotionally volatile woman whose traumatic experiences in high school colored every part of her adult life. Their chapters served to relay their Copeland stories but they never felt like equal protagonists.

Victoria Namkung is also a journalist by trade and that shows in her writing. Her style felt very “to the point”; the word choices ground you in reality and never give way to any flights of fancy, and the usage is economical, as it often needs to be in print journalism. There is a point where Caryn says she could never handle watching the movie, Spotlight, which follows the journalists who broke the story about sexual abuse within the Catholic church, because it was a trigger for her, but this story definitely evokes that movie’s vibe.

One quibble I had was with the way certain dialogue was written. Many characters give very long and perfectly constructed speeches where they school other characters on their lousy actions or about one of the topics being discussed: safety of young women, sexual abuse, predators, victim-shaming, believing women. They are great sentiments and powerful words, but the realism of the story takes a backseat when this happens. I won’t deny that some people just have a way with speaking, but, while reading, sometimes it felt obvious that the writer wanted to convey this or that point, rather than the ideas flowing organically from the way most people actually talk.

Despite the dark parts, much of the focus is placed on the women who spoke out and the comfort they find in knowing they weren’t alone, talking through their experiences together and with family, and starting the healing process for old wounds.

It wouldn’t be a modern day discussion without the trolls crawling out of their hidey-holes to spout their hateful, unwanted opinions on the internet. Namkung doesn’t hold back in describing the kinds of comments people leave about Caryn, Jane, and, especially, Copeland. Again, this feels extremely realistic and topical considering some of the sentiments said about the woman coming forward about Harvey Weinstein and people like Donna Karan making idiotic statements about woman “asking for it” with their sartorial choices. Just when you think, “Surely no one can support this asshole,” you find there are plenty who do.

SO many adults let these young women down and allowed Copeland to get away with what he does for as long as he did. The school administrators who don’t want to derail their gravy train; the parents who don’t care enough about their daughters to defend them to the bitter end. It will make your blood boil.

There’s nothing romantic between us, Book, your topics are too serious for that, but I simply want to tell you that I support you and your message, and I want you to know that I believe you.

These Violent Delights is available now.