It's Where My Demons Hide 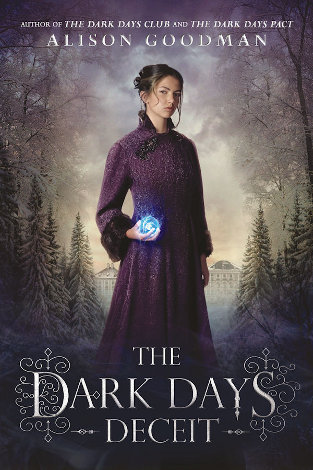 Warning! Some spoilers from the first two books ahead, so proceed with caution if you are not caught up!

I do covet that coat. So flattering. There’s nothing glaringly wrong about this cover; I just wish it wasn’t a real model staring at us. Everything else is pertinent to the story, but the inclusion of the lifelike girl just screams, “I’m a YA book! Look how relevant I am to your teenage sensibilities!”

It’s been five months since Lady Helen and Lord Carlston bonded through the Ligatus to become the dyad known as the Grand Reclaimer, and now Helen is only three weeks away from her wedding to the Duke of Selburn. She and Carlston have been training and searching for months, but they are no closer to figuring out who the Grand Deceivers are than before, and Helen is beginning to feel pressure from all sides about her future with the Dark Days Club after she becomes a Duchess. Can she continue to be a Reclaimer when she is expected to be a mother? Does she even want to?

Looming above all of this is the Ligatus, that dark, violent creation written in the blood of murdered innocents that now resides in Helen’s head—and is looking for a way out and doesn’t particularly care about her survival. The bond between her; her lady’s maid and Terrene, Darby; and Carlston is a tangible thing that beats in their chests, but it weakens them all if Helen can’t get the Ligatus’ power under her control.

Somewhere hidden in the city of Bath are the answers she needs, but it’s going to take all of her willpower to avoid being killed by Deceivers and avoid being cut to the bone by Regency high society gossip if she wants to save the world.

I still adore Lady Helen, but there were many times during this book I wanted to grip her by the shoulders and give her a good, stern shaking. Helen, love, the world is not black and white, and while you are only as good as your word, you cannot shortchange your own desires to please everyone else. I thought she was on the verge of that breakthrough before, but the backsliding in this book was most frustrating. She would get upset with those who sought to force their will on her, but would forgive them too easily and bow to their demands. And while I appreciate Goodman’s attempt to balance a historically accurate viewpoint with modern feminist views, Helen’s inner thoughts didn’t seem to reflect the person she had been turning into over the last thousand pages, and I missed my friend who stood up to her controlling jackass of an uncle.

The end of The Dark Days Pact left both Helen and Carlston raw when they learned Lady Elise, Carlston’s wife, was actually a French spy who disappeared of her own accord, and that meant he was still even more married than when she was presumed dead. Helen was also forced into an engagement with Selburn after being caught on the road with him alone, and he was as pleased as punch at getting his way. I expected more tortured looks and stolen moments between the star-crossed lovers, but I was let down; everyone was conspiring to keep Carlston away from Helen and they seemed to succeed more often than not.

Helen, as I mentioned, is honorable to a fault and spent way too much time convincing herself that a marriage with Selburn would be a decent substitute to actually being with the man who makes her blood sizzle. The Duke’s petulant refusal to understand that Carlston and Helen HAD to work together to, ya know, SAVE THE DAMN WORLD and his constant assertions that Helen would obviously retire once they were married because she’d be busy popping out stupid Duke babies (despite the fact that he was clearly told multiple times about her oath to God and country to be a Reclaimer) made me want to change this section to the Punchworthy Scale. He’d be a 10 fer sure.

All hope was not lost, but I missed that prior sexual tension dearly.

It’s killing me a bit that I can’t gush with impunity about the conclusion to this wonderful series. I closed the book and was riding a bit of a high just because it was done, but as I sat to think through what I’d just read more thoughtfully, I did find I had some concerns (some of which I voiced above). One of my major pet peeves is repetitiveness; when the author feels the need to endlessly rehash the major goal or plot for the story it feels like they don’t trust their readers to remember basic facts and follow logical leaps, and also makes me wonder if they are padding their word count à la a panicking college student with a looming deadline.

I also struggled with the balance between the strict Regency rules and regulations and plot pacing. Helen has always been relatively concerned with keeping her place in high society, and I appreciate the historical accuracy and exploration of what it means to be a woman in such a judgmental world. There were some points, though, especially as more information was revealed to our main characters about exactly what the Grand Deceivers meant to do, that I wished they’d put a little less focus on propriety and more on keeping everyone alive.

While this wasn’t a perfect book, I still did very much enjoy it and found it difficult to put down. I would encourage fans of the book to finish the series—it’s not the worst conclusion to a trilogy I’ve read, it’s just, unfortunately, not the best. The second book was by far the strongest, but overall it’s still an original, well-researched, and delightful historical fantasy series. I look forward to seeing what Goodman comes up with next.

Selburn’s ancestral seat of Chenwith was inspired by Castle Howard, which, drool. Goodman’s attention to detail had me recreating beautiful rooms in my mind’s eye, and it all sounded so lovely.

The town of Bath is a character in its own right. Goodman has taken us on a sensuous tour of England in this series, and it’s making me wish I had more time to explore the English countryside during my trip to the island next March (there’s just too much to do in London and so little time to do it!).

Not everyone is going to make it out alive, which raises the stakes but also makes me bummed.

Nothing is perfect, Book, and we hit some snags on our way to success, but even a somewhat rocky ending couldn’t diminish my overall happiness about the time we spent together. We’ve got a deep connection that may be alchemical in origin, but it doesn’t make my feelings any less real.