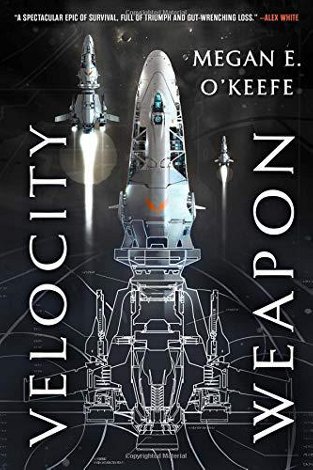 Sanda is a Prime soldier who awakens one day alone, naked, missing one leg and most importantly, inside an empty enemy space ship whose AI calls himself Bero. Bero tells her in no uncertain terms that she also happens to be missing two hundred and thirty years. Her gunship was blown up, her evac pod was captured by the Icarion ship, and she has been sleeping all this time.

Worse even: there is nothing out there. Her home world, Ada Prima, doesn’t exist anymore, nor does its rival, Icarion—they have utterly and surely annihilated each other. Now, Sanda and Bero travel the universe in search of any sign of life. And then they find another escape pod with a sleeping dude who needs to be awaken and told the truth.

Cue 230 years before that and Biran is about to graduate Keeper academy when the unthinkable happens: a strike from their enemies, who destroyed his beloved sister, Sanda’s, gunship. No one wants to believe she and the other soldiers are still alive, but Biran does. And he will do anything to get his sister back.

Starting with one of the coolest, most gripping opening acts I’ve read of late, nothing is what is seems in this fantastic space opera by Megan E. O'Keefe. With a fast-paced narrative that goes back and forth in time and place, and lots of twists and betrayals, Velocity Weapon also manages to be a thoughtful examination of the nature of power, of war, diplomacy, politics, and, as the story progresses, of the rights of Artificially Intelligent beings. The relationship between Beru and Sanda is an important one in the book and one that becomes central to the development of the story. Despite their different “upbringing”, Beru and Sanda experience the worst of humanity and have been betrayed and used against their will. There is a lot here about making choices, about choosing who to trust and forming alliances.

Velocity Weapon also features at its core a loving, close family: not only the relationship and love between Biran and Sanda but also between the two of them and their dads. It’s a healthy, loving sibling relationship that motivates these characters. Even the characterisation of each sibling strikes a chord: the more serious Biran to the snarky, funny Sanda. They are also super competent in their chosen vocations.

There is a mysterious third viewpoint narrator, a woman on the run who is searching for answers, and her story intersects with that of Sanda, Beru and Biran in an interesting way toward the ending of the novel. In the meantime, there are weapons of mass destruction, a plot centuries in the making, an AI gone rogue for Sanda to contend with, AND a spy who may or may not be falling in love with her in the cutest way. Given all that’s at stake here, it is so nice to also have a secondary romantic plot that features an adorably awkward sex scene.

Velocity Weapon is the first in The Protectorate series and I cannot wait for the next installment (especially after THAT ending).