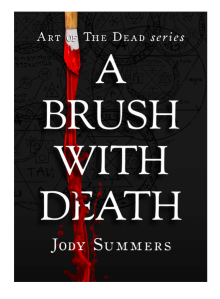 It’s a shame that Nike claimed the “Just Do It” slogan. That would be the ideal catchphrase for Austin resident Jody Summers. Prior to writing his debut novel, A Brush With Death, the launch of a series of psychological thrillers, Summers engaged in an eclectic array of pursuits: He was a runner-up in gymnastics for the National Junior Olympics from Texas, a restaurateur, a tanning salon operator, a martial artist, and a stuntman.

But then he met a fascinating woman, a retired model and artist, who creates “tribute” paintings that incorporate a deceased person’s ashes into the paint. When he told a friend about this macabre business, she suggested to him it would make a great novel. Boom: Six months later, he had written A Brush With Death.

“I’ve read a lot of books,” he says. “You’ll never catch me without carrying at least one novel. I’ve written poetry since I was a little kid. But I never thought of writing a novel.” He “flat-out gasped” when a friend suggested he do so, but he sat down that night and started writing.

Kirkus praises A Brush With Death for its “enjoyably ominous mood,” calling it a “tense and satisfying thriller that does justice to its weird premise.” Summers’ protagonist, Kira, a nightmare-plagued New Orleans artist, has launched a new company, Canvas for Life. But her ashes-embedded paintings reveal an extrasensory perception. “When I paint,” she explains to a new client, “it just seems like my thoughts begin to wander and my hand simply paints, on its own. On my last painting, I painted details I couldn’t possibly know, but I got them exactly right.”

Her new client, Sean, has his own “gift.” He is an empath; he senses people’s feelings. But the painting he commissions from Kira indicates shocking secrets about his late father and becomes the vessel for a malevolent entity that had possessed him in life. “When you started the painting, I had two strong thoughts in my mind,” the unwitting Sean shares. “One was you were in danger, and the other was that the ‘blackness’ was back.”

Not surprisingly, Summers counts himself a fan of the supernatural anthologies The Twilight Zone, The Outer Limits, and Night Gallery. He’s fascinated by the worlds created by Tolkien and Robert Jordan for their respective sagas, The Lord of the Rings and The Wheel of Time. He grew up enthralled by the works of Isaac Asimov, Edgar Rice Burroughs, Robert Heinlein, and David Eddings.

He is also a fan of Dean Koontz and Stephen King, as is evidenced by the book’s literally nightmarish passages, as in this bad dream that opens Chapter 4 and hints that Kira’s paintings capture much more than a mere likeness:

The face was all she could see, large and looming in the darkness. A giant displaced head like the Cheshire Cat, leaning over her angrily. The face was unfamiliar, she thought fleetingly, and as it wavered, it twisted into a visage of anger incarnate.

She cowered back, not even knowing where she was, but as she shrank away the face began to yell. It had the volume of a train horn. “IT’S YOUR FAULT! WHY DID YOU DO THIS TO ME!”

But Summers grounds the more outré elements of his story with a respect for the creative process. He says that he researched painters and their methodology to portray the scenes of Kira at the canvas from the artist’s point of view. “This book is more about the results of the [act of] painting and the spiritual interactions.”

As to his own process, he shares that he does not outline. “I found out—and this tickled the fire out of me, I’m here to tell you—that I have something in common with Dean Koontz,” he says. “Once I come up with the concept, I sit down and the characters pretty much write the story. I don’t know how it’s going to end when I start writing.”

This sounds much like Kira’s process when she paints. “You’ll find a bunch of me in my books,” Summers says with a laugh. Sean, too, writes poetry. Summers points out that the Kirkus reviewer was not a big fan of Sean’s verse. “That’s all right,” he states.

Summers brings to his newfound passion for writing the same dedication and discipline he brought to gymnastics and running three franchise restaurants in Texas and Oklahoma (his father co-founded the Kettle Pancake House chain). “I did that for 10 years,” he states. “I wouldn’t wish a 24-hour restaurant on my worst enemy. It’s like having an infant that never grows up; the minute you take your eyes off it, bad things happen.”

With a full-time job on the exploration side of the oil and gas industry, he writes in his spare time, dedicating himself to writing in the morning between 5 and 6:30. The goal is 500 words a day, though he confesses that of late, he is spending more time drawing on his entrepreneurial skills to market his books, which now include the other two volumes in the series, Brush With Fire and Brush With Evil, along with Mayan Legacy, an apocalyptic thriller.

For other aspiring writers, Summers has one piece of advice, which he credits to Winston Churchill, who advised his audience during a commencement address at his alma mater, Harrow School, “Never, never, never give up.” (Accounts of Churchill’s speech vary, but to quote the John Ford Western, The Man Who Shot Liberty Valance, “When the legend becomes fact, print the legend.”)

When asked what satisfaction writing gives him, Summers responds, “My goal is [to] give back to others the joy I have gotten from reading over the years. More than anything else I want people to enjoy the read. I don’t have any huge ax to grind. I just want to make people happy.”