We talk to the creators of Quit Calling Me a Monster! 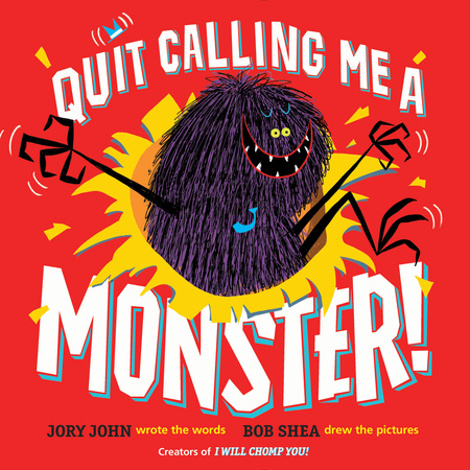 Not only are Jory John and Bob Shea comedian-level funny—they’re also stand-up guys.

They write smart books for kids (I Will Chomp You!, Quit Calling Me a Monster!). They make sure to shout-out their editor and art director (Maria Modugno! John Sazaklis!). And when your computer overheats and you lose all the files from their phone interview, they graciously agree to a do-over.

Jory John: Well, that’s a good question—that’s a different question than the last time....This is going to be a much harder interview, I can tell. This is like the super interview. Absolutely, I’ll be flop sweating by the end of it.

JJ: Floyd Peterson. Let’s see if I can muster up—

JJ: Good point! Floyd Peterson is all of us. I take that back—let’s start again.

Floyd Peterson is the star of Quit Calling Me a Monster! (ages 3-7)—an all-around good guy. Drawn by Shea and written by John, Floyd is emotionally expressive, eloquent, polite, and nattily dressed in a tiny blue hat and tie. He just happens to have a large, peanut-shaped body covered with purple fur, which

often gets him mistaken for a monster.

“It really bothers me when you call me a monster without even thinking about it,” John writes, as a little girl points and shouts at Floyd from a mall escalator. “ ‘There goes a monster!’ you exclaim when I pass by.” (He’s just trying to enjoy a triple-scoop ice cream cone.)

“ ‘Mommy, save me from that monster!’ you holler when I’m just trying to get some groceries,” he writes, as a little boy points and shouts at Floyd in the cereal aisle. (He’s attempting to read the back of a box of Monster Bran.)

“Floyd sees himself in a certain way,” says Shea, “that’s just a normal person trying to have ice cream and get cereal and get things done. And here comes the world telling him no, you’re this other thing.”

“He’s just this harmless guy,” adds John, “who accidentally ends up under the bed, or at the back of the closet, or behind the shower curtain, or in the glove compartment...”

Under the bed? Back of the closet? Mmhmm. Sounds pretty monstrous to me.

“Okay, okay. Okay! I’m technically a monster,” John writes. “ .... Still, I really don’t like being called a monster one bit. How would you like it? You wouldn’t—that’s how.”

For those with the ability to suspend judgment, Stop Calling Me a Monster! raises excellent points while generating much pleasure. Indeed, John and Shea agree, openness is a quality that makes young readers a joy to write for.

"When you write for kids, they’re onboard from the get-go,” Shea says. “If anything, I have to be sillier or more absurd than I normally would be. For adults, it’s—Monsters don’t shop in the mall. How come he has a little blue tie on? It’s not even attached to anything! There’s no connection!—but kids are

like—Monster’s got a blue tie? Great! Makes sense to me!

“It’s on the author and illustrator to push that world as far as you can,” he says. “It’s a huge opportunity to be creative, which makes it so much fun—and a challenge.”

Megan Labrise writes “Field Notes” and features for Kirkus Reviews. Photo above left is of Jory John photographed by Feather and Twine; the photo to the right is of Bob Shea.