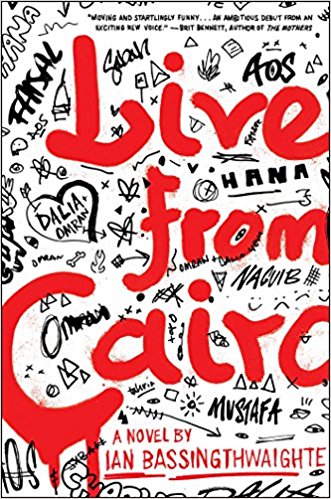 Looking through the piles of July books surrounding my desk, what jumps out at me is the number of first novels that have gotten starred reviews. Here are a few of them for your summer reading pleasure:

Live from Cairo by Ian Bassingthwaighte (July 11): Hana is an Iraqi-American who’s just arrived in Cairo to work for the U.N. refugee office. Our reviewer says, “The ironies of bureaucracy and wartime, à la Catch-22, meet the ironies of love and sacrifice, à la The Necklace, profoundly humanizing the global refugee crisis. Bassingthwaighte’s virtuoso debut deserves the widest attention.”

Out in the Open by Jesús Carrasco (July 4): “A stark debut novel details a young boy’s flight from danger across a desiccated, dangerous land….Carrasco’s unnamed protagonist begins his journey cowering in an olive grove while men shout his name. ‘He had caused an incident’ at home, necessitating his escape….Harshly and elegantly told; a quest that feels both old and new.”

What We Lose by Zinzi Clemmons (July 11): “This is a big, brainy drama told by a fearless, funny young woman—part philosophy, part sociology, and part ghost story,” our reviewer says. Thandi, the narrator, is the daughter of “two mixed-race parents—a South African mother and an American father.…When her mother dies of cancer, Thandi must come to terms with the loss—including her strongest link to family in Johannesburg.” In case you missed it, check out Clemmons talking about her novel’s autobiographical roots in the cover story of our July 1 issue.

The Graybar Hotel by Curtis Dawkins (July 4): “Dawkins is an MFA graduate serving a life-without-parole term in a Michigan prison for a 2004 murder [and] a keen observer of the psychological tools inmates use to sustain themselves behind bars….Dawkins isn’t much interested in the clichéd tales of prison violence, overcrowding, sexual assault, and drug abuse….For [him], the true defining element of prison life is tedium.”