K is Key, K is Black 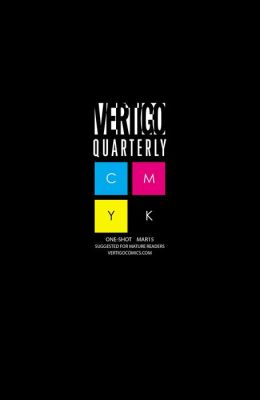 Amanda, black doesn’t erase. Black isn’t nothing. Black is every color in existence, all mixed into one!

You understand? Right now, in this moment, here in this black, you are surrounded by every color.

In 2014, Vertigo Comics embarked on a uniquely concept-driven comics anthology project. Vertigo Quarterly: CMYK is a four-part series of one-shots, referencing the components of the four-color printing process: Cyan, Magenta, Yellow, and Black. Starting in spring of last year, each quarter Vertigo released a different one-shot with stories inspired by one particular color of the printing process.

This week (on January 28), the quarterly anthology came to a triumphant close with the release of Vertigo Quarterly CMYK: Black—black, represented by the letter “K” for key. In the printing process, black is the key plate to which the other three colors are carefully aligned; it’s the key of the black plate determines the shade of every other color in the print. In the context of this anthology, the idea of “black” is taken as a literal color, as a way of interpreting the world, as an impression, as a beginning, and as an ending. It’s the inspirational center-point for this fourth and last one-shot, rounding out the collection of colors in dramatic, dark finish.

And it is brilliant.

Collecting nine separate stories that span several genres, there is something for everyone in Vertigo Quarterly CMYK: Black. For the established Vertigo fan, there are stories from the likes of House of Secrets’ Steven T. Seagle and Teddy Kristiansen; for the literary fan there’s the work of National Book Award finalist Gene Luen Yang (Boxers/Saints). There are stories of horror and speculative fiction, and insightful, painful stories of the tragedy of war, and the sacrifices of growing up. This fourth issue is, I repeat, brilliant.

The anthology opens with a tense lightning-fast punch of a story: sci-fi horror “The Dying of the Light” by Francesco Francavilla, in which a crew making repairs to a space station in low Earth orbit observes the stars go out and darkness descending on them. It’s a powerful exercise in the fear of the dark—and it also sets the tone for what to expect in this particular collection.

“Super BlackOut” by Gene Luen Yang with art from Sonny Liew explores the heartache of loss, and a peculiar application that can black out any unwanted noise from one’s life—literally. It’s also a hopeful story, though, about possibility and change (and the story from which the leading excerpt at the start of this review is lifted).

In contrast, “Sweet Tooth Black” by Jeff Lemire is a strange fantasy, about a boy with antlers and deer-like features (Saga-esque, really) who listens to his father’s rule and does not leave the woods—even when it means harm to others. It’s a story about questioning order, and the consequences of blind obedience. (I loved this story very much.)

“Fade” from Steven T. Seagle and Teddy H. Kristiansen is a series of dreamlike vignettes, bookended from black to black. Surrealist and foggy, “Fade” is what one would expect from the House of Secrets team.

My first favorite story of the collection, “The Night of the Black Stant” by David Baillie and Will Morris, is another speculative fiction story, spanning fantasy and sci-fi. Following a tribe of Ikaru, this particular comic tells the story of young Chilka on the eve of her womanhood ritual—to embark on a pilgrimage in the woods and return with the corpse of an enemy to her Ikaru tribe. Unlike her sisters, Chilka vows to slay a Black Stant—the monsters who raid and take many of Chilka’s kin. And she keeps that vow, though it comes at great, terrible cost.

“American Gothic” by Mary H.K. Choi and the always amazing Ana Galvañ follows the black theme to a high school, where a teenager struggles with her family’s stances and issues—and doesn’t rebel against them so much as she is desperate to fit in. Eerie and effective and pitch-perfect with Galvañ’s iconic art style.

My second-favorite story in the anthology is “Black Death in America” by Tom King and John Paul Leon. In my mind, this is the most powerful and affecting comic of the entire collection—taking the actual words and story of Henry Johnson, known as the “Black Death,” a U.S. soldier as recorded by W. Allison Sweeney in The History of the American Negro in the Great War. Johnson singlehandedly fought off Dutch soldiers in 1918, suffering 21 wounds and saving a fellow platoon member, but died destitute and forgotten just a decade later. This story takes the prompt of “black” and exposes the injustice and institutional racism toward African Americans in the 1920s and beyond, particularly for war veterans looking for work after serving their country. Illustrated in blunt black and white shadow, “Black Death in America” is a story that everyone should read.

The next story, “Black Heaven” by Si Spencer and Nimit Malavia, questions the traditional rules and symbols of love—and two characters who challenge each other and these signs and dictates.

Finally, “Farewell” by Fabio Moon closes out the collection with a dreamlike, watercolor promise of expectation and things to come. (Personally, I found it the weakest of the collection—but your mileage may vary.)

If you are looking to start your year with a sampling of the strange, the profound, the speculative in comic form, I implore you to try Vertigo Quarterly: CMYK.

You won’t be disappointed.