Author of THE HIP GIRL’S GUIDE TO THE KITCHEN 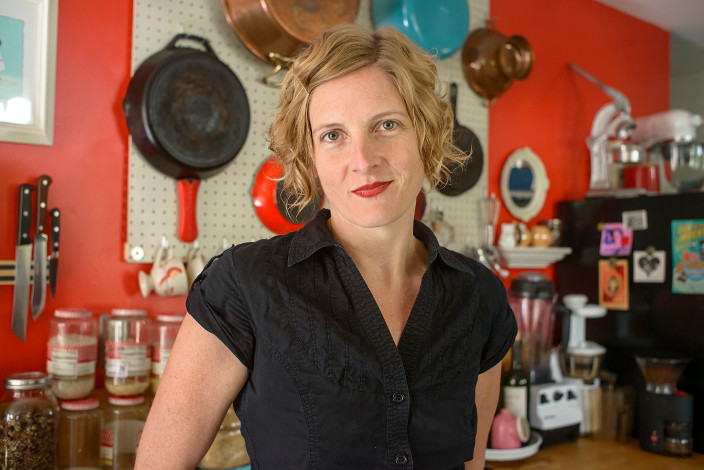 Kate Payne didn’t exactly inherit the domestic goddess DNA. Her mother doesn’t cook, and her grandmother’s nickname is “Bertha Burnham.” “My grandmother is a terrible cook, and she was notorious for burning the buns. They were the last thing to go in the oven and always the thing that was forgotten,” says Payne, whose mother once confided that, as a girl, “‘I never knew that dinner rolls weren’t supposed to have black bottoms.’”

In that regard, The Hip Girl’s Guide to the Kitchen represents a triumph of nurture over nature. Payne, author of The Hip Girl’s Guide to Homemaking and the popular blog of the same name, has developed the skills to stock, utilize and maintain that intimidating room with the sink and the stove—and they’re all the more inspiring for being hard won.

“When I was in my early twenties and had my first job, I would go to the grocery store because I enjoyed going, and put things in the cart that made me feel excited or happy. None of that stuff connected to actually making some sort of meal, at least in the near future,” says Payne, who’s now thirtysomething, married and living in Austin, Texas. “[My wife and I] both are self-employed, so we’re still on a budget, but it’s great to be able to have whatever it is you want to eat, even if it means being a little more thoughtful.”

The Hip Girls’ Guide to the Kitchen, subtitled A Hit-the-Ground-Running Approach to Stocking Up and Cooking Delicious, Nutritious, and Affordable Meals, provides a no-nonsense approach to cooking that emphasizes quality, nutrition and economics. Advice ranges from the commonsense yet essential (always plan one meal ahead), to particulars like which pans to buy (cast iron over nonstick, always), where to get them cheaply (just-married friends may easily part with old pots and pans as their gift registry fills) and when to splurge (refurbished Vitamix, anyone?). “I now try to view cooking as a challenge and opportunity to come up with creative meals from things we already have, a minor shift that keeps my wheels moving and keeps me just out of the former drudgery and stress zone. If my attitude (and aptitude) can change, I’m betting there’s hope for you, too,” Payne writes.

In Payne’s book, waste is enemy number one. “I’m not judging, especially since I’ve thrown out my fair share of food over the years, but we have to look at where we stand right now,” she writes, right before relaying this eye-popping fact: “On average, a family of four spends $1,350-2,275 on food and drinks that are never consumed.” With wisdom from foodie heroes including Michael Pollan, Irma Rombauer and Deborah Madison, but without getting preachy, Payne compels readers to be more informed eaters.

She also advocates community. There’s a whole section entitled “Feeding Others,” chockablock with tips for organizing buying clubs, food swaps and parties. Payne, who’s organized successful large-scale swaps in several cities, notes that exchanging food with friends and neighbors brings the added bonus of combatting the estrangement one might feel alone in the kitchen.

“When you’re in the suburbs or your apartment in Brooklyn, it can feel really isolating to try to keep house. Everyone else is out there doing the exact same thing you are, so when I looked at the kitchen I think one of the most important things is to try to make it as shared of an experience as possible, whether it’s that you learned to cook with a roommate or friend so you can both make meals together, or you’re having people over and making food projects together,” she says. “I think it makes it more of what it’s supposed to be about: sharing a connection over food.”

Just don’t let any overly ambitious hosting dreams deflate your day-to-day mojo. Concentrate on establishing your own food routine before branching out, says Payne. “You don’t have to have dinner parties. You don’t have to go above and beyond just feeding yourself delicious things. You do not have to make your marshmallows. You don’t even have to make your own granola,” she says. “It’s fun to not pay $12 a pound for granola, but if you don’t feel like it, just make yourself breakfast. If you leave at four a.m., then pick another meal, just do one that will work for you. In the process of planning one meal for yourself, you can start to experience what it’s like to have a kitchen routine, which is really the only skill you need.”