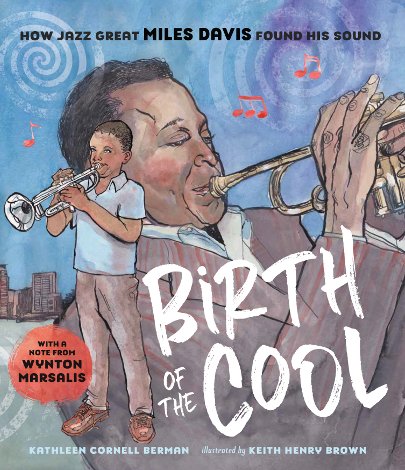 Birth of The Cool: How Jazz Great Miles Davis Found His Sound, written by Kathleen Cornell Berman and illustrated by Keith Henry Brown, focuses on the positive highlights and digestible portions of Davis’ musical history for young readers with a kind of focused intention that manages to educate a new generation of music lovers and musicians while also skirting some of the more negative aspects of his biography.

“I really wanted to focus on how he developed his unique sound,” Berman says. “As a kid, I fell in love with his sound, and I was extremely curious about it, so that was the start of my research. I was also inspired by the way he focused and developed a really unique sound.”

Berman and Brown were less concerned with including every facet of Davis’ life and more with giving young people someone they could relate to. “So I focused on the things kids could relate to—he loved swimming, he loved baseball just like any other kid,” Berman says. “But also right away I wanted to make sure kids knew that he absolutely loved music.”

Brown was drawn to the project because of Berman’s text. “I really admire Kathy’s script and the message that with music-making, writing, or doing any kind of art, you have to learn your craft,” he says. “We tend to see everyone fully realized; artists don’t really talk about practicing, for instance, because maybe they think it’s boring, but in order to be really great, you have to practice a lot. The hardest thing in the world is developing your own sound.”

But there are some challenges to the Davis biography for young readers. In the early 1950s, when he was developing the “cool jazz” that became part of his signature sound, he was also addicted to drugs. He was known to struggle with his own personal demons, including a storied history of domestic abuse.

These last aspects of his biography inspired Berman to focus instead on the various mentors Davis had in his life as a young person in the form of teachers and many others; she cuts off the narrative when Davis was 29. “I wanted to create a portrait of him that was a little bit different from other biographies,” she says. “I wanted kids feeling something at the end of the book instead of just being filled with facts.”

Brown agrees, saying that when he first heard Davis, he didn’t really understand what he was hearing, only that “it sounded like art. He created music that wasn’t boxed into words or even accepted patterns,” he says. “To see a black man do that was inspiring. To see a black man do that…there aren’t that many visual artists who were black men, at least there weren’t at the time. This was before (Jean-Michel) Basquiat. It was really important for me because it suggested to me that I didn’t have to do everything to convention. I could have self-expression.”

Joshunda Sanders is a writer and editor living in the Bronx. The photo of Keith Henry Brown is by John Abbott.