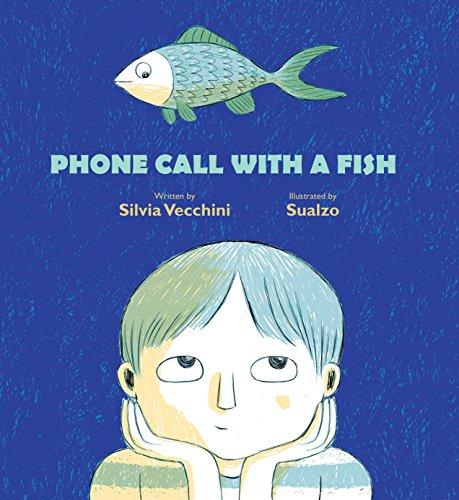 There’s no two ways about it: we live in a deeply divided country right now. I’m not here to talk about the why’s and how’s of it, but I do know that—whether or not adults talk to children about what goes on in the country (politically, socially, etc.)—children are taking it in. They see the adults in their lives forming opinions about “the other"—sometimes, sadly, with a dearth of information. Children see this happen on national, as well as more personal, scales. On my mind today are three new picture books on shelves, all about ditching misguided preconceptions of others and featuring characters who reach out in an effort to truly connect and understand—two inquisitive girls and, of all the things, a giant, green, Shrek-like, bearded ogre with a ginormous club.

Phone Call with a Fish is an Italian import (originally published last year), written by Silvia Vecchini and illustrated by her husband Antonio Vincenti, a self-taught artist whose pen name is Sualzo. The story, dominated by a primarily aqua-blue, ocean-esque palette, is told from the point of view of a fairly extroverted and talkative girl, who is fascinated with a boy in her class who “doesn’t speak. Well, he talks at home. But not at school.” While other parents whisper to their children that something must be wrong with him, the children’s teacher says he’ll “eventually open up.” This wording conjures up images of flowers in the girl’s mind, but she knows “he isn’t a flower. He’s a boy.”

After failed attempts to reach him, she finally does so on a class field trip when she sees an unusual display—a fish tank with a sign next to it that says that fish are not mute and that, in all actuality, they communicate with one another. There is an old phone handset floating in the water, connected to a phone outside of the display. The girl picks up the phone and listens. She hears “mysterious, beautiful, secret sounds … from the silence of the water.” (Let us pause to appreciate this beautiful moment.) She then summons the quiet boy in her class, and he listens too, a smile spreading across his face. Ah, she gets him.

At the story’s close, the girl receives a phone call at her home. It’s not explicitly stated that the boy has called her—we see images of fish here—but it’s clear that he’s finally reaching out to a classmate who was considerate enough to make an effort to understand him and patient enough to really listen. The book is dedicated, in part, to “all the little fish who are waiting for a phone call.” Share this quiet, thoughtful book with children (it’ll be an act of subversion in their loud, busy worlds); the story serves as a reminder that there are levels of introversion, and that the deeply withdrawn, whatever it is that drives their silence, may also seek understanding.

Much like this boy’s classmate, the protagonist of Travis Jonker’s The Very Last Castle—whose name, delightfully, is Ibb—also possesses a self-reflective and patient nature and isn’t fond of jumping to the same conclusions as everyone else, thanks very much. She lives in a small town that, also delightfully, has a castle at its center, the very last castle of its kind in that city. Townsfolk blithely disregard it; frankly, they can’t remember what its deal is. And no one is allowed in. But, wait. There is a guard who, daily, watches these townspeople walk right by, high from his perch atop the castle.

But Ibb is curious and thoughtful, and Ibb reaches out. Despite everyone filling her with fears and lies about what lies beyond the castle walls, she knocks on its door one day. Things don’t go so well at firs— she sees snakes that perhaps are all in her imagination, fueled by anxieties—but eventually she receives an invitation to the castle. Bravely, she walks inside. She meets the guard, who is unassuming, gracious, and eager for company. Much like the boy in Vecchini and Sualzo’s tale, the guard is grateful to have a new friend in someone who lets an inquisitive kindness conquer her fear of the unknown.

This is a sweet, but never cloying, story and a promising debut from Jonker. (Jonker blogs about children’s books, too. You do read his wonderful blog, right?) Illustrator Mark Pett fills the story with subtle, entertaining surprises. For one, I love Ibb’s distinctive garb (big yellow boots, purple dress with a polka-dotted shirt underneath, and a backpack brimming with personality) and how the townsfolk who bypass the castle and its guard every day are conveyed in shadowy, paler tones. (Ibb gets brighter hues to match her vivid curiosity.) One passerby even breaks the fourth wall to wave at the reader. Oh! And be sure to remove the dustjacket for surprise art, too.

It’s one giant brick wall, not the walls of a castle, which causes confusion and whips up fear in Jon Agee’s newest picture book, The Wall in the Middle of the Book, a story in which the pictures do the heavy lifting and for which the book’s gutter, where the wall lives, is vital.

In spreads that use every inch of space given them (even the front and back covers do so), we see that a small knight on the left side of each spread is pleased that there is a big, brick wall “in the middle of the book.” (Yep, it’s a meta-adventure, as he is fully aware he’s in the pages of a book.) In fact, he’s climbing a ladder to the top of the wall, brick in hand, in order to make it even taller to keep out what’s on the other side—a big rhino, tiger, and gorilla. He is unaware, of course, of what’s happening on the other side. Those big creatures are eventually frightened by a tiny mouse. And because he never turns around or looks down on his side of the wall, he’s unaware that water is rising behind him and that it’s filling with dangerous sea creatures. (This is foreshadowed in a very funny moment by the appearance of a disgruntled-appearing duck behind the ladder, before the water ever appears.) “This is not supposed to happen on this side of the wall!” the tiny knight exclaims, once he sees the rising water. When an ogre from the “other side of the book” leans over the wall to pluck the boy out of the water, saving him, he is bemused by the boy’s fear: “Haw-haw-haw! I’m actually a nice ogre. And this side of the book is fantastic!”

I don’t have to point out to you the relevance of such a story in this day and age in the U.S., given a President who still talks about building walls to keep out others. So, yeah. This is timely. It’s also a master picture book creator at his best. The pacing here is perfect; there’s both abundant deadpan humor and a sincere point made about how dangerous it can be to assume the worst and let fear run the show; and every spread is expertly composed. Agee knows how to use white space like nobody’s business. (That’s professional review-speak for you.)

None of these books determinedly drive home any morals, wrapped up all tidy-like for child readers at the end. All three of these authors know better than to wag their fingers in the direction of children. But their points about connection are made, seamlessly and elegantly, for readers thoughtful enough to listen.

THE WALL IN THE MIDDLE OF THE BOOK. Copyright © 2018 by Jon Agee. Illustration reproduced by permission of the publisher, Dial Books for Young Readers, New York.