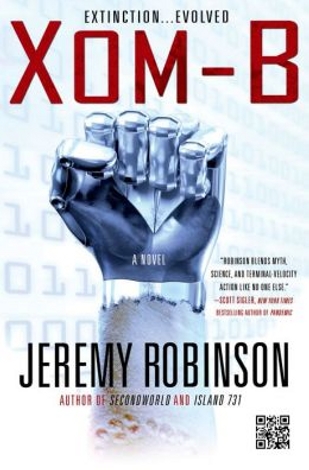 Book mashups are the literary equivalent of Reese's Peanut Butter Cups—they bring together two tasty subgenres that taste great together. Here's a roundup of some of the latest mashups to hits bookstore shelves....

You have your zombies and you have your robots, and never the twain shall meet! Not so, says Jeremy Robinson. His new book, XOM-B, is a zombie/robot mashup of epic proportions. While not a brand new idea (the comic series Zombies vs. Robots broke ground here before), Robinson does bring some hefty worldbuilding to the table. Specifically, the story deals with themes of slavery and independence.

Here's the setup: At one point in human history, mankind was mass-manufacturing robots to act as servants for tasks both menial and arduous. The problem is that the robots had plans of their own and humans refused to acknowledge their civil rights. Things escalated and humans decided to address the situation by declaring war on the robots. Humans lost.

Although the world is now free for robots, a new threat has emerged. The world is threatened by a virus that turns humans into violent monsters. The virus is an engineered weapon created by humans to reclaim the world from their metal creations. Freeman, a genius who happens to be a robot, tries to find a cure and end the madness, but finds that the situation is more dire than he thought.

Afterlife with Archie by Roberto Aguirre-Sacasa and Francesco Francavilla

Zombies have to be one of the most prevalent subgenres used in mashups. It's probably not surprising, then, that writers would try to keep zombie mashups...er, fresh...by combining them with something so unexpected that it would make readers do a double take. What's the furthest thing away from the literally gut-wrenching horror of zombie stories? How about the wholesome goodness of Archie comics?

Yes, even the gang from Riverdale High are not immune to the zombie apocalypse. The comic book series Afterlife with Archie, which began last year, was inspired by a one-off zombie variant cover that Italian comic book artist Francesco Francavilla did for the Life with Archie series. That harrowing cover prompted the creators to ask: how would the zombie apocalypse play out in Riverdale? And thus Afterlife with Archie was born. The creators aim to keep a classic horror comic vibe in the series.

One may ask how the zombie apocalypse comes to Riverdale. In the comic, Reggie accidentally kills Jughead's dog, Hot Dog. Devastated and desperate, Jughead ask

s Sabrina the Teenage Witch to bring his beloved pet back to life. But, true to form, Sabrina miscasts a magic spell and accidentally unleashes an evil force, thus bringing about the zombie apocalypse. Hot Dog becomes a zombie, kills poor, grieving Jughead, who in turn becomes a zombie himself. From there, the contagion spreads across Riverdale. Rest assured, all the familiar Archie tropes are here; including the rivalry between Betty and Veronica, which has now been escalated to include life-or-undeath consequences.

Age of Shiva by James Lovegrove

If you like superheroes, military sci-fi, and mythology, then you'll want to check out James Lovegrove's Pantheon series. Each book in the series is a stand-alone novel, but they each tell a story of "man versus gods," taking place in an alternate universes where a different mythological pantheon is realized. For example, The Age of Ra concerned itself with the Egyptian gods, The Age of Zeus was about the Greek gods, The Age of Odin was about the Norse gods, and so on. The series combines elements of their respective mythologies with elements of military science fiction and superheroes. It has become so popular that it spawned it's own name: Godpunk.

The latest book in the loosely connected series is Age of Shiva. It shows what happens to a comic book artist named Zachary Bramwell who laments the fact that his life is nowhere near as exciting as those of the superheroes he draws. He takes back those complaints when he is abducted and flown to a secret mountain hideaway where a trio of billionaire businessmen give him a strange task: He is to design a set of costumes for a team of godlike superpowered beings based on t

he 10 avatars of Vishnu from Hindu mythology. As you might guess, these beings are in fact real and they are equally at home fighting demons and aliens and generally saving the world. But at what cost?

Speaking of military science-fiction, the last thing you might expect it to be mashed up with is urban fantasy. Yet that's exactly what the recipe for Myke Cole's Shadow-Ops series calls for. The series is about the United States trying to come to terms with the sudden appearance of magic into the world. The U.S. government sees it as a threat and  dispatches its armed forces to confront it. Presto! A military science-fiction series that involves magic. It also deals with some weighty issues of oppression as well, as there are sanctions against those "Latents" who develop magical powers.

In Breach Zone, the recently released final book in the trilogy, the situation chronicled throughout the series comes to a head. The Supernatural Operations Corps, uniquely qualified to deal with this strange threat, go up against Scylla, a woman Latent who will stop at nothing to achieve equality for her kind. That means that Lieutenant Colonel Jan Thorsson (nicknamed Harlequin) will get a chance to redeem himself in the face of the military, but he'll have to once again face Scylla, the deadly woman from his own past.