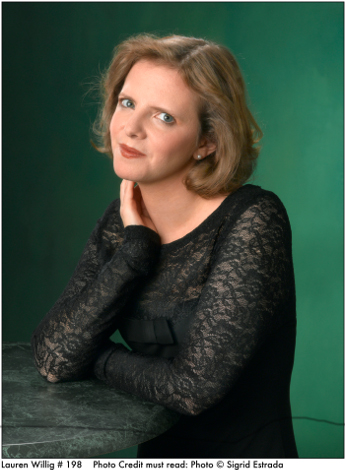 During the recent Romance Writers of America conference, I had the delightful opportunity to sit down with author Lauren Willig to discuss the release of her new novel, The Other Daughter, and the upcoming release of the final book in her hugely popular Pink Carnation series, The Lure of the Moonflower.

Willig’s first book, The Secret of the Pink Carnation, was released in 2005; since then, she has written 11 more books in the series, plus three stand-alone historical fiction novels and a few side Pink Carnation-based novellas and short stories. When I first realized the scope of this timeline, it made me a little dizzy, until I did a little research and discovered that she actually signed her first book contract her first month of law school, finished writing the book during her first year, wrote the second one in year two, and the third in year three. And yet she still graduated magna cum laude. From Harvard.

She continued writing as a litigation associate, but at year two chose to leave law and focus on her writing career. Not surprising, if you know her back story. “Actually, I decided I was going to be a writer when I was about six. I submitted my first manuscript at nine. Can you believe they rejected it?” Willig asks with the dry wit she infuses into so many of her characters.

The Pink Carnation series is known for its humor, its lighthearted intrigue, and its romance. And yet, when I read these books, I am astounded by the amount of research Willig does for each setting and time period. The author’s notes at the end of each book are extensive, a veritable bibliography of first-person accounts of the time, historical tomes of the political events of the era which impact the “lighthearted” plots of these amazing books, and biographies of major players—many of whom are authentically and seamlessly woven into the cast of characters.

I, for one, had no idea that Robert Fulton lived in Paris during the Napoleonic era and was designing submarines for France that could be used as war ships.

At the same time, in a contemporary storyline that weaves through all of the books, we follow the courtship of modern-day couple Colin and Eloise, who must navigate complicated family dynamics, academic politics, film crews, back-stabbing friends and explosive secrets.

On the surface, the books are fun and fluffy, and yet underneath, they deal with deep human turmoil—from sexual and emotional betrayal to conflicted national and personal loyalties; parental abandonment to racism; family, identity, honor, integrity. They sprawl across the globe, from London to India to Napoleon’s court.

In Willig’s recent historical fiction, The Other Daughter, she tells a young woman’s post-WWI story that is intricately tied to identity, masks and self-worth but is so layered and entertaining that you barely even notice the coming-of-age aspects of it.

In many ways, Willig’s storytelling represents the very best of romance, and also the odd place romance and women’s fiction hold in publishing.

“I read my first romance novel when I was six years old,” says Willig. “Whether it’s romance, historical fiction, or mystery, I’ve always read and loved books that focused on women’s journeys, on women finding their place in the world, like The Witch of Blackbird Pond or The Blue Castle, novels by M.M. Kaye and Alexandra Ripley, or Julia Quinn and Meredith Duran.

“But even mentioning all of those names together brings me to a point that I’ve been contemplating lately: I think that what we conceive of as romance is actually shrinking,” she observes. “For instance, as popular as my Pink Carnation books are, especially in the romance community, they are categorized as women’s fiction, mainly because they have so many elements that appeal to a broader reader. Twenty years ago, when the romance field was broader, they would more likely have been categorized as romance. There are pitfalls to writing in-between genres. Sometimes I see commentary from non-romance readers who feel the books read [insert derogatory tone here] too much like romance. I see that as well in other writers who straddle historical and romantic fiction: there’s too much romance for non-romance readers, and not enough for romance readers. And honestly, I find this really sad. I’d like to think we could look beyond genre definitions to the book itself and recognize that not every story fits into a precise pigeonhole.”

Of course, Willig loves romance. “The genre does the best job of both representing women in fiction—focusing on the heroine’s journey—and reflecting the full panoply of human character; who we are and what makes us tick. We love intensely, we have to figure out who we are and how we are going to integrate into our communities and the greater world. I think you find the deepest and most satisfying character studies in storylines that include a romantic arc. Romance is an exploration of human nature in its most intimate form.”

Of course, as a romance advocate I couldn’t agree more. Willig’s books, in my opinion, are some of the mostly slyly intelligent books on the market, but because they are also romance novels, I’m sure they are more often than not reduced to that generally derogatory category.

Which is a shame. So, if you’re looking for fun, fascinating, fulfilling books that integrate sparkling romance, intelligent humor and deep emotions of every variety, be sure to check out Lauren Willig. You’ll be glad you did.

Bobbi Dumas reads, reviews, blogs and advocates for romance and women’s fiction in a variety of places, mainly NPR, Barnes & Noble, Kirkus and her own pro-romance event.