Lessons From An Ugly Stepsister 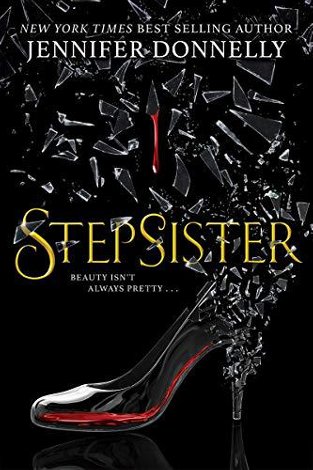 I’ve mentioned before that I love Jennifer Donnelly, and wow, I think her newest, STEPSISTER, which came out last month, may be my favorite. (It’s a tough call. All of her books are wonderful.)

Isabelle should be blissfully happy-she's about to win the handsome prince. Except Isabelle isn't the beautiful girl who lost the glass slipper and captured the prince's heart. She's the ugly stepsister who cut off her toes to fit into Cinderella's shoe . . . which is now filling with blood.

Isabelle tried to fit in. She cut away pieces of herself in order to become pretty. Sweet. More like Cinderella. But that only made her mean, jealous, and hollow. Now she has a chance to alter her destiny and prove what ugly stepsisters have always known: it takes more than heartache to break a girl.

Evoking the darker, original version of the Cinderella story, Stepsister shows us that ugly is in the eye of the beholder, and uses Jennifer Donnelly's trademark wit and wisdom to send an overlooked character on a journey toward empowerment, redemption . . . and a new definition of beauty.

Kirkus liked the book, saying, “Isabelle’s emotional and triumphant journey of self-realization proves that beauty can be found in so much more than just a pretty face,” and calling it “A breathlessly exciting and utterly satisfying fairy tale.” (review here)

Donnelly is an achingly lovely writer, but also very flexible. She’s written time travel novels, historical fiction, a YA series based on mermaids, and the gorgeous LOST IN A BOOK, a modern fairytale featuring Belle from Disney’s BEAUTY AND THE BEAST, which came out in collaboration with the live version of the movie in 2017. (Kirkus reviewed it here.)

STEPSISTER follows in the same vein as LOST IN A BOOK, with a tone that harkens back to ancient tales of enchantment and magical creatures who make bets as to whether or not Isabelle will survive her lessened circumstances, or the murderous enemy who threatens France and her own small corner of the kingdom.

Yet what STEPSISTERS does, elegantly and eloquently, is remind us that we are at our best and most powerful when we embrace our whole, true selves, even when they—people/society/institutions/parents/anyone—tell us we’re not valuable for the very things that make us exceptional.

It’s a thought-provoking story, both entertaining in a swash-buckling way, and contemplative, quietly urging readers to consider the roles of fate, luck and determination in their lives, encouraging them to reflect on the way we’re shaped and formed by the stories we tell ourselves and the stories we’re told about ourselves, but also by the good that comes from the courage to act, and the decision to change.

I think it’s clear that I’m always impressed with Donnelly, but this one is special, especially in the wake of #MeToo and the broader conversations on being a woman, and the continual struggles women face everywhere. What is strength? What is beauty? How does it affect us when we’re continually told to conform, to smile, to be pretty?

And yet, in her storytelling, these questions aren’t sledgehammers. They’re golden threads, intrinsically woven into a fascinating story that revolves around Cinderella’s stepsisters, and brings them to life as wounded but redeemable.

On the side are a handful of magical characters who heighten the stakes and become emotionally connected to Isabelle, acting as metaphors for the power of choices, and courage, and creating a life from the things that make us our best selves.

A beautiful, breathtaking book. Fierce, graceful, wise and tender, like any woman at her very best. You should read it.