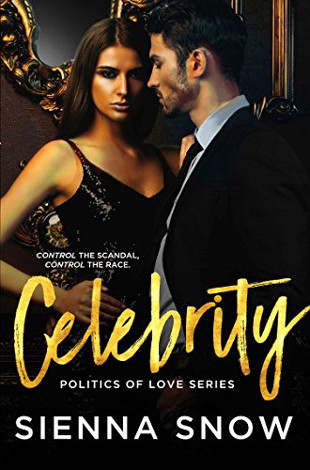 Are there any themes you’ve been especially interested in diving into lately?

I’ve heard from a lot of readers that they couldn’t be less interested in reading billionaire romances these days (for a variety of reasons—*cough), but there seems to be a rise in the popularity of political romances.

I can get behind that!

I did a little checking and found that some authors I like are dipping their toes into political romance. Yay!

Later this month (5/24) Sienna Snow is launching a new series, Politics of Love, with Celebrity.

Celebrity attorney, disinherited daughter of a technology billionaire, and the former dirty secret of a federal judge with conservative ties.

I never wanted to be famous. I prefer life out of the spotlight.Now, thanks to my new client, I am surrounded by the media, and my face is on the cover of every magazine.

To top it off, the man who kept me hidden and shattered my heart is determined to get me back, and nothing will stop him.

What does a girl do when she's had enough of others dictating her life?

She takes back control.

I have a new plan for the future, one that will use my newfound fame to lead me to Washington D.C. and the halls of Congress.

I am Samina Kumar. Candidate for Senate and CELEBRITY.

I sent a message to Sienna to tell her I thought the book sounded awesome, and asked her if she had any other recommendations for political romances, and she said we needed to check out The New Camelot series by Sierra Simone. But be warned: According to Sienna, the books are “crazy hot.”

The first book is American Queen:

My name is Greer Galloway, and I serve at the pleasure of the President of the United States.

This is the story of an American Queen.

Sienna also rec’ed an author I love, Selena Laurence, who has a series of politically-themed books, Powerplay. One of them, POTUS, explores the love affair between the first female President of the Uunited States and the Egyptian ambassador:

She’s the President of his heart.

A leader beloved by her nation.

Jessica Hampton is the heir to a political dynasty, and the first woman President of the United States. For six years she has given up everything in order to fulfill her late husband's legacy. But now, as her term in office draws to a close, she wants nothing more than to finish with the dignity her family demands. But when Jessica begins to negotiate an important Middle East accord with the sexy Egyptian Ambassador, being President takes a back seat to being a woman.

A man trapped on all sides.

Kamal Masri knows all about being an heir. He's not only Egypt's Ambassador to the US, he's the first-born son of one of the world's wealthiest men. Kamal's father has controlled his fortune, his career, and now possibly his life, because when the Egyptian parliament instructs him to negotiate an accord that threatens his father's illegal business dealings, all hell breaks loose. But as dark forces from the far side of the globe conspire to destroy the accord, Kamal is prepared to do whatever it takes to win Jessica's love. He'll fight to protect her, even from his own country.

I haven’t read this series, but that book sounds like it’s loaded with sexual tension as well as romantic and political conflict. I’m a fan of Laurence thanks to her rock star series, LUSH, and have had my eye on that series for a while.

And hey, look at that—when I went to find that POTUS blurb, I discovered that the boxed set of all five Powerplay titles is currently $.99! I downloaded that right away! One of the titles is even a Christmas romance {happy sigh}. POTUS on its own is priced at $3.99, so jump on that sale before it ends. I imagine it won’t last too long.

Okay friends! Any other great political romances you think we need to know about? I personally need a little romantic fantasy to replace the current soul-crushing political reality. So recommend away please!