Letting the Devil In 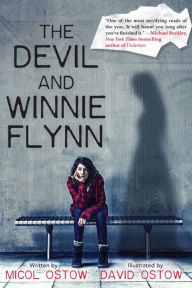 We’ve all seen Evil Dead. Whether you believe in these things or not, it’s never the best idea to go around reading from the ancient journal you dug up in the cabin cellar. That’s just good common sense.

—The Devil and Winnie Flynn, by Micol Ostow, illustrated by David Ostow

Last week, I talked about The Dead House, a multi-format horror story that fits nicely into the found footage movie genre. Happily, this week, I’ll be talking about another book from the same shelf: The Devil and Winnie Flynn, written and illustrated by siblings Micol and David Ostow.

Shortly thereafter, Winnie Flynn’s aunt—her mother’s estranged sister—shows up with an offer: come to New Jersey for the summer, work as an intern on her paranormal-themed reality television show, and get to know the Leader side of the family. Winnie, who needs a change of pace and scene—and who loves horror movies despite being a dyed-in-the-wool skeptic—accepts.

Once she’s there, and as she gets to know the cast and gets more personally involved with the search for the truth behind the legend of the Jersey Devil, her role morphs from behind-the-scenes gopher into leading lady. In her mind, being a skeptic doesn’t equate to ignoring evidence—she’s familiar enough with the horror genre to have learned that lesson!—and as everything gets weirder and spookier, she finds herself not only questioning the facts surrounding  her mother’s death, but her own longstanding personal worldview.

While there’s a disappointing plot point near the climax—there’s nothing in the rest of the book that leads up to the ultimate resolution, which makes it feel too easy and detracts from the realism of the rest of the narrative*—overall, I loved it. It’s smart and funny and atmospheric; all of the various formats—Winnie’s ongoing journal/letter to her best friend, the snippets of screenplay, the documents and wiki pages and illustrations—integrate seamlessly into a larger whole; it very well might inspire some readers to watch reality television with a slightly more critical eye; and it’s just as much about grief and loss as it is about chasing ghosts.

Both Ostows clearly have a strong background in the horror genre. Rather than relying on the usual suspects, like Buffy or Supernatural, their characters reference lesser-known movies—at least one that was new to ME, even—as well as debating and discussing tropes and genre conventions and so on. I’d love to see a full list of movies mentioned, and readers who’re looking to expand their knowledge of the horror world would be well-served by using the book to fill up their Netflix queues.

The Devil and Winnie Flynn completely works as a stand-alone, but I can’t help wanting more—and I’d love to see how Team Ostow would choose to navigate the changes that Winnie & Co. have experienced by the end of the book. I’d very much be up for a sequel.

*I admit that this is a somewhat ironic complaint to make about a story that takes place during the filming of reality television, but I stand by it.