Life After the World Ends 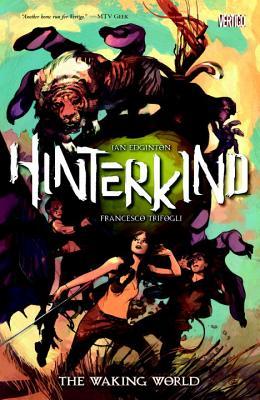 There are a lot of post-apocalyptic stories out there. Perhaps one of my favorite series, which I didn’t even realize was a post-apocalyptic story while reading the books, is the Shannara series by Terry Brooks. I probably came to these books later than most, having ravenously consumed the first trilogy of books—The Sword of Shannara, The Elfstones of Shannara and The Wishsong of Shannara—in my early 30s after rediscovering my love of fantasy and science-fiction books after roughly a decade-long hiatus. It wasn’t until years after, while discussing the books with friends, that someone clued me into the fact they were post-apocalyptic. Somehow, I just missed it. Happens from time to time. I get so focused on one thing and I miss another.

I bring that story up because I can’t help but draw some parallels between the Shannara books and DC/Vertigo’s Hinterkind Volume 1: The Waking World, written and created by Ian Edginton, and illustrated and co-created by Francesco Trifogli.

The similarities: both are set on Earth following an apocalyptic event, both tell a sort-of coming-of-age or heroes journey centered on young people from a village leaving home on a quest (of sorts in the case of Hinterkind), and both include a re-awakening of the old races who pre-date humans and return to claim their rightful place in the world. For Hinterkind, this means the Sidhe, Trolls, Ogres, Goblin-folk, etc.

In the opening pages of Hinterkind, we’re introduced to a world where The Blight killed billions of people, putting the human race on the top of the endangered species list. On the island of Manhattan, a small village survives. Everyone has a role in this society, and every role supports the greater good of the village. Prosper and Angus are two such villagers, and neither appreciates their roles as farmers. Prosper wants to be a hunter. Angus isn’t sure what he wants. But the world is full of dangers; wild animals, infection, disease, things that were easily cured a few decades now can spell doom for a village like theirs.

This is where things get interesting. Although not the focus of the story (yet), their village is self-sustaining, and connected via CB Radio to other villages like it in Chicago, Albany and beyond. Only those other villages have stopped checking in and aren’t responding. Any of those dangers listed above could be the cause, but the only way to know for sure is to send someone to investigate. You’d think this is where our young heroes would start their quest, and you’d be wrong. There’s a nice little twist and they aren’t sent. But Angus has a secret only Prosper knows, and his fear that it’ll get out and force the village council to exile him drives him to run away. Prosper follows. Adventure (and trouble) ensues.

While Prosper and Angus are our main characters (or so it felt to me), there are others, including The White Queen of the Sidhe, whose power on Earth is growing again in the wake of The Blight. The Sidhe have a

bounty on humans and have been gathering them on the west coast for some time. Bounty hunters like Star and Jon Hobb travel the country seeking out humans and turning them in for the gold and silver. Well, the ones the Ogres and other magical creatures hired on as muscle don’t eat first.

I really enjoyed this book. It called back memories of Shannara with things like the underground military base, while creating an entirely new and engaging world and mythos all its own. I was left wanting to know more about this Blight and how it “ended” the world. And Prosper, while initially an intriguing character, started to fall flat as other characters came and went and crowded the panels. Angus has two secrets not just one, I think, and neither were really explored in this volume, making me hope they are in future books.

The story still engaged, though, and kept me hooked through until the end. The art is dark and lush in the Vertigo style, as it were, and I loved it. Dark where it needs to be, setting tone and mood. Not so dark as to bring the reader down. The creature designs are pretty nifty throughout. I especially enjoyed the six-armed troll.

Hinterkind is a nice post-apocalyptic coming-of-age hero story and, so far, appropriate for all ages.