Life Is What You Make of It 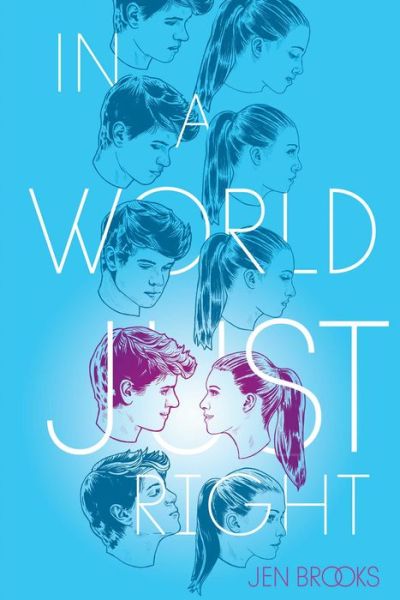 BOOK REPORT for In a World Just Right by Jen Brooks

Relationship Status: Be My World-Maker

Whoever designed this cover just gets this book. This isn’t a cut and dry love story; there’s no need for stock photography of a boy and a girl sitting by a lake at sunset. Its main character is a boy, so plopping on a girl in a fancy dress wouldn’t make sense either. In a World Just Right is a story about a confused boy, and his somewhat confusing life/longing. So this cover is pretty dang perfect. Also, it’s just plain cool.

When Jonathan Aubrey was 8, his family went on a vacation. Thanks to a terrible plane crash, Jonathan was the only one to return home alive. To escape the terror and the trauma, Jonathan wishes himself into another world—and was extremely surprised to find that he actually thought it into being.

Since that day, Jonathan has created other worlds to escape his past. His favorite world, Kylie-Simms-Is-My-Girlfriend, is close the real world, but in it, his longtime crush is his longtime girlfriend, he’s a star of the track team, and he has friends. In the real world, Jonathan has or is none of those things. Until, that is, the fateful day when something goes awry.

Jonathan is a good kid. He’s had a rough time of things, but has been given a great gift, that of being a “world-maker.” This gift comes with a price, however, in that he uses it to escape from the real world to the detriment of his school and his relationships with others. Jonathan could be everything he is in the other worlds if only he had a little more confidence. He just needs someone to break through that wall of protection he’s erected around himself.

On the one hand, it’s kind of sweet that Jonathan has such powerful feelings about a girl that he creates an entire world around the two of them being in love. On the other hand, he’s basically forced a girl into loving him, which is SUPER NOT OK. Part of him realizes that this isn’t fair—to either of them—but he still visits her world every chance he gets.

Although I’ve never been a teenage boy, much less a teenage boy who’s experienced something as traumatic as Jonathan has, Jen Brooks has done a great job (at least, from what I can imagine) at creating a believable young male protagonist who’s very conflicted about his life. The language, Jonathan’s responses to certain situations, even the worlds he creates for himself, all seem like something a boy would say or do. I liked being inside Jonathan’s head, even if I disagreed with him at certain points along the way.

Brooks has also created a story that rarely gets the reader confused about which world they’re reading about, which can be difficult when working with alternate dimensions. And although I guessed about the ending a little over halfway through, I wasn’t certain until the end.

As a world-maker, Jonathan has the ability to create worlds that are as real as the one you and I live in, but are visualized by his imagination. As someone who’s loved escaping into imaginary worlds since as far back as I can remember, I feel like the ability to physically escape into them would be SO awesome. (And SO dangerous, but that’s another story.)

Although no one in the book actually went to UMass Amherst, it was mentioned a couple of times as a possible college destination. As an alumna of the fine University of Massachusetts at Amherst, I got a kick out of seeing the university’s name in print.

Lucas Till as Jonathan

Why yes, the people on the cover influenced my casting decisions.

Relationship Status: Be My World-Maker

The idea of being able to get lost in other worlds is a seriously tempting one, Book. And although I didn’t wholly agree with what you used your gift to do, I can totally understand the reasons behind why you did what you did. (There are many times in my life in which I might have been very tempted to do the same thing.) I’d totally be willing to go out with you again, particularly if you could imagine up a world from one of my favorite stories.

In a World Just Right will be available April 28.