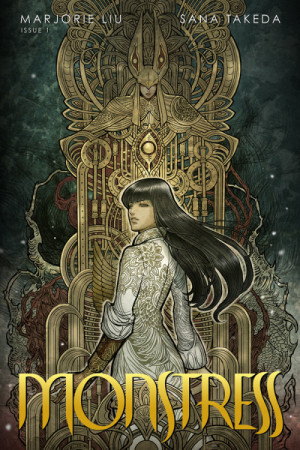 This last Wednesday saw the debut of Monstress, a new comic series written by Marjorie Liu, with art by Sana Takeda. Published by Image Comics, the first issue has 66 pages filled to the brim with awesome. Monstress follows a main character called Maika, who sets out on a vengeance quest against the backdrop of an alternate 19th-century Asia, and features a plethora of female characters and hauntingly beautiful artwork.

This first issue is an astonishing start to the series as well as a thought-provoking one: the authors have been very vocal in interviews about the series’ drive to portray different types of women and their stories. They examine the very idea of “monstrous”: what does it mean when we call a woman a monster, and what’s the context behind that? In a story about women, what does it mean to be called monstress?

There are no easy answers, of course.

Monstress also made me realize two things: how incredible this year has been for books and stories, and how the vast majority of the books I read and loved the most featured “monstrous” women, women who don’t fit labels or molds, who don’t conform, and who don’t fit into the stories society tells about them. And who are dangerous because of that. These women find ways to adapt, rage, fight, and use the tools at their disposal cleverly. They are agents of their own destiny. They fuck up big time and make mistakes and have to live with them. They get called monstrous because they tend to make people uncomfortable by simply existing and behaving like…people. I love these stories and these women: here are some of the best 2015 books about them.

Nimona by Noelle Stevenson: a graphic novel about a supervillain sidekick named Nimona. Nimona does not look like you expect her to look, does not behave

like you want her to behave. She has her own motivations for being a villain and doesn’t give a damn about what you think of her. This is actually both dark and cute, somehow mixed in a perfect balance.

Archivist Wasp by Nicole Kornher-Stace: I had no idea what to expect from this post-apocalyptic, dystopian adventure story with ghost hunters and supersoldiers. But Archivist Wasp, the character, knocked my socks off and the book is one incredible journey.  People fear Wasp to the point of isolating her from everybody and her life is a nightmare imposed by history and myths. Yet, she survives. She survives and goes on a heroine quest for answers and then…changes the world. In my head, I call this book Feminist Wasp.

Bitch Planet by Kelly Sue DeConnick and Valentine de Landro: A comic that has been causing ripples online for how awesome it is. The nonconforming women within this series are so feared by men they get sent to a prison on a different planet. This series follows the lives of these women on Bitch Planet and what they did to get sent there and how they deal with their plight. Bitch Planet is the in-your-face, angry, intersectional feminist story we have been waiting for.

son by N. K. Jemisin: Three timelines folded into one, telling the story of a woman’s past and present. It’s harrowing tale of abuse, slavery, and the attempted control over the body and soul of an incredibly powerful woman who is regarded as a monster for who she is. This tells a fantastic journey of self-discovery, identity, and purpose through the years.

About a Girl by Sarah McCarry: It’s probably safe to say that in mythology, the most monstrous woman of all is Medea, the child-killer. Enter Sarah McCarry, who has sympathy for Medea and for the contextual horribleness of her life. In this she is girl, a girl who falls in love with the main character, who is herself on a journey. Medea doesn’t necessarily find redemption, but her very monstrosity is questioned with empathy.

Sorcerer to the Crown by Zen Cho: Women using magic make men so uncomfortable in the alternate world created by Zen Cho that they are not even allowed learning to use their own magic. But, just like in real life, women break rules. Sorcerer to the Crown—a funny, light, regency romance romp—follows Prunella Gentleman who is not only a powerful woman, but also a powerful woman of color (the horrors!) in her ascent to become The Most Powerful Person Ever. This is delightful.

The Book of Phoenix by Nnedi Okorafor: The eponymou

s Phoenix in this book is a lab experiment, a genetic specimen. A true monstrosity to be kept, to be controlled and to be used at her masters’ will. The Book of Phoenix is a tale of revenge but also of identity— and a futuristic mirror to past and present.

Of Sorrow and Such by Angela Slatter: We can’t have a list of dangerous, monstrous, uncomfortable women without witches, real or imagined. In this beautiful, dark novella about sisterhood, Mistress Gideon is a real witch with a very real problem and difficult choices to make. Sometimes the darkest path is the only one to take.