A Little Bit of Grammar, Please! 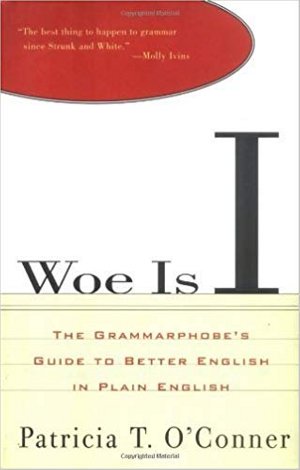 I’ve been yelling at the television a lot lately—and not just at politicians who are determined to create emergencies when there clearly aren’t any, and who dare to call my hometown (the great city of El Paso, Texas) some kind of immigration toxic dump.

My major pet peeve (aside from those things)? Grammar.

More and more I’m beginning to think that editors themselves don’t know grammar, if some of the finished audiobooks I’m listening to are any gauge. (I mostly only read ARCs, so I can’t really judge finished paper copies.)

So authors out there, I hope you’ll read these and see if you’re among the many writers who are making these mistakes. Please try to stop. You’re hurting my ears—and my heart!

Which pronoun is correct in this sentence?

My mother asked my sister and (I / me?) to go to the store for her.

The answer is ME. This type of conjugation is the easiest to fix, but more and more I’m seeing the wrong pronoun used.

I am not a grammar purist. I realize that writing often uses maverick grammar to make points or intensify a feeling. But these aren’t mistakes people are using on purpose. These are things people don’t realize are wrong.

If you’re using pronouns, here’s the BEST TIP EVER!

If you’re not sure what pronoun to use with a noun or another pronoun, take out the other piece of the phrase and ask yourself which one you’d use. You can use this clever grammar hack for all sorts of fun usage prompts.

The captain assumed that (we / us?) girls didn’t know how to fly!

The answer is WE. I know it sounds like it should be “us girls”—I think we’re being conditioned to hear these wrong!—but it truly is WE. Take out ‘girls’ in that sentence. You’d never say, The captain assumed that us didn’t know how to fly. (I certainly hope not anyway!)

Unfortunately this has become so commonplace in certain phrasing that it has started to sound more normal than the correct versions, which often sound awkward nowadays.

Because they loved history so much, the owner gave my roommate and ME a tour of the Colonial mansion. (The owner gave me a tour, right?)

When I was in high school, my brother and his friend Oscar used to scare the daylights out of my sister and ME. (They scared me. They didn’t scare I.)

The following seem confusing, don’t they?

Between you and ME, I think it’s going to be a very long day.

It’s just you and I at the store tomorrow, so be prepared.

It’s just you and I.

This sounds wrong, right? Technically, it’s not. Traditionally (and formally) the rule is, if a pronoun follows a linking verb (such as is, was), it should be in the subject (or nominative) case. These days, however, the usage has become so obsolete that it actually sounds wrong to say it in the technically correct way.

(One of my favorite articles explaining this is Grammar Girl’s very witty essay/podcast (here), which includes these lines:

Linking verbs are words like "is," "was," "were," "appear," and "seem," which don't describe an action so much as describe a state of being. When pronouns follow these non-action verbs, you use the subject pronouns such as "I," "she," "he," "they," and "we." Here are some more correct examples:

Who called Jodie? It was he.

Who told you about it? It was I.

Who had the phone conversation? It must have been they.

Who cares? It is we.

Now the problem is that 90 percent of you are almost certainly thinking, “Well, that all sounds really weird. Is she serious?”

This gets even more confusing when you’re dealing with more complex phrases.

The only writers at the conference were The Southern Belles, Marianne and I. (Yep. That’s correct. But that one too falls into the “it may be right, but it sounds really wrong” category for most people. That one I’ll give you without taking too much grief.)

So let’s look at, Between you and ME, I think it’s going to be a very long day.

Between is a preposition, so in that sentence ME is the object pronoun. And this is not obsolete, it’s just used incorrectly way too often. This rule applies to so many poorly constructed sentences we’ve seen lately.

Our neighbor Mr. Watson was a bachelor his whole life and when he died, he left his house to my sisters and ME. (He wouldn’t leave his house to I, would he?)

Okay, I’m just going to mention two other quick things. And I heard these in audiobooks, which means both the author and whatever copyeditors they used missed this.

Watch your past participles!

“She’d drank too much at the party.” Gah! She DRANK too much, or SHE’D DRUNK too much.

“He’d brung the best lasagna to the party.” Seriously. Both simple past and the past participle of BRING are BROUGHT.

Finally, these are two personal peeves, but writers please learn how to use this phrase:

It is not “change tact.” Blech. You can read more here.

And while this has become nearly obsolete too, writers always get extra points with me if they use the words between and among correctly. (Between refers to two things; among refers to more than two.)

I’ll get back to my usual lane next week, but in case you’re interested, some authors who got gold stars recently for good grammar are:

Kate Quinn—oh my goodness, you all must read THE HUNTRESS (I’ll write about it next week, but wow, great book!) And she used “changed tack” correctly! (ding, ding, ding)

Melonie Johnson—In this author’s debut, GETTING HOT WITH THE SCOT (Sometimes in Love Book 1, releasing 4/30), characters argue about grammar in a fun way that actually imparts a wee bit of grammar knowledge. (Will write about this one closer to release, but I really liked it!)

But if you’re looking for some great books on actual grammar, especially ones that aren’t boring or didactic, maybe give some of these a try:

EATS, SHOOTS & LEAVES by Lynne Truss  Most grammar sticklers love this one, though at times she can be a little, umm, stern? Still, a great and witty book about how to do it right, where the lessons may stick with you because of the unexpected ways she explains them.

WOE IS I: The Grammarphobe's Guide to Better English in Plain English (Fourth Edition) by Patricia T. O’Connor  Charm, wit and humor go a long way to explaining this grammar stuff, and she is the queen. (The Fourth edition was released earlier this month.)

GRAMMAR SNOBS ARE GREAT BIG MEANIES by June Casagrande  Casagrande has a number of books on grammar and language, and down-to-earth lessons wrapped up in humor and understanding (no matter where you are on the grammar-stickler spectrum).

And I just discovered, but have not read, THE DELUXE TRANSITIVE VAMPIRE by Karen Elizabeth Gordon! How fascinating and delicious does that sound???

So what about you? How do you feel about grammar? Or grammar books?