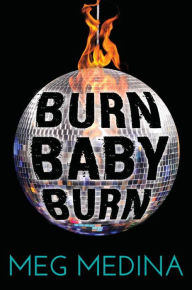 “What kind of mother tries to plunge a knife into your chest?” she says.
I chew on that for a second. There are other ways to kill your kid, a little bit every day. I think of the days Mima loses her cool. “Son el demónio,” Mima says about me and Hector, just loud enough for us to hear. We’re devils. “There are little knives,” I say.
“Huh?”
“You look fat today. That tight dress makes you look like a cualquiera.”
She nods slowly and mimics Mrs. MacInerney’s voice perfectly. “‘Oh, sweetie, you broke out again….’”
“Exactly.”

Where to even start? I love this book. Love it.

It takes place in 1977, and follows Nora López through the tail-end of her senior year and her first summer after graduation in Flushing, Queens. She and her best friend, Kathleen—Kathleen is headed off to college in the fall, Nora’s less sure—are looking forward to being done with high school, spending the summer together, and celebrating their 18th birthdays by staying out all night dancing.

But the summer of 1977 was a dark time for New York City. Young women—and their families—were terrified about being targeted by the serial killer who called himself Son of Sam. The city itself had no money, so schools and police stations and fire stations were working understaffed, sometimes even unpaid. And Nora’s home life is no picnic, either: there are the constant “little knives” from her mother that she mentions in the excerpt above, but even more difficult is living with—and trying to hide—the rapidly escalating anger and violence emanating from her younger brother, Hector.

It’s a top-notch historical. Medina weaves in details about the time—the movie Carrie prompted the “little knives” conversation—as well as specific events and slang and ’70s culture and descriptions of clothing and so on in a way that is so entirely organic that I felt like I was watching a movie that had actually been filmed in the ’70s. (I say “watching a movie” because I didn’t even notice myself turning the pages—I was that engrossed.)

She brings in threads about the feminist movement—and specifically intersectional feminism, and the questions that women of color raised about the movement, whether or not it was ACTUALLY inclusive, whether or not it was truly fighting for ALL women. She writes about the immigrant experience, about racism and socio-economics, about huge diversity in a small community, and the difference of dealing with law enforcement when you are poor and brown versus middle-class and white. And, as in life, all of those threads are wound together and tangled, they affect one another and can’t be regarded as separate entities—I don’t know if I’ve ever called a book “masterful” before, but I’m more than a little tempted.

In dealing with the Son of Sam murders, she evokes the terror without glorifying Berkowitz or downplaying the pain of the victims and the survivors. Overall, the whole book has such strong atmosphere—so much fear and frustration—and while there are moments that lighten it up, there’s always an undercurrent of tension that keeps everything off-kilter and the reader almost expecting the worst.

While the larger picture stuff has a lot to do with the overall tension, it’s Nora’s home life that really dials it up to 11. As she is bilingual, Nora is expected to deal with various authority figures in her mother’s stead, as well as serving as the go-between for communications between her parents. That’s a stressor in itself, and Nora is well aware of how unfair it is that her mother leans on her so heavily while constantly coddling her brother.

Which brings us back to Hector, who is either really troubled or a budding sociopath. Nora knows it, and underneath all of her denial, their mother knows it, too. He’s aggressive, petty and malicious, verbally and emotionally and physically abusive, and he’s a prime example of how, sometimes, domestic abuse is perpetrated by the young people in the household, not the adults. Nora is stuck between her mother, who wants to ignore all of the REALLY HUGE BLINKING NEON SIGNS that her son is turning into a monster—wants to chalk it all up to hormones, and a young man who needs the love of a good woman to set him straight (!!!)—between her own memories of who Hector used to be, and her observations and experience of who he is now.

If you’re not buying the rest of what I’m selling, pick this one up for the various threads about female relationships and friendships, especially the one between Nora and Kathleen. It’s complicated, it’s nuanced, it’s based in history and shared experience and love—but there are also divides, secrets, and long-standing microaggressions. I flail with love for the whole book, but their friendship is so beautifully written that it might be my very favorite part. I GUESS I’LL HAVE TO READ IT AGAIN TO FIND OUT.