A Little Peace and Quiet 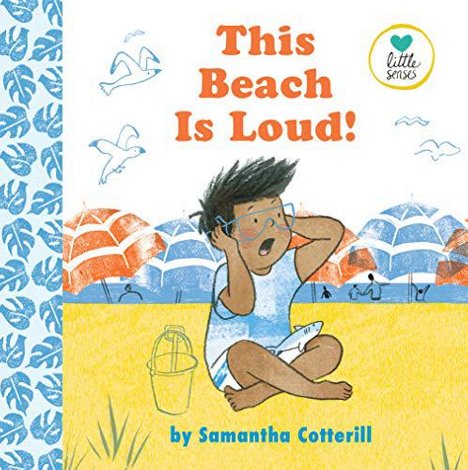 If you are an introvert, it can sometimes feel as if you live in a world that won’t stop talking. For introverted children, as well as children on the autism spectrum, this can be especially challenging. Picture books can be a safe and comforting space to explore what it’s like for introverts to move in what often feels like an extroverted world.

Samantha Cotterill’s This Beach Is Loud! is part of a new picture book series called Little Senses. The series is all about highlighting the experiences of sensitive children in such a way that their behaviors are destigmatized, while also providing examples of ways they can manage moments of sensory overload. Two books in the series have been released this month, the first one about a girl exploring new foods. The title of This Beach Is Loud!, the other book in the series thus far, tells you everything you need to know about the story’s conflict: It’s boy vs. loud noises in this reassuring tale.

It’s beach day, and an excited boy reminds his father of this at 4:00 a.m., leaping onto his bed to wake him: “Let’s go, let’s go!” In a spread depicting the two of them on their way to the shore, Cotterill illustrates the car bouncing along what looks like a watery, wavy road, and the blue of this wave is filled with the boy’s monologue. He is speaking excitedly and rapidly about beaches, the
“too crackery” crackers he’s snacking on in the car, and his need to pee. As soon as they arrive, we see his face fall. The beach is busy and loud, and the boy isn’t quite prepared for this, not to mention he’s not at all happy with how the sand feels on his body. But his father calmly guides him in finding a quiet spot on the shore and assists him in managing his behavior by asking him to “take a deep breath,” tap his fingers, and count to three. It’s not easy, but they escape to their own quiet spot, counting and tapping the whole way, and eventually enjoy a day of play.

The Little Senses series is being marketed as stories for children on the autism spectrum, as well as for children with what are called Sensory Processing Disorders. Indeed, the series is designed especially for such children, but as the Kirkus review notes, This Beach Is Loud! will also resonate with any child overcome by the sensory aspects of a new setting. It is a story that respectfully addresses the need children have to manage their own environments.

Another story that does the same (boy removes himself from a loud environment in an attempt to meet his needs) is yet another in a picture book series. Isabelle Arsenault’s Albert’s Quiet Quest is another Mile End Kids story, the first one being Colette’s Lost Pet (2017). Here, we meet Albert, who exits his home (one in a tight row of other houses) and mutters to himself, as he walks through his small backyard, “Ugh! It’s so LOUD in there ….” He settles himself in an alley behind his home, and straight ahead of him is what appears to be a pile of junk. One of those items, however, is a painting of the sun setting on a beach. Settling himself in a chair right across from it, Albert enjoys the peace and quiet, book in hand and a visit to the shore enveloping his imagination. Along come his friends, who also settle themselves in the alley, potting plants, playing badminton, blaring music, and generally engaging in imaginative play. Albert’s peace and quiet morphs into a genuine racket, and he snaps.

There is a happily-ever-after here—when his friends return (after dejectedly scattering), they bring with them their own books and settle quietly to read, and when Albert attempts to apologize to them, he receives an unexpected response—but even without that feel-good ending, the introverts of the world will happily recognize a kindred spirit in Albert. And they will feel like this is a book that gets them.

For an altogether more intentional kind of peace and quiet, look for Julia Denos’s Here and Now, illustrated by E. B. Goodale, in early September. While there have been a handful of picture books recently about meditation and mindfulness for children, this one is more like a meditative experience (or what Denos calls “a real-time meditation”) than it is a how-to guide. In fact, according to the closing author’s note, the story grew from a poem (called “In the Moment”) that Denos had once written as part of a meditation practice.

“Right here, right now, you are reading this book,” the story opens, Goodale depicting sets of hands that appear as if they are holding open the pages. Both author and illustrator immediately emphasize that, for 40 pages, we’re going to focus on the moment at hand.

This second-person voice is necessary for this immediacy to work, and the reader feels warmly invited to the meditative journey: “You are sitting, or you are standing, or you are wrapped up in a bed.” Denos writes about what’s under us and around us; the sounds that surround us; what is (or might be) happening at the same time as we notice the current moment (“An ant has finished its home on the other side of the planet”); what grows near us; and what breathes in our vicinity. Essentially, she writes, you—as the reader—are “becoming.” Right here. Right now. And if we open up our senses to notice it, our worlds will fill with possibility. Goodale takes this text, which is simultaneously abstract and concrete, and animates it with children moving through the world, in nature, and with one another. With delicate, but sure, lines; rich colors; and a sense of playfulness, Goodale’s illustrations delight. It’s wonderful to see Denos and Goodale collaborate again, as they did in 2017’s Windows.

“Unseen work is being done,” we read in one of the closing spreads of Here and Now. It’s a fitting way to summarize the interior domain of children, navigating their emotional needs in a world that can often be loud. All three of these brand-new picture books give them engaging stories in which to explore how it’s done.