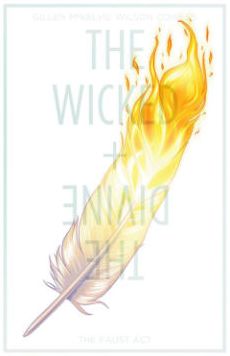 Kieron Gillen and Jamie McKelvie, the team behind the successful 2013 run of Young Avengers,go from teen superheroes to teen gods in this dark fantasy series. The Wicked + The Divine has a premise that sounds deceptively simple at first…

Every ninety years, twelve gods incarnate as humans. They are loved. They are hated. In two years, they are dead.

…but built upon this foundation is a story of power and consequences, teenagehood, fandom, fanaticism, celebrity, freedom, life, death and pop music.

The story plunges into this new cycle—a Recurrence—already under way and with some of the gods already “found” by the elusive, mysterious Ananke, a mother figure known to the Pantheon but who lives out of the public eye. She finds each member of the Pantheon by choosing their teenage counterparts—young kids who up until that moment had been living regular lives. Imagine that: one moment you are a regular teen, the next you learn that are not only the living embodiment of a god but also that you are going to die within two years. The Wicked + The Divine is thoroughly engrossing.

The narrative follows Laura, a young teenage girl who is deeply fascinated by the mythos and the allure of the Pantheon, not only as a fan but as someone looking for meaning and belonging.

The core of this first volume is divided between Laura’s obvious desire to become of the Pantheon, to follow them in their paths to stardom and whatever else the gods do in their free time, to be able to live and die in the flick of a finger; and the mystery surrounding the murder of a judge. The former is explored in the way that she gets entangled with these gods in different ways: she wants to be them, she wants to know who is next to be found; but she also wants to simply be there with them; she has a crush on Baal; she’s The Morrigan’s pet ally and becomes close friends with the troubled yet enthralling Luci(fer). That the gods reincarnate into the bodies of teenagers is a choice that lends itself extremely well to the type of story being told here because of the appeal of live hard/die young. The idea of being disposable, of living to the fullest only to burn out and die before reaching their 20s, though, is also depicted as illusory and this is painfully shown in the ways that the different gods and goddesses deal with their lot. This then connects to the latter storyline, to the larger mystery surrounding the Pantheon, and Luci’s predicament and supposed involvement in the murder of a human. There are secrets hidden within the Pantheon and this story is also one about scheming, murder, jealousy and much more.

Add to all that the fact that the story is beautifully drawn and populated with characters of color, diverse gender, and sexual identities, and you have my full undivided attention. It’s a great thing too that the series has been optioned for a TV show. Let us hope they don’t mess this up.

The first volume, The Faust Act (aptly named given the storyline around Luci), collects issues #1-5 and it ends with a bang. I thoroughly recommend having the equally excellent Volume 2, Fandemonium,in hand before starting this one. You will want it.

In Book Smugglerish: a wickedly amused 8 out of 10.