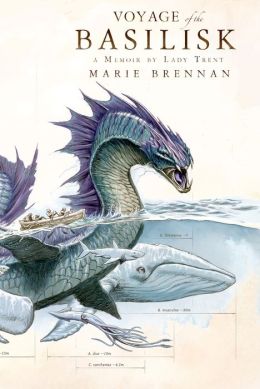 The notion of bringing my son along had come to me about two years previously. When I first conceived the notion of a trip around the world, to study dragons in all the places they might be found, Jake had been a mere toddler—far too young to accompany me. But such an expedition is not organized overnight, nor even in a single year. by the time I was certain the expedition would happen, let alone had prepared myself for it, Jake was already seven. Boys have gone to war at sea that young. Why should one not go in the name of science?

I had not forgotten the opprobrium I faced when I went Eriga, leaving my son behind. It seemed to me that the clear solution to this problem was not to stay forever at home, but rather to bring him with me next time. I saw it as a splendid educational opportunity for a boy of nine. Others, of course saw it as more of my characteristic madness.

In Marie Brennan's The Voyage of the Basilisk, the 2015 follow-up to A Natural History of Dragons (Book 1) and The Tropic of Serpents (Book 2), Lady and naturalist Isabella Camherst returns to penning her sparkling memoirs. This time, she’s on her grandest, most ambitious, and least well-known adventure ever—a two-year trip around the world aboard a vessel called the Basilisk, to study dragons wherever they may live. Along with trusted companion and expedition master Tom Wilker, an intrepid sailing crew, and her 9-year-old son, Jake, in tow, Lady Trent takes for the high seas in search for dragons of all shapes, sizes, and dispositions. Her journey will take her to the waters of Va Hing, tropical jungles of lush green humidity, to the islands of Keonga. And the dragons! She encounters dragons and creatures of all sizes and persuasions during her journey—from mighty unpredictable sea serpents, to fire-lizards, to komodo dragons, and great turtles.

Her two year journey also means scandal, once more, as she’s accused not only of a long term love affair with Tom Wilker, but the Basilisk’s captin, Aekinitos, as well as handsome scholar and linguist Suhail. (All of this, and with her young son along for the journey, no less!) Of course, this type of controversy is of trivial importance to the incorrigible Lady Trent—she’s far more interested in making her name as a scholar and naturalist, and blast any rumors of impropriety, or cultural taboo, that may stand in her way.

This third adventure of the widowed Isabella Camherst is very much what one has come to expect from the Memoirs of Lady Trent series. While the adventure and pacing is somewhat formulaic, and the books are not without their problematic elements, the narrative voice and integration of naturalist history is superb. The reason I keep coming back to these books again and again is simple: Lady Trent is one hell of a narrator. Written retrospectively from the vantage point of a much older and wiser Isabella Camherst, this series is a sparkling balance of dry wit, scholarly application, and honest ex post facto unpacking of adventure. Isabella is the main draw to this third novel in the series, especially as readers finally learn more about her and her emotions and thoughts as not only a scholar and a young woman eager to prove herself to the world, but also as a mother and someone in charge of her own exploration mission (at last). For the first time, Isabella is fully in charge of organization and planning for the journey—which, though it puts her in a position of authority, also opens a side of vulnerability to the seemingly unflapable Lady Trent. Though she is in command, she’s often initially reluctant to exude that authority early on, happy to let Tom handle diplomacy or shying away from outright saying that she is the master of the mission. It’s an interesting complication to a very forthright character—this, combined with her desire to “make her name” with her scientific findings (and having to later admit that some of those findings are completely wrong) is also humanizing and a different side to read for the adventurous naturalist.

The Voyage of the Basilisk also introduces a spate of interesting new characters—sadly, at the cost of dropping storylines of old favorites. In particular, Jake, Isabella’s adventurous and incorrigible son, is a fantastic addition to the series. Having been too young to have been of any interest in Tropic of Serpents, Jake’s inclusion on his mother’s mission around the world is seen as a scandalous move by Scirlandian society, but Isabella (as constant readers know) would never that stop common sense. There aren’t enough adventure stories about heroines post-childbirth, bringing said child or family with them upon said adventures: The Voyage of the Basilisk proves that this can be a compelling, awesome story when it’s written well. Jake himself is every bit his mother’s child—impetuous, curious to a fault, and, once his interest is captured, pigheadedly determined. Suffice it to say, I enjoyed Jake very much.

The other standout new addition is the linguist, polyglot, and scholar Suhail, who is the new subject of rumor rags in Scirland for Lady Trent. The difference being that this time, there’s a kernel of truth to those rumors (possibly). There’s lots and lots of fodder here for future memoirs, I’m sure.

While there’s plenty to enjoy with The Voyage of the Basilisk, the book is not without its drawbacks. More than any other book in this series, pacing is a problem in this third installment. Much of the first half of the book is throwaway drifting, and things only truly pick up in the novel’s second act (and then rush to a conclusion that could have been balanced more carefully). Also, frustratingly, Tom Wilker is given nothing to do in this volume (other than have a serious bout of dengue fever); sadly, Natalie is absent from this adventure, too.

As in previous books in this series, Isabella’s hypocrisy with regard to dragon killing (for SCIENCE) versus hunters and poaches (for PROFIT) is back in full force, though her attitudes are reflective of the time period (an analog of late 1800/early 1900s England), and Isabella’s views are drawn more convincingly here than in the prior two texts. More importantly, Isabella’s imperialist and privileged attitude continues to chafe (though to her credit, she is becoming somewhat more tolerant or at least educated in the ways and cultures of others). There’s a particularly interesting discussion of gender and sexuality when Isabella and her crew are stranded upon a Polynesian-inspired island—but while this exchange is expansive of the world and very welcome, I’m slightly uncomfortable with the continued tone of condescension from Lady Trent. Again, it’s in keeping with her character, but does that alone make it worthy or right?

Furthermore, in this book more than any other, I find myself questioning Marie Brennan’s choice to mask very clear cultures and behaviors when most customs and taboos are direct analogs of their real-world counterparts. Scirland is very much England; Yelang is very much China—there are very clear uses of Malay/Indonesian words and cultural settings, although the geography gets fuzzy and starts to morph Polynesian and South East Asian islands together into a single tropical soup. Too, there are certain things—a maori haka, the concept of tapu—that are actual things in actual cultures. The only difference, at least that I can see, is that each of these cultures in Lady Trent’s world live with dragons as part of the natural ecosystem. I’m not convinced that this alone is enough to justify an entirely different naming scheme for this world’s geographic and cultural landscape—but, again, your mileage may vary.

And, the truth is, if you’ve read this far, you’re probably as enamored with Lady Trent’s narrative as I am and are willing to see where she travels next. I certainly am.

In Book Smugglerish: a generally entertained 7 sea serpents out of 10.