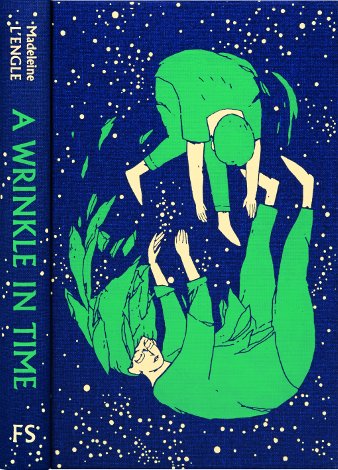 Image courtesy of The Folio Society

Serious book collectors may already know about the beautiful editions being published by The Folio Society, a longtime publisher of high-quality works of fiction. If you're not familiar with these definitive editions of fiction classics—particularly the science fiction and fantasy classics—then allow me to introduce you to some of the most gorgeous physical objects that bibliophiles can possess. Their books are lovingly crafted into works of art. Let me point out two volumes of particular interest to readers that crossed my reading chair…

A Wrinkle in Time by Madeleine L'Engle

Thanks to the newly-released film adaptation (starring Storm Reid, Oprah Winfrey, Reese Witherspoon, Mindy Kaling and Chris Pine), more readers are discovering Madeleine L'Engle's A Wrinkle in Time. L'Engle's story is about a thirteen-year-old girl named Meg Murry and her quest to find her missing father. The adventure begins when Meg's quirky and eccentric neighbor, Mrs Whatsit, mentions something called a tesseract. Meg learns from her scientist mother that her father (also a scientist) was working with a tesseract before his disappearance. Meg's younger brother, a five-year-old child prodigy genius named Charles Wallace, takes Meg and her new friend Calvin O'Keefe to see Mrs Whatsit. Mrs Whatsit has two equally bizarre friends named Mrs Who and Mrs Which. The three women tell Meg that they can help her find her father and transport her, Charles Wallace and Calvin away to a faraway planet using tesseract technology. Along the way, Meg learns that not only is her father a prisoner of strange alien entity on a planet where everyone must conform, but that Earth itself is in danger from a terrible evil.

A Wrinkle in Time is a fast-paced story filled with wonderful characters and imaginative creatures, and yes, young readers will find plenty of adventure to whisk them away. But the book also deals with many adult themes and ideas that older readers will find appealing, too. The story includes concepts and themes such as time travel, philosophy and religion. It is perhaps these resonating themes that has kept the book in print since it was first published in 1962 and why it appeals to so many audiences, especially younger ones.

I asked novelist Meg Rosoff—who wrote the fascinating introduction to Folio Society's dazzling slipcase edition of A Wrinkle in Time—about the book's enduring appeal: "I believe Madeleine L'Engle wrote A Wrinkle in Time with utter indifference as to what constituted a 'proper' book for children, which explains why it was turned down by so many publishers. She trusted that her young readers would be interested in the same difficult ideas that interested her—ideas of faith, philosophy and physics. When she wrote 'If the book will be too difficult for grown-ups, then you write it for children,' she understood that the people who are really interested in big ideas are not the middle-aged, with their mortgages and taxes, but children, who are continually grappling with the idea of what it means to be a person."

L'Engle's book serves as a kind of teacher for younger minds, too. Not just in the ideas it presents, but in how to find your own inner strength. "The idea that still blows me away, as it has since the first time I read the book in 1974, is the value and transformative power of our faults," Ms. Rosoff said. "It's such a radical idea to suggest that a person shouldn't merely aspire to patience, tolerance, kindness and restraint—but should treasure the opposite emotions as well—rage, impatience, passion, stubbornness, disunity and insubordination. I've pretty much lived by that philosophy."

The new film adaptation is the perfect time to read or re-read L'Engle's novel. Will fans of the book like the film? Ms. Rosoff has a simple litmus test: "The characters of A Wrinkle in Time have lived with me for nearly half a century: Meg, Charles Wallace, Calvin, Mrs Murry—and Mrs Who, Mrs Whatsit and Mrs Which. If the film manages to capture the strength and subversive power of L'Engle's characters, I'll be happy."

The Folio Edition of A Wrinkle in Time also includes a handful of evocative illustrations from accomplished artist Sam Richwood. I asked him about his creative process: "My illustrations were produced using a mixed bag of materials—but I guess acrylic and wax pastel crayons were my main tools of choice on this project. When I work in traditional mediums my mind still tends to focus more on value and color rather than the materials I'm using. If my paintings are starting to look a bit two dimensional, I know there's a great mix of crayons and spray paint at hand that I can quickly transform them with."

Richwood's illustrations fit the story perfectly, evoking the closeness of Meg's family. "Drawing is very personal to me," says Richwood, "so I tend to inject a bit of warmth into my work, even on commissioned pieces. It's great to hear that this helped in bringing the characters closer together. After reading the book I was stumped by how many scenes managed to be seemingly happy while also being rather bleak and sad. I knew that getting the tone right would be a challenge and my main goal was to achieve that." That tone included a soothing color palette. "I'm naturally very heavy handed with color when I'm left to my own devices," Richwood said. "I was really very nervous about this at first and thought about toning down the colors or possibly working digitally for this work... but the book is super fantastical and surreal so I decided to go with my gut and lay the colors on thick."

Above Illustrations © Sam Richwood 2015 for The Folio Society edition of Madeleine L'Engle's A Wrinkle in Time.

We by Yevgeny Zamyatin

Another novel gaining new life is the classic dystopian novel We by Russian author Yevgeny Zamyatin. Written in 1921 as a satirical response to the censorship imposed by the newly risen Communist Party, We depicts a futuristic Earth society that has become a dystopian police state. In the panopticon city of OneState, individuality and free will, seen as barriers to happiness, are forbidden and people are referred to by numbers. The novel is presented as a journal written by OneState citizen D-503, chief engineer of a project to send a spaceship being built to invade and conquer other planets. D-503 embraces the vision of OneState's Benefactor until he meets a woman named I-330, a revolutionary who steers him away from society's norms of conformance.

We was very controversial for its time. It was the first work banned by the Soviet censorship board. Itwas first published in New York in 1924 and didn't get a Soviet Union edition until glasnost came along in 1988. Despite its rocky publishing history, it has achieved classic status.

The Folio Society's brand new edition of We is the must-have edition that every classic deserves. I asked Tom Walker, Publishing Director of The Folio Society, about what makes Zamyatin's dystopian novel a timeless science fiction classic: "We is a classic novel regardless of genre. It is a brilliantly well sustained piece of political satire, powerfully imagined in the first person. I see it as part of a trilogy of great twentieth-century dystopias, alongside Orwell's Nineteen Eighty-Four and Huxley's Brave New World. Zamyatin himself was influenced as much by Dostoevsky as he was by H. G. Wells though, as the intensity of his prose attests."

Dystopias seem to be coming back in fashion, so perhaps now is the perfect time to discover (or rediscover) We. "This is an angry and a fearless novel. Zamyatin was writing against the totalitarian state and the mechanisation of humanity, where individuals could be treated as nameless sets of data," Walker said. "This seems particularly pertinent now with the dual global threats of rising anti-democratic politics and the megaliths of the web invading the individual domain. Zamyatin's cry for freedom, for the recognition of the individual soul, has sadly never been more relevant."

This new edition of We includes an introduction by Ursula K. Le Guin, first written in 1973 but as insightful as ever. It also includes set of wonderful illustrations by Kit Russell that perfectly match the tone of the novel. About those illustration, Walker says, "Strangely enough we first saw Kit's illustrations when we ran a competition to illustrate Brave New World—a book I see as We's sister novel. They were perhaps too monotone and complex to illustrate that novel of gaudiness, but for We his style is perfect. With their fractured lines and dislocating perspectives, I found the illustrations reminiscent of the Russian Futurist movement of the early twentieth century—a perfect foil to the novel."

I've saved the most noticeable thing about Folio Society's edition of We for last: it's the lined window on the slipcase that creates a striking animation effect when the book is removed or inserted from the case. On that particularly remarkable design, Walker says, "Alongside our usual production values which make this, hopefully, the finest reading edition available, we followed Kit's lead in wanting to experiment with materials. His lenticular binding and slipcase is a perfect match of form and function, melding the individual profile with the mass of humanity; warning the reader of the kaleidoscopic effect of the novel they are set to read."

Above Illustrations © Kit Russell 2018 from The Folio Society edition of Yevgeny Zamyatin's We.