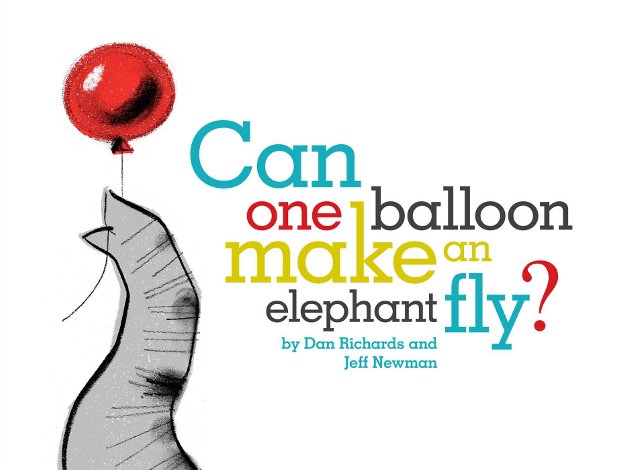 The Kirkus review for Dan Richards’ Can One Balloon Make an Elephant Fly?, illustrated by Jeff Newman, notes the following: “[T]his is one of the first books to so accurately portray what parental cellphone use may look like to a child and how it can affect parent/child relationships.” This is true, you observant reviewer, you, I found myself saying altogether too enthusiastically to the review itself. (I probably need to get out more.)

There have been a number of picture books of late that address adults with their heads all up in technology, thereby leaving a child protagonist high and dry and seeking outdoor (and highly imaginative) adventures of his or her own. As but two examples, there is Matthew Cordell’s Hello! Hello!, published in 2012 (how I love that book, and here’s where Cordell and I chatted about it back then), and Aaron Becker’s Journey, which received a 2014 Caldecott Honor. But here is a picture book that shows, in one of the opening spreads, a boy asking his mother a series of questions. She’s staring into her phone instead of engaging with him. The disappointment on his face and the way he gives up on her is very nearly heartbreaking. We all do it (well, most of us)—this staring-into-our-phones nonsense when we should be attending to the world around us—but here’s a picture book that shows, as the reviewer notes, how that looks from a child’s point of view. But I’m getting ahead of myself. Let me tell you a bit more about the book’s storyline.

The first thing I like about it is that the title itself is a question (“Can one balloon make an elephant fly?”), and when you first open the book and take a look at the jacket-flap copy on the left—where there is usually entirely too much text, summarizing the book—you see merely: “Maybe it can.” I love this. Not fussy at all. Simple. Tantalizing. A lot like the rest of the book.

The endpapers show us a cityscape, and the page turn reveals a zoo. (A fun thing to do, incidentally, is talk to someone who works at a zoo about the way zoos are often portrayed in picture books. One of my best friends is a Curator of Behavioral Husbandry and has worked at zoos all her professional life, and the way that zookeepers are usually illustrated in hats greatly amuses her. You know, like this. The animals are also usually not penned in, but then if they were, this would hardly make for exciting spreads, would it? But I DIGRESS.) On the title page spread, a boy points at an elephant, turning to ask his mother a question. She has taken a break and is staring into her phone. His question, the book’s very title, dominates the title page. The entire story, in fact, is comprised of dialogue in speech balloons.

She answers “no,” but it’s clear she’s not even heard his question, as she continues to stare at her smartphone. The boy looks down, chin in hand, pondering his question, realizing he might be on his own as his mother is so clearly not attending to his need. (Right here, Newman nails the vulnerability of children in this boy’s one stance.) He knows he’s being shunned, but he boldly forges on. “Can two balloons? Three?” When she says to him, “Evan, please,” he sadly plops down, playing with a toy elephant he’d clearly purchased in a zoo shop. It dawns on his mother that she’s failing him. She puts her phone away, gets down on his level, and tells him that one balloon is “definitely enough to make an elephant fly.” Check out his reaction (on the right) in the spread below. No words needed.

The mother is now all in. She has a zoo shop bag on her arm, filled with miniature toy animals. She ties balloons to each one, determined to show the boy that, indeed, balloons can make at least these tiny toy animals fly. But the kick here is that the boy is too taken with wonder over the real, large animals he passes to even notice this. So he attaches to each real animal, as they pass through the zoo, the number of balloons he has asked about. Finally, his mother asks if he is ready, and then she releases the tiny toys that she’d tied to the balloons. The boy is still gazing wide-eyed at the large creatures in the zoo, not his mother. She turns to him to say, “We did it. Aren’t they amazing?” They hug. And, as they do so, we see on the penultimate spread that the real zoo animals have also taken flight. On the final spread, we see them flying over the gray city, the balloons tiny pops of color.

Illustrator Jeff Newman has always been a favorite of mine. He’s got a style all his own, and I was happy to see he’d released this new illustrated title. Anyone familiar with his Hippo! No, Rhino! (now ten years old)—that sly, clever, little slip of a book—knows how entertaining he can make a zoo. (That one features a baffled zookeeper—in a hat, of course—who doesn’t quite know his animals, always whistling a tune while he just guesses at the correct signage for the poor rhino protagonist. So funny.) In Richards’ book, Newman nails the body language and facial expressions—and with a seeming simplicity—of the boy and his parent. The digitally-composited art is rendered via charcoal and crayon. Newman knows just when to scale back, showing us the zoo from a distance, and knows just when to zoom in on the mother, determined to make things right, and her curious son.

Hold the phone for this one. (You knew that was coming, right?) Its hint of magic—floating elephants and flying gorillas—makes it a treat for readers. Best of all is the magic between mother and child, who are present for one another.