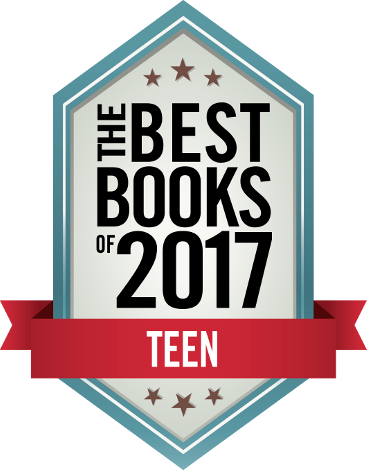 Among the Best Teen Books of 2017 readers will find a wild variety of formats and genres: graphic fiction, graphic memoir, steampunk, thriller, romance, fantasy, science fiction, poetry, biography, narrative nonfiction, and contemporary realism. And there’s some pretty fabulous historical fiction as well, books that will give an audience that tends to look forward varied, nuanced looks at where we’ve come from.

In Crossing Ebenezer Creek, Tonya Bolden introduces readers to two African-American teens looking to make new lives in the immediate aftermath of slavery. Mariah’s just been liberated by Sherman’s forces, while Caleb drives a wagon among the growing throngs of the newly freed who follow the Yankees in their march. With telling details, Bolden brings readers into this surreal existence, where trust is a rare and hard-earned commodity.

Melanie Crowder takes readers to 1999 Bolivia in An Uninterrupted View of the Sky, in which dark-skinned, 17-year-old Francisco knows his future is limited by his mixed, Aymara heritage. That future becomes even more limited when his father is arrested on a false drug charge, forcing Francisco and his little sister to move into the notorious San Sebastián prison with Papá. With Francisco’s urgent, present-tense narration, Crowder invests readers in his struggles to protect father and sister and finish high school.

Petty, white English noble “Monty” Montague’s struggles seem mostly to be of his own making in Mackenzi Lee’s A Gentleman’s Guide to Vice and Virtue, but as the bisexual young libertine drinks and offends his way across 18th-century Europe, readers see the forces that have created this staggeringly appealing young man. They also see what he doesn’t: how his little sister, nominally in his care, has fierce ambitions of her own and how their family friend (and Monty’s love), biracial Percy, can never take the place he deserves in their racist society despite his noble upbringing.

Newfoundland in 1986 is the setting for Heather Smith’s The Agony of Bun O’Keefe, in which the titular character, a 14-year-old white girl, leaves home when her mother tells her to get out, taking herself to St. John’s, where she finds herself a found family more loving and nurturing then her blood family ever was. Smith grounds modern readers in this 30-year-old world, braiding in issues such as racism, homophobia, and transphobia that bring home the truth that yesterday is very much relevant to today.

And in The Pearl Thief, Elizabeth Wein brings back Julie Beaufort-Stuart, the unforgettable British spy of Code Name Verity. In this prequel, set just

before the war in 1938, the 15-year-old white girl is not yet a spy, but she becomes caught up in a web of related crimes on her late grandfather’s Scottish estate, crimes that are all too easy to pin on the nearby Travellers who also have ancient ties to the land. It’s both a stand-alone mystery that delicately touches on race and class and a brilliant origin story for a beloved character.

But don’t limit yourself to these five—there are a lot more to choose from.