Love is Universal - A Conversation with Sonali Dev 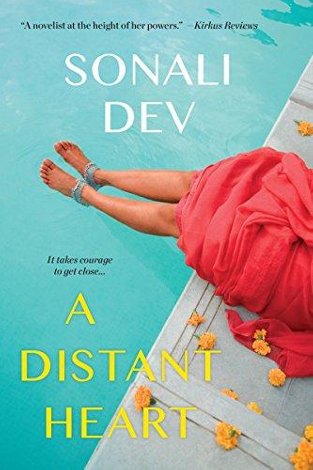 For the month of January, I’ve decided to do a series of interviews with authors at varying stages of their careers. Last week, I featured Rachel Gibson, a long-standing queen of the romance genre. Today I’d like to introduce you to Sonali Dev, who released her fourth book, A Distant Heart, last month.

If you follow me at all, you’ll know that I was an early, ardent fan of Sonali Dev, and called A Bollywood Affair a stunning debut. I was not, and am not, alone in my praise of the author, or the books. Every title has made it onto some end-of-year best of list, many of them multiple ones. Not surprising, since there is so much to love about them.

Not only is Dev great at setting up romantic conflict and writing a breathtaking scene that exquisitely expresses a broad spectrum of emotions, but she is among the very best at telling a story that represents the intricacies of human nature against the backdrop of a community that is at once unfamiliar to a typical American reader and also distinctly universal.

While all four titles are loosely connected (and the last two closely), each book has a completely different tone. Dev says, “When I meet readers and they ask me where they should start, I tell them it depends on what they like to read. They’re all very romantic, but stylistically, there’s a huge contrast book to book.” She describes them, in order, as romantic comedy, angsty intense romance, crime and suspense with a huge grief element, and then, in A Distant Heart, a little bit of all three.

(Dev expanded on this in another fascinating Kirkus Media interview that came out earlier this month.)

I love them all, but I do think Distant Heart is the most complex. It’s also the first of Dev’s books that doesn’t set foot in the U.S. It mostly takes place in a neighborhood of Mumbai, though main characters Kimi and Rahul also travel within Asia to investigate Kimi’s heart transplant trail. It’s also the first book in which Dev uses dual time lines, narrating the story both in the present and the past, when wealthy, privileged Kimi meets Rahul, a child from a significantly lower circumstance.

Asking Dev about this aspect of the book led us into a conversation about her writing process, especially in light of the narrative shift. “Of course all of my books have heavy back story. Bollywood Bride and Bollywood Affair are stories that start in the past, even if I never told them from that narrative perspective. And I never write completely linearly. There are always pieces that I write out of order, because it helps me clarify points in the plot or facets of the characters, and I write them as they come to me, and then I integrate them into the full story at the appropriate time.”

Dev notes that while Bollywood Bride was her second release, it was the first book she ever completed, and it was the one that helped her figure out her process. “It took me a while to figure out how to tell that story. It’s set in the present, but so much of the story depends on their past romance. Who they were and how their happy-ever-ever was thwarted. When I figured out how to go back and when to go forward, everything kind of clicked, and the writing went much more smoothly.” Similarly, says Dev, it took a while to figure out exactly how to write Distant Heart. “It started as a linear story. The story begins in their childhood and that was my original starting point, when they meet. But once I realized I needed to shift from past to present and write it in different time lines, the book sort of fell into place.”

Dev considers herself somewhere in the middle of plotters and “pantsers,” since she has a firm idea of who the characters are. “There’s something wrong with them and their lives that keeps them from being truly happy. I know what those things are. I can identify major turning points they have to move through, even if I don’t exactly know, plot-wise, how that’s going to happen at the scene level. All of those things are in my head when I start writing.”

Her writing has been acclaimed for many things, including lush prose, emotional impact and romanticism. This book has it all, and more. The Kirkus (starred) review begins, “A young Indian woman is finally healthy thanks to a heart transplant, but when she becomes the target of a notorious crime lord, she has to depend on the man she loves to protect her.” That man, of course, is Rahul, who is now a renowned police officer. (Read the full review here.) The two begin to investigate her heart transplant, but also explore the many years they’ve shared, trying to navigate an intense relationship that sits uncomfortably between health and illness, wealth and poverty, guilt, honor, regret, hope, determination and unworthiness.

The writing is beautiful, the characters are unforgettable and the story sits in your heart like a cherished friend.

If you’ve read Dev before, you already know this. If you haven’t, you really, really should.

It’s what reviewers and fans have been saying since her first book came out, and since it seems clear that she was born to do this, I asked her what made her decide to start writing and pursue publishing. It turns out she’s been a writer since as far back as she could remember, but more journaling, then journalism. It took a while for her to reconnect with her first love, fiction, but once she did she never looked back.

“There was this incredible moment, and I still remember it so clearly. I knew I was doing what I was meant to. This is why I’m here. I don’t mean it in a grand way, but in a way that combines stories I love and want to tell with the intention of making a difference in how my culture is perceived by those outside it.” Dev, who was born and raised in India and came to the U.S. for graduate school, had a fairly benign immigrant experience, but knows her children, now teenagers, struggled more.

“I want to be part of the solution. I want to write books that represent the way America looks today, and that reflect the many facets of my culture, so that the children to come, my children’s children and their friends, fit more seamlessly into their community. And that community, which is also my community and their community, is more welcoming and embracing of all perceived differences. So that no children will ever feel alien in the places they live.

“We are humans, and we feel the same emotions. We have the same hopes and fears, we share the same passions and vulnerabilities. If I write about these things that are universally human in the context of things that may feel uniquely Indian, I might change minds, open them, and my grandchildren might have the chance of living in a world where their experience feels entirely normal. Whether it’s a week-long Indian wedding or a universal love story. That’s important to me.”

If you haven’t already, I sincerely hope you’ll pick up a Sonali Dev book. Her complex stories are a tribute to the glory of falling in love and the complexity, elegance and chaos of being human.

1) Wrong to Need You, Alisha Rai-- The way Alisha writes angst is addictive. Sadia and Jackson, are exactly the kind of deep, layered characters who feel like real unforgettable people (*starred review here)

2) Now That You Mention it, Kristan Higgins-- Higgin's writing has the unique ability to make you laugh and cry with equal fervor in the same book, sometimes in the same paragraph. I love her writing with the heat of a million suns. (*starred review here)

3) Royally Screwed, Emma Chase-- This book totally blew me away. Hot and intense and so real, which is insane given that it's the most escapist story about made up royals that she makes you want to swear are really not made up at all.

Also, Falguni Kothari's My Last Love Story and Alexis Daria's Take The Lead, both so well written and so incredibly endearing they stay with you long after you're done.