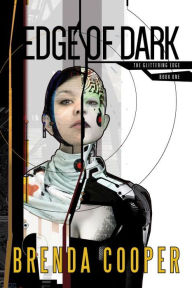 “And they really expect all humans to make the same choice? Are they that naive?”

“Are they unified? Do they all want the same thing?” Nona pressed.

Yi answered. “The ones we’ve met are.”

Nona looked from one to the other. “If you were still human, what would you do?”

They looked back and forth between each other, their facial expressions subdued.

Thousands of years ago, we took to the stars. Earth is a dream of the past, and humans have created worlds, cultures, and entire new social structures in the vast expanses of the solar system and beyond. With expansion and progress comes technological change, too, and humanity creates its first artificial intelligences. But, as societies that have built self-aware robots are wont to do, humanity took its great creation and banned it to the darkest recesses of deep space.

Centuries later, the banned robot-humans of the deep are grown in number and solidified in their desire—and they make their move against the humans of The Glittering Edge, The Diamond Deep, and restored natural worlds like Lym. These intelligences are the boogeymen and nightmares of humanity’s collective consciousness; “Ice Pirates” to some, “the Next” to others.

For Nona Hall, representative of The Diamond Deep—an exceptionally well-connected biology teacher, but recently bereaved (and now rich beyond her wildest reckoning)—the invasion of the Next means another deep loss. Her best friend, Chrystal, is lost when the Next take over the space and research station High Sweet Home.

For Charlie Windar, ranger and representative of the ravaged and now repaired natural planet Lym, the invasion means a threat to his homeworld and everything he holds dear—including Nona Hall.

For Chrystal and her family, Yi, Jason, and Katherine, the Next means death—and rebirth. Unmade and resurrected into new synthetic bodies, Chrystal and her quad-marriage spouses find themselves connected in a way never before thought possible. And now, Chrystal must convince her best friend that the Next will take what they want, they will expand into the inner reaches of the solar system from the icy depths of space, and they will win.

The newest novel from Brenda Cooper, Edge of Dark is a challenging, expansive, and thought-provoking space opera (and, thankfully, the first book in a new duology: The Glittering Dark). From Blade Runner to Ex Machina, Terminator to Robopocalypse, science fiction is rife with stories about artificial intelligences that rise up against their human creators (and, often, enslavers). The reasons these stories are so compelling are varied—sometimes it’s because of the rousing human element, rallying against impossible odds (because if the machines rose, we’d have little chance of success). Sometimes, it’s because of the AIs themselves as they struggle with the concepts of exceeding their creators and being self-aware (because we humans tend to personify our inanimate, sentient objects in fiction). Sometimes, oftentimes, it’s because of the action and battle sequences that such stories inspire, both on the page and on the screen.

In the case of Edge of Dark, however, the question of Human versus Robot is…not what you expect. Told through the alternating perspectives of Nona, Charlie, and Chrystal—three characters with three different desires, goals, and payoff matrixes—Edge of Dark examines the effect of spawned and evolved Artificial Intelligence on a far-future human society. And it does so in an amazingly incisive, challenging, and brilliant ways. Nona’s narrative is passionate and reactive—she grapples with the loss of her parents, then the loss of her best friend, and the pending possible doom of humanity. Charlie is more insular and protective, both of Nona and of his home planet Lym—which he will desperately safeguard against interlopers (human and AI alike). And Chrystal…well, Chrystal’s story is what really defines Edge of Dark. An empathetic human working with her family to genetically modify and perfect new animal and food sources, Chrystal is a gentle soul who is unmade and remade into a thing she never wanted. With her transition from human to something else, something evolved and self-aware and interconnected with the rest of the Next, Chrystal’s journey is powerful stuff.

It’s through Chrystal’s story that we learn just how different this next evolutionary step is removed from humanity, and just what such intelligences might want.

It's this exploration that is so compelling, and what makes Edge of Dark such a rewarding read. The pacing is on the slower side, but stick with it. This isn’t an action-packed, explosion-laden story about machine versus man; it’s a story that explores the “what ifs” in beautiful, dazzling fashion.

In Book Smugglerish, 7 glittering robotic consciousnesses out of 10.