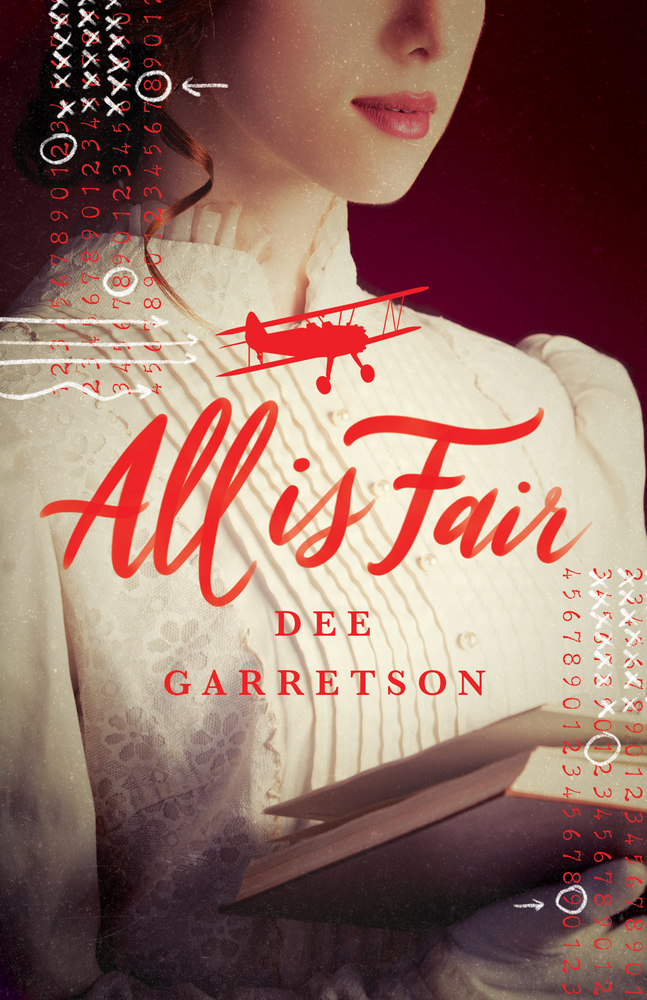 BOOK REPORT for All Is Fair by Dee Garretson

I’m usually pretty anti-Big Faces on covers, but this one works! It does a great job of saying, “Hey, this is a historical novel!” while also giving you some sense of the time period with the little airplane detail. I also like the numbers over the photo, even though the ciphers in the book use letters instead of numbers. Title treatment is good, too. All in all, not a bad cover, and one that caught my attention right away since I was in the mood for some historical fiction.

When Thomasina “Mina” Tretheway receives a cryptic message from her father, a valued secret agent with the British army, she quickly rushes home from boarding school to her family estate. There, she finds her brother’s best friend Andrew and a handsome American named Lucas, who are using Hallington Manor as home-base while they formulate a plot against the Germans. Mina wants to be of service, but feels relegated to house-hold trivialities, until a German spy is uncovered in the house and tragedy strikes. Now, Mina finds herself thrown into the midst of World War I, traveling across Europe to help Lucas in a secret plot that could turn the war around for her country.

Mina is funny and brave, and I admired her from the very start when she yelled out the train window at Lucas. I wish I could flirt with that kind of confidence! Even when she was stuck at Hallington Manor, she never let fear stop her from following her instincts. And when she was finally thrown into the thick of it, there were a few times when she was frightened, but that was to be expected! Some of the situations Mina found herself in would’ve received a big, fat NOPE from me. I admired her courage and her dedication to the cause.

I really feel like this book was meant to be swoonier than it was. Cute American Lucas seems to think that Mina is a spoiled brat and wants little to do with her at first, but once they’re thrown together on a secret mission, things start to change. All the elements are there for a super high swoon score: two people who don’t like each other much at first, bonding over an intense situation, forced to problem solve together, etc. But none of that really clicked for me. I never felt like Lucas really disliked Mina, and then I didn’t feel his feelings about her start to slowly change, so there was no build up to add heat or tension to their inevitable get-together.

While All Is Fair is set in 1918, Dee Garretson manages to write prose that feels true to the era without ever feeling dense. This would be a great intro to historical fiction for younger readers. However, I felt the pacing was seriously problematic. The first half of the book is extremely slow. Very little happens, and what does happen is of almost no consequence to the overall story. I was nearly 150 pages into a 270-page book before the action really began, and when it did, whew boy, it gave me whiplash.

I know a lot of people who love code-breaking and ciphers. With a secret agent father, Mina was raised to look for codes and hidden messages, and seeing a girl be so good at something that was typically reserved for men in 1918 was a refreshing change.

I’m always down for a WWI book, because I feel like those are a veritable unicorn in YA. All Is Fair throws you right into the action of the war, but the spies and secrets made it a bit more compelling than a typical war book.

Book, when I read your description, you seemed too good to be true. Romance! Intrigue! Spies! Secret codes! I was really excited to get to know you, but once I did, I felt a bit betrayed, because the story you told didn’t quite match up to the thing you promised me. And for that, I think we should go our separate ways.