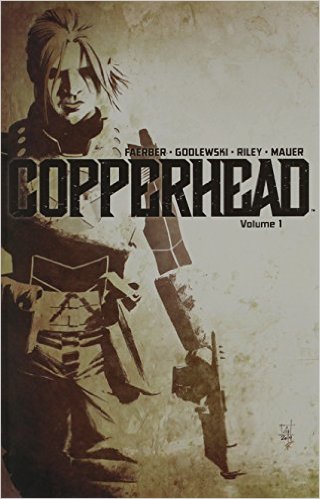 In my quest to discover new and exciting graphic novels to share with you here on the blog, I came across something with familiar themes executed with nice twists and turns that kept me turning the pages. Again, I find myself harvesting from the Image Comics catalog, where owner/creator comics continue to thrive and impress.

The book is Copperhead Volume 1: A New Sheriff in Town. In it, you have those familiar elements I mentioned a second ago; a single mom starting over in a new place to provide a better life for her son, a frontier town on the edge of civilization, a new sheriff in town, the shadow of a recent war hanging over the heads of everyone. Some of the more surprising elements? The mom has taken her son across the galaxy to a different world; the town is full of several different species including those who lost the war; the sheriff is also the mom, and her deputy one of those who lost the war. So, it’s a science-fiction Western, police procedural, and family drama all wrapped up together, and I couldn’t put it down.

The worldbuilding is quick and clean, giving you just enough to be comfortable with the setting while the characters start showing us who they are. Clara is a mom and a sheriff. Her priority is her son, Zeke, and then protecting the people of Copperhead, in that order. Budroxifinicus is her deputy, and she and Zeke call him “Boo” for short—which he hates. Boo isn’t happy with Clara’s appointment as sheriff, feeling he is more than qualified and that the only reason the job wasn’t given to him is racism: Clara is human, Boo is not. Other characters include the quintessential rich rancher type in the form of a mining mogul who runs everything and immediately clashes with Clara, the “natives” who live out in the badlands, various other species, and the Arties—Artificial Humans created and bred specifically to fight in the war against Boo’s people.

In one fell swoop, you get a big bite of many social issues that we see and struggle with today, under the guise of a science-fictional story and setting—things like sexism, racism, classism…lots of isms. This is what science fiction does best, in my humble opinion. Through it, we can take a look at ourselves and our world through a “safe” lens where we can learn and grow. I like Clara’s arc, which takes place in just 128 pages, as she comes to terms with her own racism against the Arties and the impact her job has on her son, on the decisions he makes about his own life. Powerful stuff.

aspect of the story is interesting and drives the story forward, threaded through various subplots—or what seem like subplots—to bring it all together by the end in a fairly satisfying conclusion and sets up the next chapter.

The science-fiction elements aren’t over the top or in your face. This is a very small, character driven story in a much larger universe I’m pretty sure we’ll see more of as more volumes come out. Although we don’t get a lot of backstory on the war or the other species who fought in it, we do get glimpses of them living in the town, interacting with our main characters. Again, I think we’ll get more in later volumes.

The art here is very crisp and clean and I like it a lot. The cover is absolutely striking and was the first thing that caught my eye.

Created/written by Jay Faerber and co-created/drawn by Scott Godlewski, Copperhead is another great book from the folks at Image.